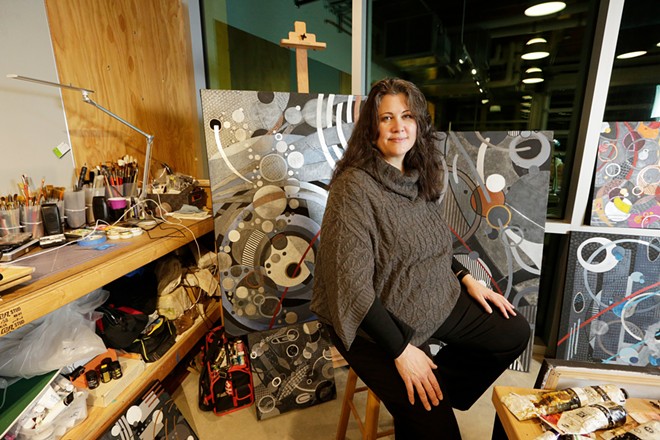 Stefani Rossi scaled a series of small artworks during her Hive residency.

Llike many people in their careers, the productivity of the artist Stefani Rossi correlates with his immediate resources; working in a small studio (aka his living room) in his 600 square foot apartment accordingly means small paintings, no more than eight inches in diameter.

“My definition of a good painting is: they work from afar and also up close,” says Rossi, whose home studio has limited his ability to spread out his work at a time. And messy materials like oil paint were also not feasible.

Then she got some super sweet news. In August 2021, Rossi joined four guest artists and a writer to become the first cohort to receive six months of free studio space at The Hive.

The Hive is one of three Spokane Public Library facilities resulting from the 2018 voter-approved bond measure that also funded new Hillyard and Liberty Park locations.

Located at 2094 E. Sprague Ave., The Hive has three roles. The building houses Spokane Virtual Learning, which had outgrown the neighboring Libby Center in the East Central neighborhood. It also offers free meeting spaces, including a room with running water and a garage door opening to an outdoor space for art classes and receptions. The third function is the guest artist or residency program.

The residency may imply that the guest artists live in the space (this is not the case). Instead, artist-in-residence The Hive provides studio space for a fixed term â€“ up to six months â€“ and artists provide their own tools and materials.

Artists must also adhere to conditions such as event scheduling (mostly suspended due to health protocols) and studio hours during which the public can view or interact with artists.

Rossi, who requested to share a studio with fellow artist Shantell Jackson, posted on her website when she and Jackson would be in the studio, which is otherwise locked down, as is The Hive building.

Like many people over the past two years of COVID upheaval, Rossi was feeling the effects of isolation, she says, noting that she looked forward to reconnecting with the community throughout the residency.

“We had to find a balance between being a good ambassador for the program and ‘Hey, I’m in my space to work,'” Rossi said.

Rossi spent the residency enhancing an abstract series she calls knext, “an exploration of the rhythms of human interaction: isolation, connection and belonging.”

Having room to spread out her high-end paintings â€” on tables, on the plywood wall, on easels â€” made a big difference in helping her self-criticize her work and her process, she says. “I can see them in the context of each other.”

Workspace of artist-in-residence Shantell Jackson at The Hive.

The Hive residency, Jackson says, allowed her to create larger pieces for her Terrain Gallery show in October 2021, the same month Spokane Arts hired her as program director. Now, her goal is to complete a set of works by February, when her residency is over.

The Hive studios are between 540 and 800 square feet â€” larger than Rossi’s apartment â€” and are designed specifically for artists, says Eva Silverstone, arts education specialist at the library in charge of the residency program.

The spaces have concrete floors, plywood walls, and abundant natural and overhead light. Wall-to-wall storage and rolling tables allow artists to leave everything behind and customize the space to their needs, says Silverstone, who is also an artist and Spokane arts curator.

The Hive program encourages collaborations and isn’t limited to specific media or artist types, Silverstone says. In addition to Rossi and Jackson, for example, the inaugural group includes a photographer capturing images of BIPOC community leaders and a textile artist.

When health protocols allow, programs intended to facilitate more interaction with residents and the public should resume, says Silverstone, who is currently reviewing applications for the 2022 cohort. This includes workshops, artist-led discussions and regular open studio hours. Plans are also still underway to exhibit residents’ work at the Central Library, which is expected to open this year, Silverstone said.

Rossi says “the promise to exhibit at the library is no small feat”. Perhaps even more significant, she adds, is how “The Hive is Spokane’s way of affirming the importance of art.” â™¦