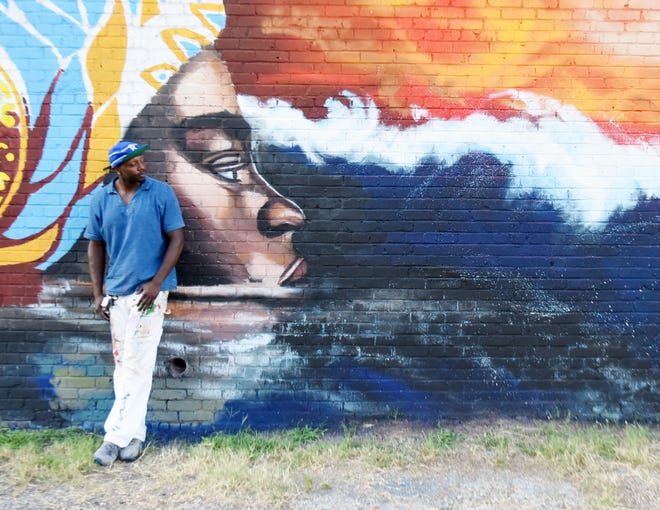 You may have seen bright and colorful murals popping up all over Shreveport lately and wondered what was going on. Artist Ka’Davien Baylor has left his mark on the city in hopes of inspiring change and creativity.

Baylor jokes that he’s been an artist since birth, but that’s mostly the truth. At two and three years old, he draws on the furniture and walls of his childhood home. As he got older, Baylor became an entrepreneur and began selling commissioned drawings of other students’ favorite cartoon characters.

“In college, I started drawing rappers and stuff like that from Source Magazine, going more into realism,” Baylor explained. “Then I started getting into the talented art program at Caddo Parish and the Norton Art Gallery, I did some things with SRAC and some of their art programs, and then I moved on to college.”

Despite his obvious passion for art, Baylor began his college career wanting to get into chemical engineering. It didn’t take long for him to realize that he needed to pursue his passion and not the money to thrive in life.

“I was like, ‘don’t play yourself, stay in the realm of what you’re good at’ and I read a lot about self-help and just tried to find out more about myself and how to be more impactful in my life,” Baylor said. “I was starting to realize there was more to life than the surface level, so I changed my major from chemical engineering to communication design and that was perfect.”

Baylor worked in oil and gas to pay his bills while doing art on the side, but now public artist is his full-time job. Houston, Texas-based artist Reginald Adams took Baylor under his wing and introduced him to the world of public art creation and its importance to the community.

“We’ve done some really dope projects like working with the UNESCO World Heritage Sites of Emancipation Park in Galveston, Texas, we did the first June 19 mural which is about 50 feet by 120 feet and it was my first time getting on a boom doing things at this level,” Baylor explained. “I was like, this is for me because I wasn’t intimidated at all, it was natural and I led the team most of the time.”

Baylor decided it was time to bring what he had learned back home to Shreveport. His first project was the “Leaders of Tomorrow” which is located at 33 Marshall St. He collaborated with local artists who had also wanted to see change for a long time.

“Working with the Boys and Girls Club and putting the public into public art is something that, you know, I focus on and something that I learned in Houston,” Baylor said. “After that, I really started doing a lot of school projects working with a lot of kids and working with SCORE, the nonprofit.”

SCORE stands for Setting Children On the Road to Excellence and this non-profit organization has allowed Baylor to collaborate with many different schools to complete projects. Former Councilman LeVette Fuller noticed Baylor’s hard work and dedication and introduced him to public artist Ben Moss and the two collaborated on “Origin Court” which debuted in October 2021 at Valencia Park.

With the remaining funds from “Origin Court”, Baylor and his team presented the painting of the underpass to the Public Art Approvals Committee which greenlighted their vision.

“When it comes to the underpass, I opened up to what needs to be communicated. I had used the butterfly as a symbol of transformation through multiple projects I’ve done in schools, on basketball courts, through the underpass. It’s been the butterfly for me because of the metamorphosis; symbolizing that the city needs constant growth and higher and higher realization.”

“Ascension Underpass” will debut Thursday, August 4 at 5:30 p.m. under the I-20 overpass on Marshall St. in Shreveport.

Meredith G. White is an arts and culture reporter for the Shreveport Times. You can find her on Facebook as Meredith G. White, on Instagram and Twitter as @meredithgwhite, and email her at [email protected]