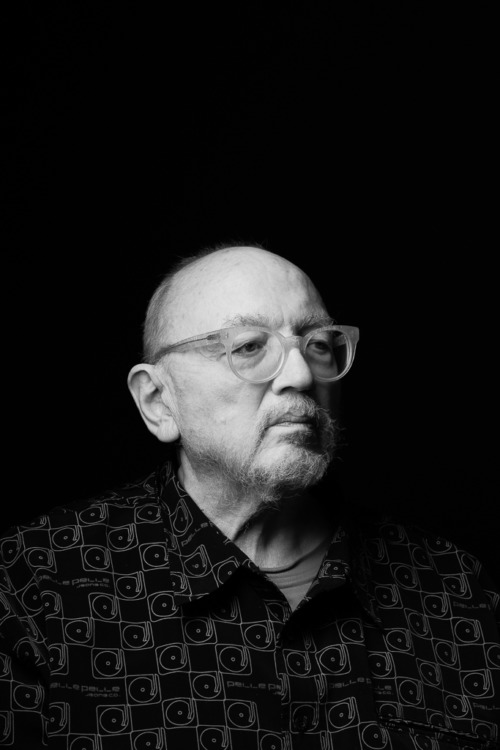 Gregory Grenon, a leading figure in contemporary art circles in Portland for nearly 40 years, died on February 6, 2022 at the age of 73. He and his wife, artist Mary Josephson, had just returned from a month-long stay in Italy.

Grenon was a Midwesterner who established himself after moving to the Pacific Northwest, making his mark in Portland and nationally with roughly hewn oil-on-glass paintings deeply saturated with color that suggest both the vigor of folk art and the psychological portrait. They are mostly paintings of women, often quite large, and usually painted on the back of glass, a process that can give them a sort of elusive sheen. They are part of numerous public and private collections and can be seen in prominent public spaces around Portland, including the Keller Auditorium.

Grenon has been represented in Portland since 1995 by Russo Lee Gallery and its predecessor, Laura Russo Gallery. “Gregory grew up in Detroit, Michigan, where he studied at the Center for Creative Studies and began making art in Detroit’s Cass Corridor, a thriving art center in the 1960s and 1970s,” said the gallery in a press release announcing his death. “After a stint in Chicago, where he honed his printmaking skills at Landfall Press, he moved to the Pacific Northwest in the late 1970s.”

It is difficult to overstate the impact of Grenon’s paintings on Portland’s cultural scene in the late 20th and early 21st centuries. His work was known and immediately recognized not only in the visual arts circle, but also by a wide range of citizens of the city. There was something about them that was immediate and subliminal, simple and complex, endearing and disturbing. Like comic artist Roz Chast’s simpler designs, they were both messy and inspired, not so much about ideals, which they used to subtly deflate, but about real people in situations. real, with real hopes and fears and dark experiences. they face in their daily lives. Cartoonish? Only on the surface: bold lines that don’t quite conceal the emotional turmoil beneath. And, more often than not, something more than that: a challenge, a stare into the viewer’s gaze, a desire to be taken seriously and win. Painting after painting, these figures convey strength and character – not as “models”, but as people, shaken but carrying on.

To carry on, to know how and when to do so, seemed crucial in Grenon’s approach to life and art. “This is it, viewers,” Grenon wrote in his artist statement for an online exhibition in April and May 2020. “What I have here is an important outlet for the resolution of inner tensions. I encourage young painters and those who have not painted, to work privately; to work from home until their individual styles have outgrown any premature influence. Reflect and ask yourself how much you could improve on the odd little drawings you you’ve been doing for years if you had paint and brushes.

In a 2016 ArtsWatch review, longtime arts writer Paul Sutinen noted that Grenon’s painted frames are not only decorative, but are crucial integrated aspects of his paintings. And, taking a long-term view, he noticed how Grenon’s art had remained the same and changed over the years: whether bright or greyed out. Traveling down a cheek or under an eyebrow in any of these faces, you can find the most startling color juxtapositions. There are oceans of subtlety within the borders of these faces. The face is the constant and everything else changes. It is still there. I don’t think he’s stuck in his pattern, but uses it the way Morandi explored the simple still life or Rothko explored the color possibilities and nuanced edges of floating rectangles for decades.

Indeed, throughout his life and career, Grenon paid particular attention to the vital link between action and reflection, each necessary to advance his art. Photographer and writer KB Dixon, while working on Face to face, his 2015 book of portraits of 32 prominent Oregon artists, took a series of photos of Grenon in the artist’s studio. “It’s the artist at work who assesses the progress of a new piece,” Dixon said a few days ago of the photo below. “I’ve always loved it – it captured an important moment, a moment of creative contemplation.”

And in a way, that feels like a fitting farewell. Grenon is survived by his wife of 33 years, Josephson, and stepdaughter Aurora Josephson.

Bob Hicks has been covering arts and culture in the Pacific Northwest since 1978, including 25 years at The Oregonian. Among his art books are Kazuyuki Ohtsu; James B. Thompson: Fragments in Time; and Beth Van Hoesen: Fauna and Flora. His work has appeared in American Theatre, Biblio, Professional Artist, Northwest Passage, Art Scatter, and elsewhere. He also writes the daily art history series “Today I Am”.

More stories by this author

Hartshorn Portraiture: a go-to studio in Hoboken for maternity and family photography for decades