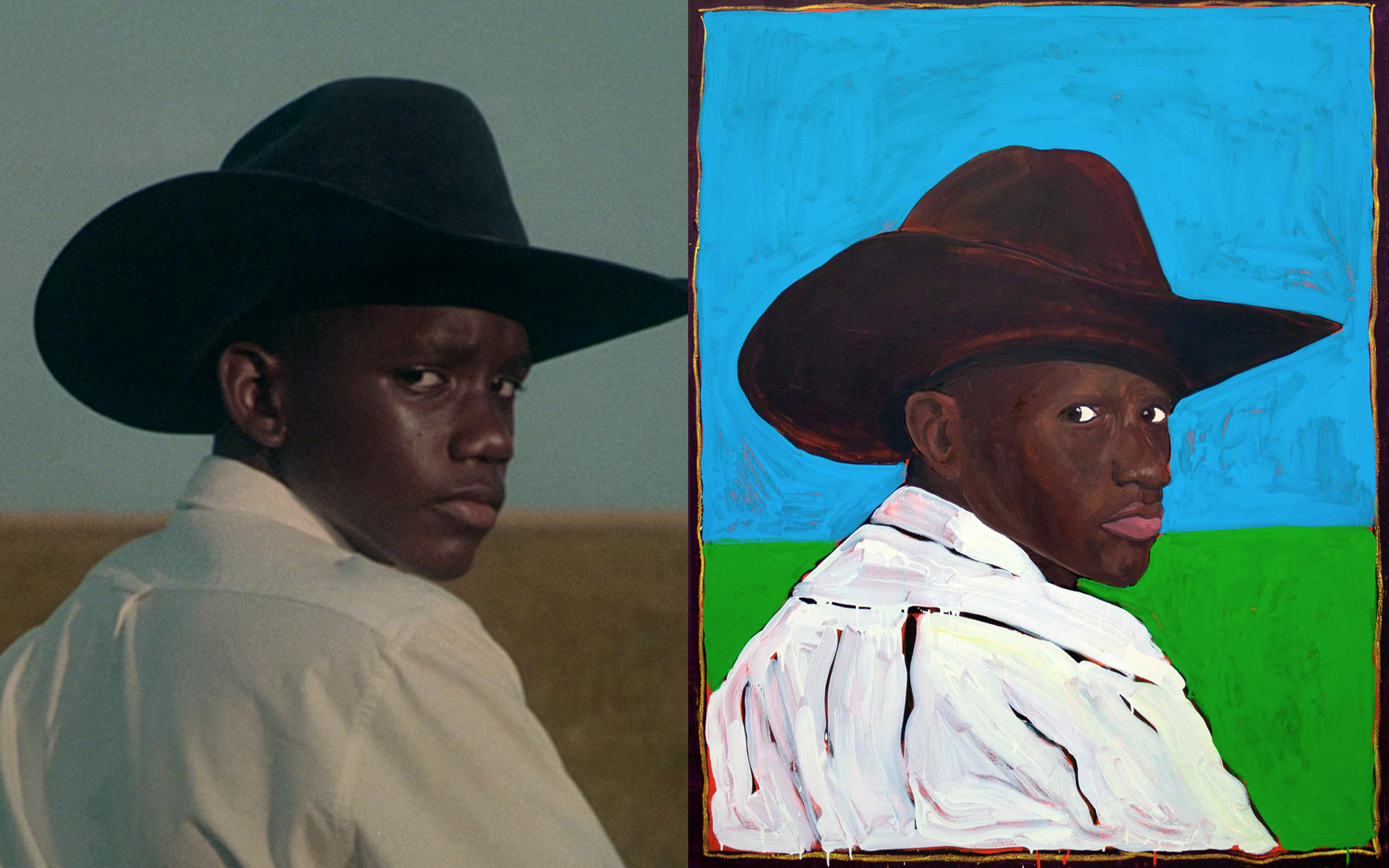 A painting currently on display at the Guggenheim Museum in Bilbao depicts a black figure wearing a cowboy hat looking over his shoulder against an abstract field and sky background. The austere composition, painted by Basque artist Gala Knörr, is nearly identical to an image captured by the Brooklyn-based photographer and filmmaker known as dayday – an image taken from her 2022 short film Blue.

The daytime film, shot in North Carolina, is a portrayal of Ezekiel Mitchell, one of the world’s top professional bull riders. Through visually stunning images and personal testimonies of Mitchell, nicknamed “Blue”, the film chronicles his early days in the rodeo and his plans to become the first black rider to win a world title in nearly four decades. The film’s hazy light and soft palette, deftly capturing the sharpness of a white shirt and the red dirt of the rodeo ground, are very different from the vivid hues of Knörr’s work, but the resemblances are otherwise uncanny.

The similarities were noted by social media users, who decried that Knörr’s painting “Young Cowboy” (2022) and other canvases by the artist in the Guggenheim Museum Basque Artists Program the show made no reference to dayday in their titles or promotional materials. Criticism was further amplified on TikTok, where videos from art consultant and curator Alexis Hyde and user Bona Bones called Knörr’s paintings “blatant rip-offs” from day labor, a self-proclaimed black and queer artist. Dayday’s credentials are impressive, including work for an ABC series on the show. The soul of a nationa design concept for the New York Timesand Alicia Keys branding Master class series.

A text on the Guggenheim website describes “Young Cowboy” as Knörr’s attempt to revise the archetypal narrative of the American West by pointing to its roots in “colonialism and in a mixture of races, cultures and backgrounds”. According to the text, which mentions neither the day nor Bluethe painting was “inspired by the image of young African American Brianna Noble on horseback,” a photograph from a Black Lives Matter protest in Oakland that went viral in 2020.

Knörr’s painting echoes Dayday’s film subject, not just its form. In a scene from Blue, University of Houston professor Dr. Demetrius W. Pearson laments how rodeo culture has failed to recognize black people. “It is unfortunate that the legacy of African-American cowboys and their contributions have been not only glaringly omitted, but often whitewashed, from the annals of American history,” he says.

A spokesperson for the Guggenheim Bilbao told Hyperallergic that a resolution had been reached: Dayday, Knörr and the curators of the exhibition agreed to exhibit the work along with a statement from the artist “marking the source visible inspiration from Knörr”.

“By concretely linking the works together, we can initiate a reflection on the double erasure of the cowboys of the Basque Country and the African-American cowboys of the United States from history,” said the spokesperson. Dayday and Knörr did not respond to Hyperallergic’s requests for comment.

“We believe in giving credit where credit is due and want to encourage a collaborative space of all abilities,” the gallery said. “As for Gala, we want to acknowledge the pathways by which she got to where she is and urge cultural institutions such as galleries and museums and the artists themselves to reflect on their practices and the impact they have. and to notice how their privileges have brought them to where they are.”

In an August 2021 Instagram post, the gallery located Knörr’s work at the intersection of “identities and technology,” highlighting his use of media, popular culture, and digital imagery in sometimes tongue-in-cheek ways. Indeed, other works by the artist demonstrate his interest in found material, such as a celebrity photograph, not unlike well-known artists like Richard Prince. But the recent controversy exposes the limits of appropriation in art, highlighting how the strategy dear to postmodernists can lead to the obfuscation of artists from historically underrepresented groups.

“Gala Knörr’s blatant plagiarism does not license or provide a platform for these artists or their stories – especially if it is so difficult to give proper credit to the original artist,” Polanzke said. to Hyperallergic.

Polanzke added, “If institutions like the Guggenheim really love how evocative his work is, why not exhibit the original artist or one of the many black figurative artists making a name for themselves in the art world? “

'Danger!' finally welcomes the public of the studios again!