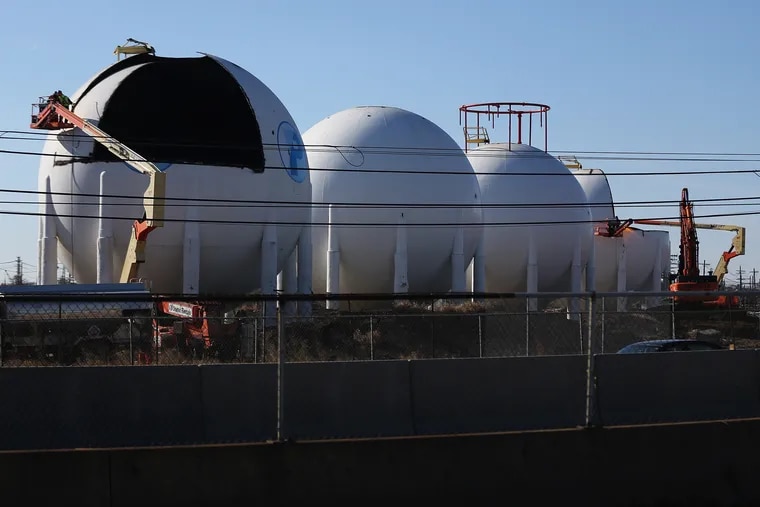 Three years ago, the Philadelphia Energy Solutions refinery exploded, shaking our homes, releasing terrible smells and scaring residents – even those of us who had lived through generations of fires and explosions in the greater and the oldest refinery on the East Coast.

The June 21, 2019, explosion sent a 38,000-pound piece of metal flying nearly half a mile, released 5,239 pounds of hydrofluoric acid into the atmosphere and sparked lingering concerns about carbon emissions. benzene that persist to this day.

Although the refinery has been closed since 2019, pollution of the site continues. Last month, data from monitors near the site was made public and residents learned that average releases of benzene – a pollutant that causes leukaemia, cancer and birth defects – were twice the action level federal and the second highest in the United States. in 2021.

Refining fossil fuels is dangerous – they give off carcinogenic pollution and are highly volatile and combustible. What has made matters worse since the plant’s closure is the lack of public involvement in planning the demolition and redevelopment of the refinery site. With more opportunities for public comment, residents would have shared our concerns and protections against benzene pollution could have been in place since demolition began in 2020.

» READ MORE: South Philly residents ask for their contribution to the redevelopment of the refinery site

Unfortunately, as the redevelopment of the site progresses, it seems to us to be the same old lack of transparency that we experienced from the refinery, with an added layer of greenwashing. For the past two years, the site’s current owner, Hilco Redevelopment Partners, has hosted Zoom meetings where we can’t see other residents or read questions our neighbors submit. We tried to attend the June 14 Hilco meeting at Audenried High School, but when we approached we were told it was cancelled.

Residents are ready for a different path – we still hope that the former refinery site, now known as the Bellwether District, will deliver on the promises made by Hilco in its public relations campaigns, including sustainability for the community and a carbon-free future. It’s not too late to involve a broad base of affected residents in planning for demolition, cleanup and future land use.

The United South/Southwest Coalition for Healthy Communities, a collection of 22 organizations based in the neighborhoods surrounding the refinery site, held the first in-person public meeting about the redevelopment project earlier this month. Hundreds of Philadelphians joined us for the meeting, where coalition members shared updates on the redevelopment, allowed residents of all ages to share their priorities, and held an open discourse. The coalition assured that the event was accessible to frontline residents, hosting it at a local park for COVID-19 safety, providing food and seating for our seniors, coordinating rides, and offering a Zoom option. We modeled how to run an informative and engaging public meeting that leaves room for resident feedback.

We continue to call on Hilco to make a formal commitment to negotiate a Community Benefits Agreement with the coalition, engage residents in planning for future land use, and follow through on promises of carbon-free development. We also call on our elected officials to insist that businesses deliver on their promises and meaningfully involve residents in making decisions that affect our lives.

And let’s be clear: United South/Southwest members are not alone in identifying a lack of public process and accountability as root causes of the harm we face. Across the city, our neighbors are experiencing the same patterns: millionaires and billionaires profit while excluding us from decisions that affect our lives. But the inhabitants push back and organize for a fair and healthy future for Philadelphia – through a city budget that reflects residents’ priorities, halting sheriff’s sales of community space, and fighting the displacement of low-income tenants.

The Bellwether district is an opportunity for Hilco to model true “sustainable development for the community” by restore confidence and repair the legacy of 154 years of refinery damage. Philadelphians are ready for our city to move from a culture of extractive development to one where development is rooted in residents’ visions, protects community health, and advances justice.

We have been lifelong residents, mothers and grandmothers of Grays Ferry, and have seen our loved ones suffer and die of asthma, bone cancer, breast cancer, multiple myeloma, bronchitis and cancer. of the esophagus. Sadly, our story of loss and grief is common – pollution from the 1,300 acre site of the former refinery has affected our health, our homes and our families for generations. Enough is enough.

Philly Thrive members Jeanette Miller and Sylvia Bennett write behalf the United South/Southwest Coalition for Healthy Communities. The coalition is made up of nearly two dozen organizations based in the neighborhoods surrounding the former refinery site and is pursuing a community benefits agreement with Hilco Redevelopment Partners and accountability to nearby residents through every stage of redevelopment.