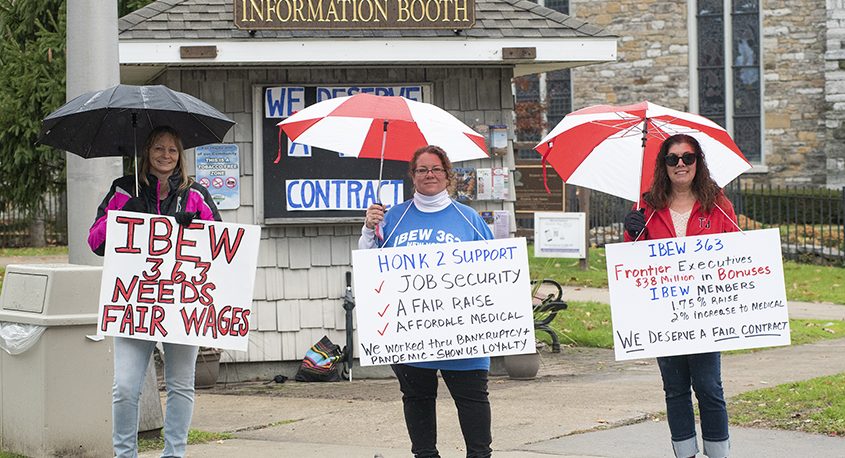 Carla Gagliano raised her fist in the air and smiled at the driver of the truck as they walked through the light at the intersection of West Main Street and North Market Street on Saturday morning.

Gagliano was one of five members of the FIOE 363 union employed by Frontier Communications standing at the intersection with placards protesting the company’s recent 10-hour contract offer.

“It’s disheartening to have to fight for the right things,” said the 22-year-old Frontier employee. “Companies should be looking for people who make them what they are. ”

The group decided to hold their protest at Sir William Johnson Park as there are two call centers not far from the park on South Williams Street and Harrison Street.

During this meeting, the company offered union members a three-year contract with no union medical coverage, no job security and an increase of 1.75% for the first two years and 2% for the third. . It also included an increase in medical costs for employees.

Gagliano had a sign around his neck that said “Support Honk 2”. This was followed by red check marks next to the three things union members want in their contract with the company: job security, a fair raise, and affordable medical coverage.

The sign ended with “We worked during the bankruptcy + the pandemic – show us your loyalty”.

Knapik said the previous contract, which ended in October 2020, did not offer affordable medical or job security coverage, but offered a 2% increase per year between when it was signed in 2016. and its end.

But things have changed with the company since the last contract, said Amy Beadle and Mickie Rickard, workers who drove to join the Norwich protest.

Their unit and one in Middletown are also part of IBEW 363.

Beadle and Rickard said union members remained loyal to the company when it underwent changes due to bankruptcy and due to the pandemic, which saw the closure of offices in the United States and more. of work distributed among the remaining employees.

When the US offices are closed, “this work still needs to be done,” Rickard said.

That means overtime and a lot, according to Beadle.

“They offer it almost daily,” she said.

In September, employees at the Johnstown office worked overtime every day. In October, some overtime days meant working until 9 p.m., Knapik said.

On top of that, the 350 union members don’t believe the pay they get for all the overtime is fair.

Knapik said unions in other states, such as California, were able to secure the stipulations requested by IBEW 363 in their contracts.

“It’s almost like the company is laughing at us,” Rickard said.

According to Beadle, she’s given the business a lot over the years, including giving up an hour a week about 12 years ago because the business was struggling with money at the time.

Rickard said it was just the little things here and there that the company did or took away that made union members unhappy.

For example, Rickard said the union called for Veterans Day to be a statutory holiday, something management employees receive, and the company said no, even though it prides itself on hiring veterans. .

She said union members might have an easier time giving up more modest benefits, like time off for Veterans Day, if the company assured them they would keep their jobs for years to come. future.

“Things like that are just hard pills to swallow when the company doesn’t give us reassurance,” she said.

Not all protesters could believe the company had gone this far.

“We implore this company for job security to work for them,” Beadle said.

Knapik said they have three chances to vote on a contract and if that does not happen, mediation could be called to resolve the issue. However, Gagliano said 96% of union members have already voted in favor of strike action if the contract issue is not resolved.

Kathy Howell, vice-president of the union and one of its negotiators, was also present at the demonstration. She said she couldn’t talk about the position of the talks because she had to stay neutral.

The next contract meeting is scheduled for December 11.

More from The Daily Gazette: