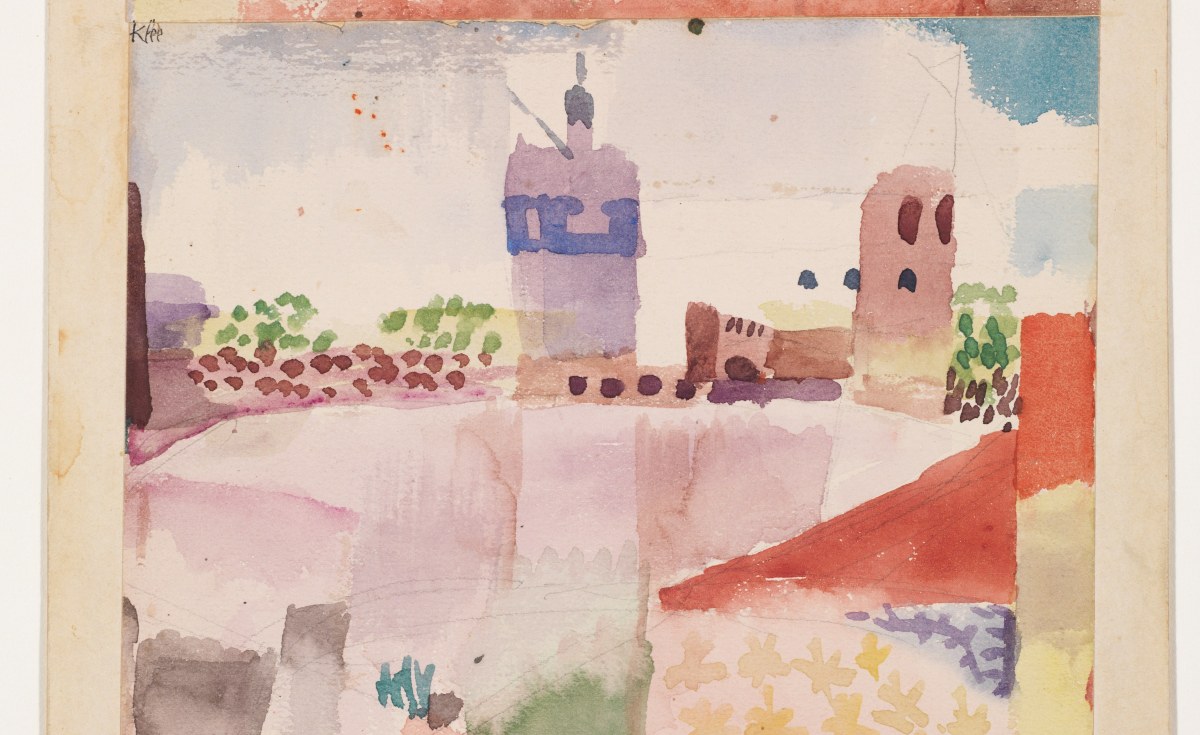 In this new series, our writers introduce us to a favorite painting.

For almost as long as I can remember, I have loved the paintings of Paul Klee (1879-1940). When I was growing up, my parents had a strange little lithograph of him called Phantom Perspective. It shows a wafer-thin man asleep in a dormitory of incoming straights.

As one of the curious fish in Klee’s childish visual aquariums, I was hooked.

It was during his famous trip to Tunisia in April 1914 that Klee painted Hammamet with its mosque, now owned by the Metropolitan Museum of Art in New York.

Traveling the east coast of the Maghreb nation with two artist friends, August Macke and Louis Moilliet, the trio used lightweight watercolor kits and sketch pads to record their impressions.

Tunis, Saint-Germain, Hammamet and the holy city of Kairouan became the sites of their collaborative visual enterprise.

Klee was recently in Paris to visit Robert Delaunay, the artist who converted Picasso and Braque’s austere version of Cubism into a lyrical play of colorful squares and triangles.

Klee adapted this language in all his Tunisian works, and it was in Kairouan, in a café at the end of a day painting the city’s domes, that he declared in a moment of ecstasy:

Color and I are one. I am a painter!

Hammamet with its mosque, as solid in its composition of diagonals inside squares as its substance is evanescent, proves him right.

“The city is beautiful”

Hammamet was a small fishing port – the Hadrumetum of Carthaginian times – whose fortified medina and inner fortress or Casbah still exist today. I spent three days there in 2014 on an aesthetic pilgrimage.

I was armed with maps from the Baedeker guide that the German-speaking trio had used, postcards of the city dating from 1905 and the delicious journals in which Klee wrote:

The city is beautiful, right by the sea, full of sharp turns and angles.

The medieval mosque of Hammamet, with its square minaret, its crenellated gallery of the muezzin and its 45-degree mast, is depicted in Klee’s watercolor with surprising precision.

My eyes told me as much, just like the old postcards. But one building was missing: Klee’s right tower with its wine-coloured windows. Nothing in the now-cleaned Casbah matched him.

And why, I wondered, did the painter embellish the foreground with buff and pink triangles with star shapes and green stripes?

My general thesis, unlike scholars who saw Klee as an abstractionist who used free invention in the making of his colorful pictorial tapestries, was that Klee (and Macke) used “real” elements of the observed world to fuel their plastic inventions – clever combinations of the observed, the supposed and the superimposed.

Through careful examination of photographic evidence, I learned that from around 1910 until Tunisian independence in 1956, the Kasbah of Hammamet was topped by a two (and then three) storey blockhouse called the “optical post” .

Since 1881, Tunisia was a French protectorate. As war approached, the French army installed a flashing optical telegraph using towers with a clear line of sight along the coast.

The new optical post at Hammamet was photographed by a visiting French officer, a Lieutenant Klipfel, in 1910.

But this account of Klee’s image was incomplete because the minaret and optical post were more than 100 meters apart. Did Klee bring the two towers together artificially, using the creative license of a painter? This would hardly be abnormal, landscape painters having done the same since Claude Lorrain in the 17th century.

A fortuitous discovery at the Albert Kahn museum, in the Paris region, provided the explanation.

Albert Kahn was a wealthy French philanthropist who, from 1909 to 1931, sent photographers to 50 countries around the world to form the “Archives of the Planet”, using the new technologies of color photography and film.

Kahn’s most prolific operator was Frédéric Gadmer, who on April 26, 1931 visited Hammamet and took three color photographs – two of the beach and the other beyond the crumbling walls of the medina. This last view brought together the minaret in the center and the optical post well behind.

In the foreground, a flowery ground cover and a few low tombstones: the beginning of the sandy marine cemetery of Hammamet which still exists today.

Painter and photographer had found the same motif – the floral and the old with a modern twist – in their walks around Hammamet.

This excerpt from art history research convinced Michael Baumgartner, former curator of the Paul Klee Foundation, that Klee was more concerned than we knew with the architectural substance of this culture he so admired.

Indeed, from this perfectly balanced and whimsical sketch – which he cut out at home, gluing the lower red stripe to the top and providing a handwritten title and date – Klee pulled a series of three further compositions more grandiose.

Together, they constitute one of the great moments of pre-war avant-garde painting.

As a child, I admired Klee, who was himself one of the first modern artists to admire children’s art. The apparent simplicity of Hammamet with its mosque, this small painting of monumental impact, belies a complex history of intercultural encounter.

My pilgrimage to Paul Klee's Hammamet site with its mosque