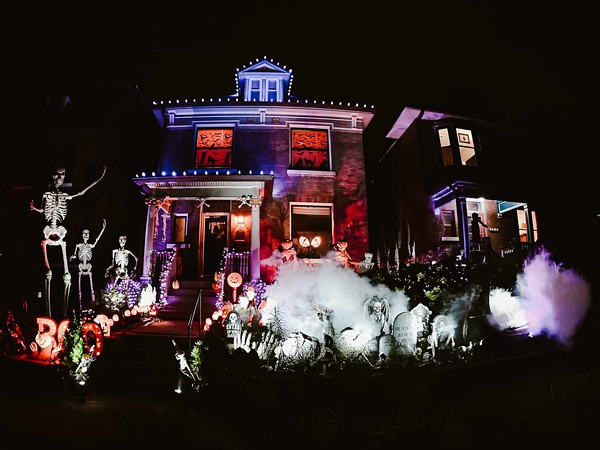 Metra Mitchell stares out the window next to her front door, a wide evil smile on her face. She grabs a handful of remotes, selects one, and happily presses a button.

Outside, animatronic skeletons activate and release smoke. A trio of onlookers – two children and a parent – jump and then get excited at the wild spectacle that has come to life.

The group stumbled upon one of the most exuberant Halloween houses in St. Louis. Mitchell, an artist whose paintings and prints explore what she calls “Halloween magic” year-round, transforms her Tower Grove home and yard into a breathtaking installation every year.

Part of his reward comes from observing the reactions of passers-by. She is happy to embody the artist as a voyeur. 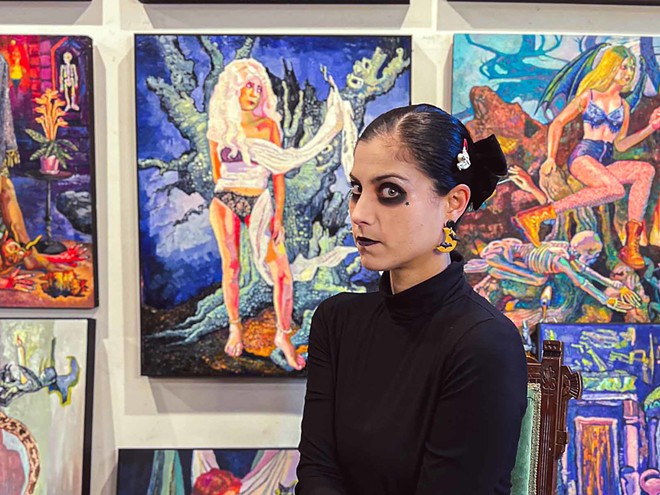 Metra Mitchell has a studio behind her house which she named “The Witches Hut”.

As you approach Mitchell’s house, you first see the lights – purple ones running along the front railings, pumpkin lights along the driveway, and white floodlights everywhere. On the left side of the house stand a trio of skeletons arranged in order of height, from a highly sought-after 9-foot Home Depot giant to two closer to human proportions. There’s a graveyard with skeletal hands sticking out of the ground. The large letters spell “BOO”. The windows are adorned with silhouettes of bats and black cats.

Mitchell begins releasing the exhibit in September, but is constantly on the lookout for new additions. This year, she scored a limited-edition glowing cauldron on Facebook Marketplace, dying a thousand deaths as the transaction dragged on for two weeks while the seller searched for the adapter.

“I was like, ‘I can’t tell her. I can’t tell her what she has,’” Mitchell says. “…I’m like, ‘Ma’am, I’m going to buy a fucking adapter. ‘” Mitchell is in her element as Halloween approaches. Every night at 6 p.m., the battery-powered lights and animatronics come on. a few trips so as not to be afraid.

“It’s like pure adrenaline,” she says. “You prepare all year for basically the show of all shows.” 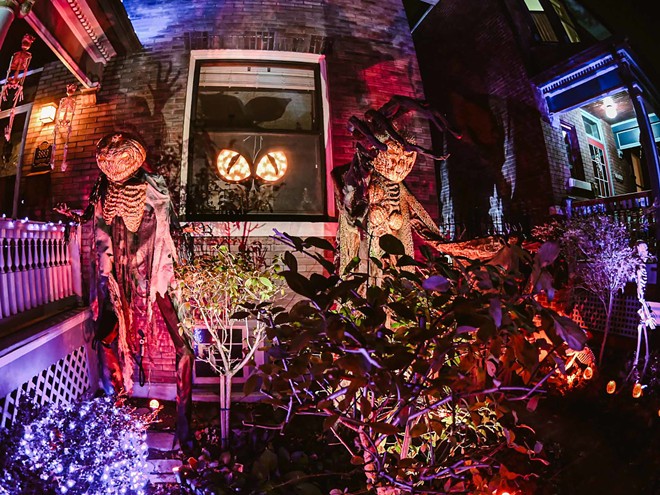 A pair of pumpkin-headed scarecrows stand outside Metra Mitchell’s house.

But Mitchell’s passion for Halloween goes beyond the day itself. “On Halloween, it’s kind of like you can be anything you want to be,” she says. “With Halloween night – or I mean for Halloween people – we try to live this life which is always magical. To be a practitioner of magic, there is a magic trick, but it can also be very real.

Mitchell got into Halloween through her art, which she started young while growing up in rural Kentucky.

Her father was a “hotheaded asshole”, she says, and her mother, an Iranian immigrant, was the breadwinner but often absent. Left to her own devices, Mitchell played with Barbies, drawing on the wall and painting on the carpet with her mother’s nail polish.

“When my mum found out, my dad beat me up,” she says, saying he broke several bones, stabbed her with a pair of scissors and once bit her in the face. “I’ve literally been punished for my art since I was a kid, and I don’t know how I ever got on with it.”

Mitchell needed to get out, so she focused on securing an art scholarship, landing one at Louisville’s Governor’s School for the Arts for undergrad and then Fontbonne University for college. higher education, that’s how she ended up in Saint-Louis.

Mitchell now works in a studio — “the witch’s hut” — behind her house. Through her works, she channels the strength and vulnerability of her past. His paintings and prints depict women, witches, demons, goblins, and other denizens of fantasy. They are often posed, sometimes writhing, in a way that evokes classic art with a twist of horror.

Over the years, her themes have been consistent, as she demonstrates with pages from an old sketchbook. However, his style and technique have evolved considerably since those early days. Even since last year, his paintings have changed and have a more developed texture, what Mitchell calls his “blobs.” 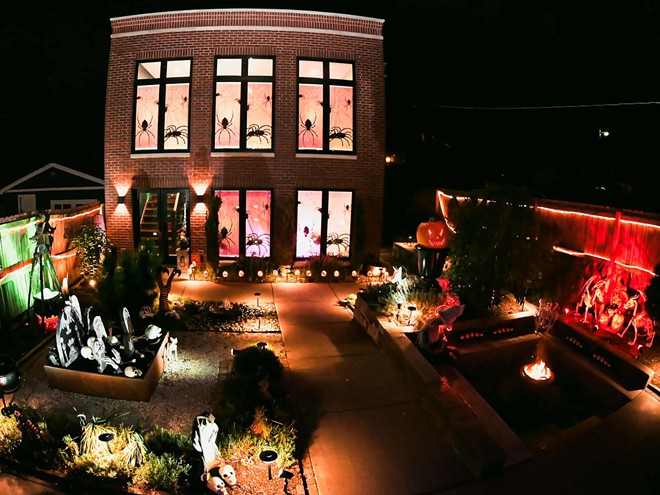 Metra Mitchell’s works explore the magic of Halloween throughout the year.

Each painting begins with a model and sometimes a posed photograph. Then she makes sketches, sometimes makes a print, and sketches the composition on a canvas.

Once the prep work is done, the painting itself goes fast. Towards the end, Mitchell finds herself disappearing into what she called “the shadowlands”, this state of concentration where the outside world retreats. She recalls a recent instance where she was so passionate about painting that she climbed onto the table next to her canvas without consciously realizing it, wondering how she had gotten there.

“It actually scared me a little bit,” Mitchell says.

Mitchell’s art has huge fans – she is represented in galleries across the country and is able to make painting her full-time job, although she also teaches at several area universities.

There are, of course, times when people’s reactions aren’t so good: from parents who worry that her work isn’t appropriate for their children, to men who are rude. But over time, Mitchell learned to handle everything his own way.

Visit Metra Mitchell’s Halloween home on the 4800 block of Hartford Street in Tower Grove Heights on October 31. More details on holidaylighthopping.com. His works are available for purchase at the Houska Gallery and the Soulard Art Gallery in Saint-Louis; Sager Reeves Gallery in Columbia, Missoui; and the La Luz de Jesus gallery in Los Angeles. Check out his website metramitchell.com for more information.

Email the author at [email protected]