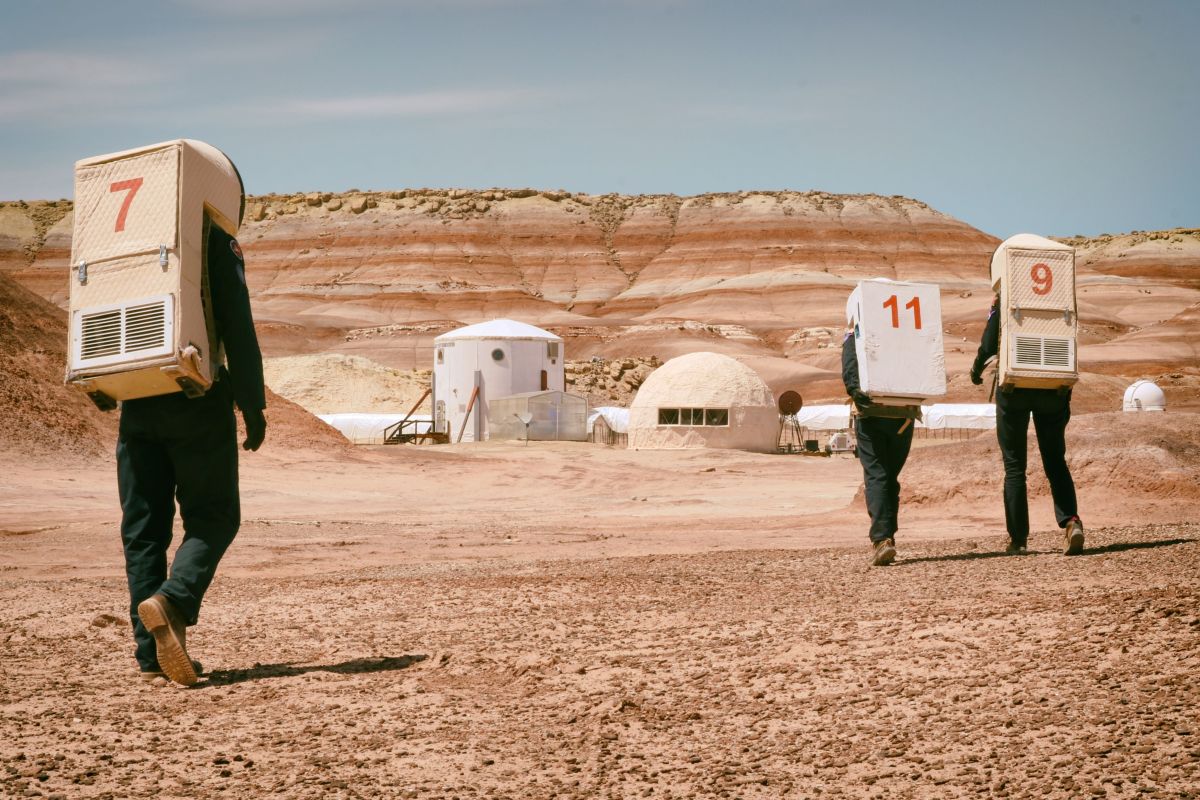 Dr. Shannon Rupert is an environmentalist and educator who has spent over 20 years researching analogues of Mars. She is the longtime director of the Mars Desert Research Station (MDRS), owned and operated by The Mars Society. MDRS welcomes researchers who carry out their work in simulation, living as if they were on Mars. For more details on the MDRS program, please visit: mdrs.marssociety.org. Rupert contributed this article to Space.com’s Expert Voices: Op-Ed & Insights.

It’s the start of spring in the southern Utah desert. After a year-long halt in operations due to COVID, I’m back at the Mars Society Mars Desert Research Station (MDRS), where I’m a director, preparing to welcome two US-based teams to the facility. After a particularly difficult day working on repairs to the water system, I woke up at night to my dogs barking. I look out of the small window in my bedroom, which is separated from the station by two hills, and I can see what appears to be a bright light shining on one of the buildings. While I struggle to understand my dogs calm down, so I fell back to sleep, thinking I hadn’t noticed the moon was full.

Months later, our public relations manager receives an email. Attached is a photo of MDRS, all lit up, with the night sky emblazoned above. In the email, the photographer gives details of his long time exposures and how he illuminated the station on the night I just described, and spent hours photographing the night sky. He takes pride in his work and doesn’t think of sharing how he entered private land, photographed an entire field station without permission, and stayed put while I slept a few feet away oblivious to this violation. It still bothers me to think about it. Imagine if someone did this in your own backyard.

Fortunately, no crew was in residence at MDRS that night. Visiting teams expect to see a person or two when in the field, or someone viewing the station from the road in the distance. But the isolation and suspension of disbelief regarding the simulations of our crews are major elements of analog research related to space. Future astronauts on the Red Planet will experience a level of isolation that no human has ever experienced, and much of MDRS research, led by its crews, focuses on this challenge.

Do that Mars simulation as realistic as possible is the key to this research. Crews can accomplish this, but not with constant outside interference. What hampers this effort are the drones filming crew members from outside their windows, or people wandering the facility, sticking their heads around buildings, or sitting on the hill just outside. airlock before dawn. These are all things that have happened over the past few months at our southern Utah station. With growing interest in space and information overload on the internet, visitors are much more frequent at MDRS than in the past.

I like welcoming occasional guests, giving them a glimpse of the resort when the teams are away. One of the best parts of this job is seeing someone’s eye light up at the possibility that humans are actually going to the planet Mars. Everything changed with COVID. Many people fled the reality of the pandemic in their daily lives by escaping to the American Southwest, where they were able to practice social distancing by exploring the outdoors. There has been an increase in the number of websites and social media sharing places to visit.

Unfortunately MDRS has become one of those tourist sites, and on the internet and in nearby Hanksville people are saying that we are open to the public and / or the station is accessible to everyone. This is not true. Since returning to the station earlier this year, I’ve spent more time chasing people off the property than welcoming them. Some are confused, some are polite but disappointed, others were threatening enough that the local police were called, but all felt they had a right to be here.

Related: What would it be like to live on Mars?

Our staff did what they could. We posted signs defining our lease, informing people that under Utah state law the MDRS is located on private property and drones are prohibited. We have signs restricting access to the area. We contacted every website we could find that had misinformation about us, and I have had meetings with local business leaders and managers about this growing problem. Does it work? Not all the time, but it’s better.

Social media is a huge challenge as disinformation spreads like wildfire. People post a photo and everyone wants to go out and take the same photo for themselves. For a while we had people walking in and around MDRS every day. It turned out that someone had posted a photo on social media with the MDRS contact details. Lately every time I go north of the facility I see people on a certain hill. I guess this area is the new darling of social media. This is a relief, as fewer people in the area means less disruption to the important work we are doing here, which will help meet the Mars Society’s goal of putting boots on the red planet.