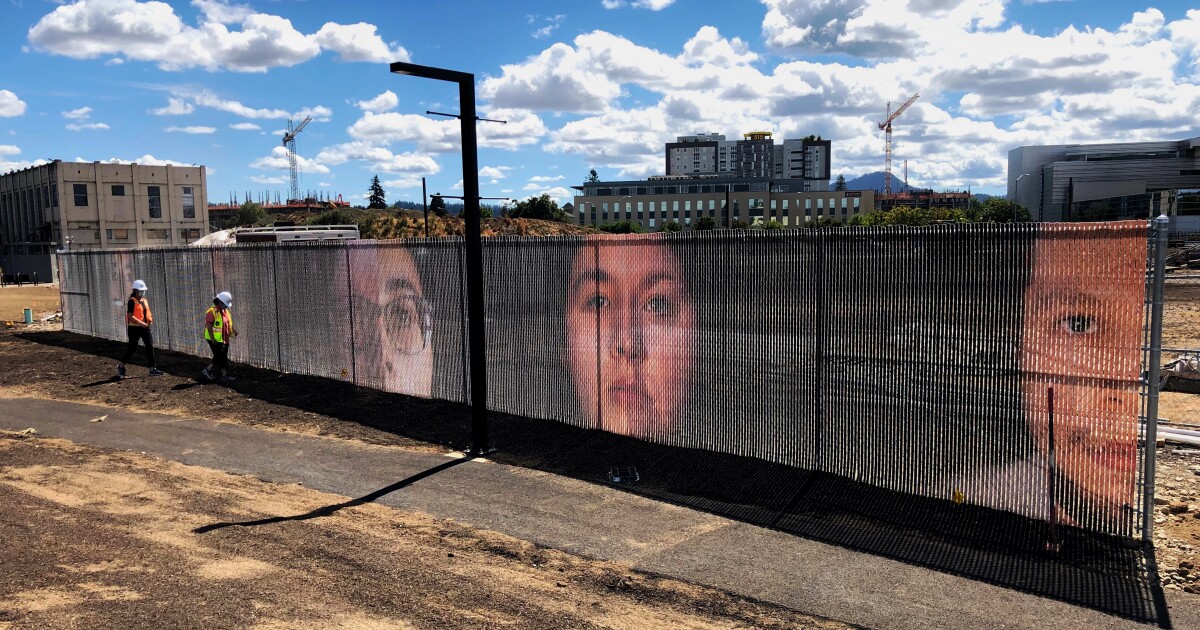 If you walk around the new development of Downtown Riverfront Park in Eugene, you might just gaze at works of art… which, in turn, are staring at you. Brian Bull from KLCC talks about the ‘Culture Raising’ installation and how it recognizes the indigenous peoples of the area.

Flashback to a sunny August afternoon last year – I’m on a stretch of walk between the old EWEB headquarters and the old steam power station. Charly Swing, director of Art City, pointed out what at first glance looks like an ordinary, 100-foot fence. long, 8 feet. up, and… with individual faces.

“Actually, two faces,” Swing explained. “Each is a youth and an elder, Native American and Indigenous, who live in our community.”

Photos of local Indigenous people were taken via a Zoom teleconference and following COVID protocols. The images were then transferred to coroplast sheets. These images were then cut into slats which form the fences.

“We chose to install it here on the downtown waterfront park and it forms this beautiful imagery between the park and the future private development,” said Emily Proudfoot, senior landscape architect for the parks planning section of the City of Eugene from the Public Works Department.

“But what I like is that it looks towards the river.”

A growing awareness of the earth’s original inhabitants, the Kalapuya, has helped Oregonians connect the past with the present. Tennepah Brainard, who goes by the name “TJ”, is the concept artist behind the Culture Raising project. She is of Coos/Apache descent and a student at the Institute of American Indian Art in Santa Fe. Due to the pandemic, she remained in Eugene where she coordinated subject photography.

“And so I thought okay, let’s do like half a face and eyes, but after a while I realized that for me, it’s kind of like doing Native Americans like people,” laughed TJ “Not like full headgear and insignia, just… see we’re here, and this is us, and how very different we are and how similar we are to everyone else.

TJ used the faces of his relatives and guardians, pairing the half-face of a youth with that of an elder. The result is a series of intimate portraits that shed light on the presence of Aboriginal peoples, historically and today.

“It just felt right that they were the first to be brought up on that fence, as a culture that we come together to give recognition,” Swing said.

During this time, Gregory Stanley Black was involved in documenting the installation process. The project was made possible with funding from the City of Eugene Urban Renewal Agency, with additional support from Cultural Services and Parks and Open Spaces.

Back at the Riverfront development, Emily Proudfoot told me there was an immediate connection felt looking at the faces of the local indigenous people.

“I feel like they’re there, watching us and taking care of us or something. It’s really…it’s an important and very emotional piece, I love it.

The Culture Raising installation is the result of an open call for Lane County artists in 2020. Although the fence art exhibit is temporary, the slats will be removed and woven into a new form, which will be put auction to help support new works of public art. created by Native Americans through Eugene.

The new Riverfront development opens to the public Friday at 10 a.m.

Kyle Tucker expected to be Astros' next big contract extension