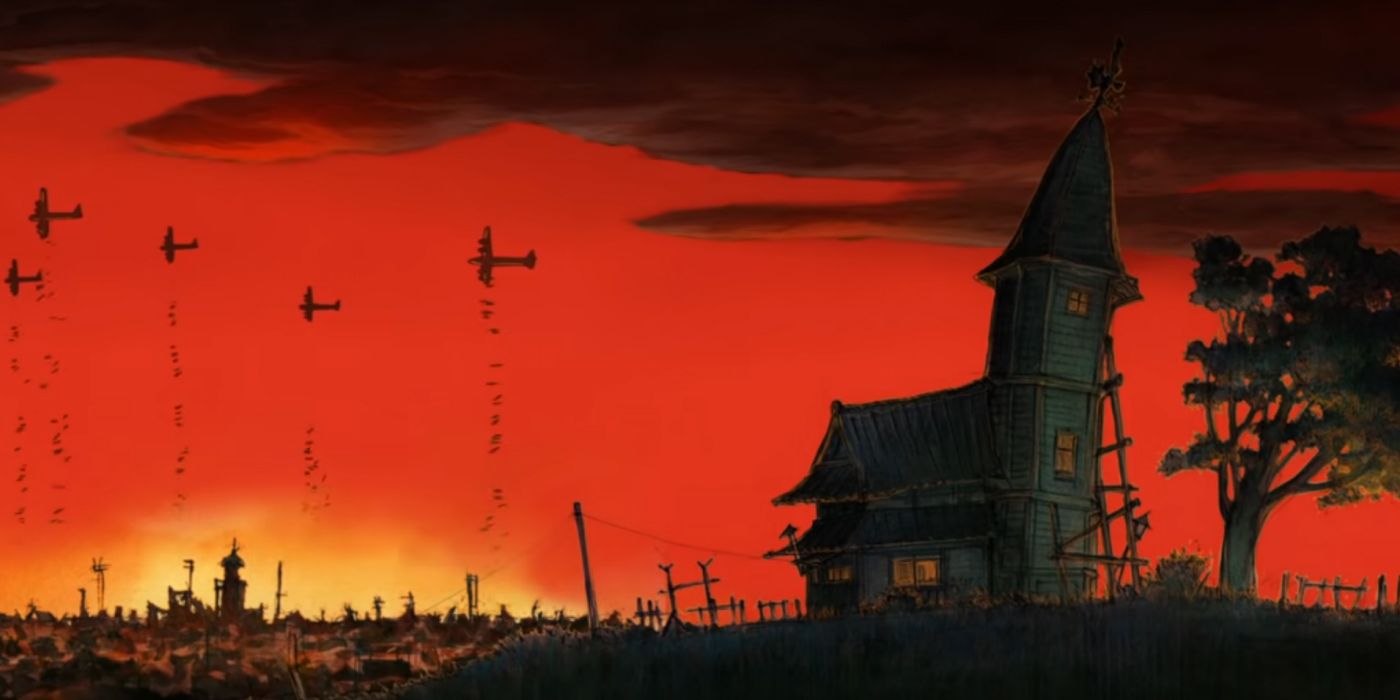 The portrait studio (Shashinkan) is an animated short film directed by Takashi Nakamura and released in 2013. The story follows the life of a portrait photographer and his relationship with three generations of a family living in Tokyo during the 19th and 20th centuries. With each photo taken, the environment, clothing and characters change to reflect the era in which they live. The short focuses largely on the exchanges between the owner and a young girl, who struggles to smile for her photo. With each passing year, the artist does everything in her power to make her happy, but fails again and again.

Without narration or dialogue, The portrait studio instead relies on its expressive animation style and fantastical score, composed by Jun Ichikawa (Pokémon: Diamond and Pearl), to convey the emotions of the characters throughout their journey. Despite being 16 minutes long, the short does a great job of building out its world, its characters, and the viewer’s connection with them. By the end of the film, viewers will likely have tears in their eyes and come away with an important message about how to live a fulfilling life.

RELATED: How Many Ash Pokemon Were Caught With Battle Skills In Season 1

The plot of Portrait Studio

The portrait studio opens with a newly married couple climbing the steps of the artist’s studio which rests on a hill overlooking the city. The serviceman’s wife sits down to have her picture taken, but she’s so shy she has a hard time looking up at the camera and smiling. Despite the owner’s best efforts, she remains sullen and unwilling to participate. In a moment of realization, the portrait painter gets up to pick a bouquet of flowers for the woman to hold. Finally, she looks up and smiles at him so he can take the picture.

Years later, the same couple returns to the photographer’s shop, only this time they have brought their newly born child. As the mother quickly looks up and smiles, her baby girl is much less willing to cooperate. This behavior persists throughout her childhood and it seems the owner can’t do much to make her smile. Whether it’s making faces, ferociously spinning puppets, whistling or dancing, she continues to frown. Eventually, the photographer can do nothing but take her picture and allow the family to walk away with a souvenir of their grumpy daughter.

RELATED: Boogiepop Phantom: Madhouse’s Forgotten Classic Is the Perfect Way to Kick Off a Spooky Season

Time passes and the girl has become a woman. Regardless of her newfound maturity, she is still unable to smile for the camera and continues to go through life with an air of sadness. The now middle-aged photographer witnesses several disasters ranging from an earthquake that destroys much of the surrounding region to war bombings that wreak havoc in his local community. The resulting chaos leads to both the woman’s father and teenage son perishing, leaving her in an even greater state of misery.

In modern times, women have remained fatherless, widowed and without heirs. The only person who remains a constant in her life is the photographer, whom she takes care of in her old age. She remains as solemn in her last days as she was in her youth; however, after finding a series of photos that have been taken over the years, she is finally able to reflect on all the positive things that have happened in her life. After the owner of the portrait studio asks her to sit together for a photo, she is finally able to smile.

Portrait studio themes and a crucial message about life

The portrait studio examines ideas surrounding time, memory, human connection and happiness. Although these are singular moments, the images taken by the photographer act as important reminders of the events that took place in the life of the family. Whether it is marriage, birth, personal accomplishments or even death, the artist remains a stable figure. The photographs he takes are able to capture impermanent slices of time and allow the viewer to remember the people, places and even times they once inhabited.

While portrait photography generally aims to promote the happy moments in a person’s life, the artist instead finds himself photographing a girl unable to smile. This juxtaposition reflects the difficult situation of Japan during this period. From the Great Kantō Earthquake in 1923 to the devastation of Tokyo in the 1940s by American bombing, the woman’s sadness, which manifests itself even shortly after her birth, foreshadows the difficult life she will have to lead.

RELATED: The Real Difference Between A Kuudere And Dandere Character In The Anime

The camera acts as a symbol of the constant change that took place in the world between the Meiji and Shōwa periods. The photographer not only takes pictures of people through the different stages of their lives, but also how their clothes, customs and environment change alongside them. From a relatively small city built of wood, Tokyo is transforming into a towering cityscape made of metal and concrete. The serene, nature-filled landscapes that once surrounded the inhabitants of this region have now been replaced by commercial paraphernalia, trains and bustling sidewalks. As the characters enter their twilight years, Japan has begun to prosper.

The short ends with an important message about how people should live their lives. The woman seems to have lived a life of suffering in which she struggled to find happiness. After losing her father, her husband and her son, she became embittered and unable to realize the gifts she received. Even in her childhood, she seems to have focused on the negative elements around her and lost herself in her rigid perception. However, in her old age, she begins to understand that she was loved and begins to be grateful for the life she led. The portrait studio sends a warning that we, as viewers, should be grateful for the wonderful things around us and not let even the direst of circumstances poison the gifts that have been given.

Nakamura’s beautiful animation, combined with Ichikawa’s classic piano score, makes for an extremely enjoyable watch for anyone looking for a touching story. A little like The House in Little Cubes, The portrait studio manages to condense a series of powerful human emotions into a few well-constructed characters despite its lack of dialogue. The move away from language allows the work to truly become a universal experience, regardless of the film’s setting.