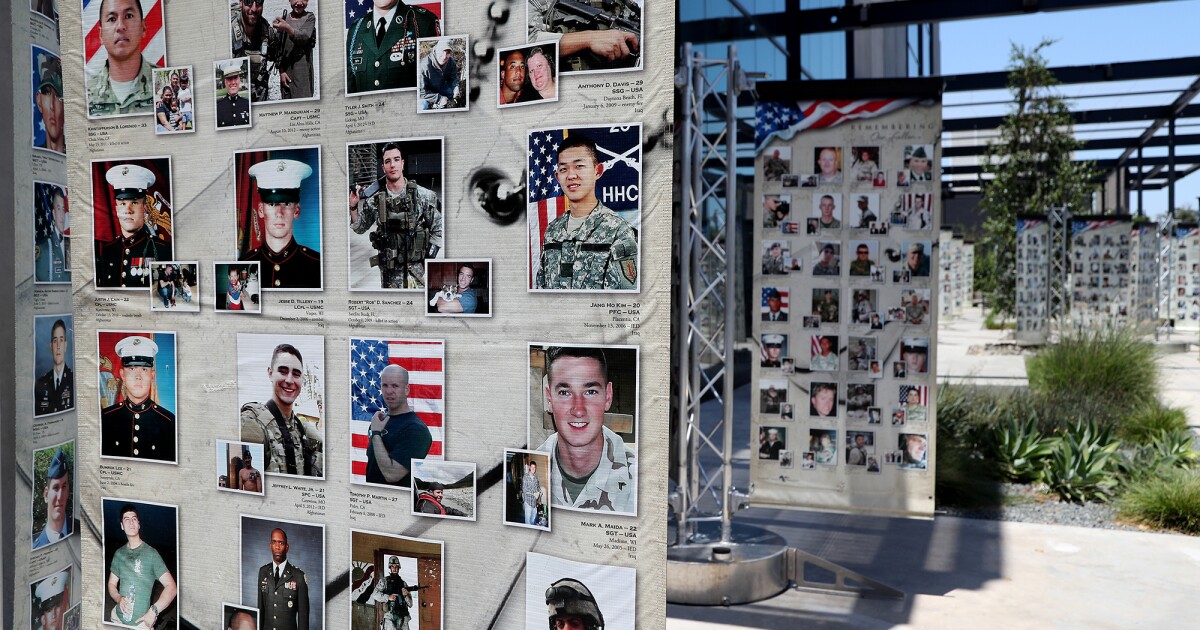 The sidewalks outside defense contractor Anduril’s Costa Mesa headquarters have been temporarily transformed into a museum designed to honor the thousands of American servicemen who made the ultimate sacrifice during the nation’s war on terrorism.

“Remembering Our Fallen” is a traveling photographic exhibit that includes the names and military portraits of more than 5,200 men and women who died in service in Iraq and Afghanistan between the September 11 attacks on the World Trade Center and the U.S. withdrawal of troops from Afghanistan. August 30.

Installed Monday, the outdoor exhibit is a project of Patriotic Productions, a Nebraska-based nonprofit organization that honors service members and veterans through memorials, lectures and flight tours. honor. The tribute will remain on display at 1375 Sunflower Ave., through July 5.

“Everyone assumes there’s a database somewhere, and there just isn’t,” Williams said, describing how her mother spent 10 years researching tributes from Gold Star families, who had lost loved ones, to add to the display. “That’s one thing that’s different about this memorial from others – it’s much more personal.”

Today, the 240-foot exhibit exists as two identical exhibits that visit sites east and west of the Mississippi River. “Remembering Our Fallen” has appeared in Pasadena’s Rose Parade, the Sturgis Motorcycle Rally in South Dakota, and outside the Pentagon in Washington, D.C.

But his beginnings were much more humble, says Bill Williams, who recalls being inspired by a 2010 Omaha World-Herald article about a father who lost his son in Iraq in 2006 and was afraid his sacrifice would be forgotten. .

The Williams, whose four sons all served in the armed forces, created a memorial to fallen Nebraska servicemen. They then built similar tributes to display in Iowa, Kansas and California, the last of which debuted in 2015 at the Ronald Reagan Presidential Library in Simi Valley.

“It was hard to find space inside,” Bill Williams said of the size of the exhibit. “That’s when we decided to make it a national memorial.”

For Tom Williams, who served in the Marines from 2011 to 2016 and was deployed in Eastern Europe to Afghanistan, honoring Anduril for the first time last year seemed fitting given that 20% of The start-up’s employees are veterans.

“We did it last year, and hopefully it will be here again in the future,” he said. “It totally aligns with our mission as a company.”

For Bill Williams, “Remembering Our Fallen” is a way to honor the most recent war sacrifices.

“It’s really about the Gold Star families,” he said. “Their fear is that their loved ones will be forgotten. The least the rest of us can do is, when the memorial comes to their town, walk through it and think of these people. It’s quite moving to see the faces of these young people.

Workspace of the month: In Ed Burtynsky's studio