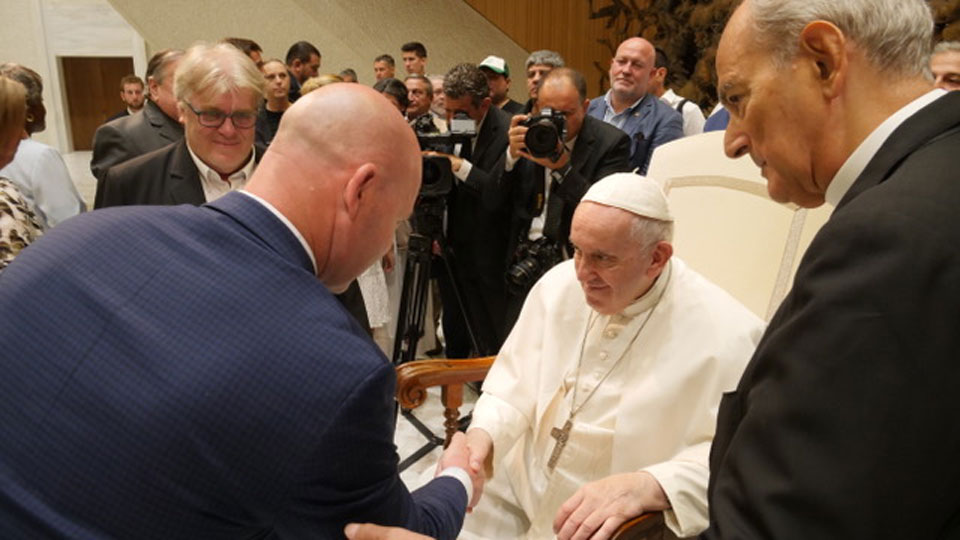 Teamsters President Sean O’Brien (back to camera) shakes hands with Pope Francis I after an August 10 discussion between International Transport Workers’ Federation delegates and Catholic officials about unions and the Catholic Church joining forces for social justice. O’Brien, AFA-CWA President Sara Nelson and Machinists Vice President Richard Johnsen were part of the ITF delegation. The three men had met with the ITF in Buenos Aires to gain international support for the Teamsters’ UPS contract campaign. Photo from Machinists website via PAI Photo Service.

WASHINGTON (PAI) â€“ With less than a year to go until their current contract with United Parcel Service (UPS), their largest, the Teamsters are stepping up their contract campaign, internal organization and search for national allies and international. They even went to the Vatican to do it â€“ and met the pope â€“ reports the union.

All of this is necessary because the UPS contract covers nearly 30% of the Teamsters’ 1.2 million members and because the current pact, which expires next July 31, has been particularly controversial among workers. It is also the largest private sector contract in the United States.

The current pact has rubbed workers raw because former union president James Hoffa and his board used a now-stripped provision of the union’s constitution to approve the four-year deal after a majority voting members of the UPS rejected it. less than 50% overall.

More importantly, during the Teamsters presidential campaign debates, O’Brien pledged to produce a much better deal, taking all necessary steps to make it happen. He leads the union bargaining team, which is strongly oriented towards rank-and-file members. Negotiations will begin early next year.

Salaries will be a key issue. UPS, like other package delivery services, has seen business boom and profits rise in the wake of the coronavirus pandemic. The plague of modern times has forced millions of consumer purchases out of physical retail stores and onto the internet, with UPS and other services delivering goods purchased online.

UPS expects total revenue to exceed $100 billion in 2022. Its own financial report showed revenue rose 15% to $97.3 billion last year, and adjusted operating profits, including including global profits, totaled $13.1 billion, up 50.8%.

The AFL-CIOs Executive Paywatch lists UPS CEO Carol Tome’s total compensation at $27.62 million for the company’s 2021 fiscal year, or 548 times the median salary of UPS workers that year. Of his sum, $1.34 million was in direct salary and $23.67 million in stock options.

The union rightly believes that the workers – not the bosses – have made the profits and deserve a bigger share of the profits, starting with a higher base salary.

Another issue will be how many, and who, UPS workers will be full-time workers covered by the new pact. Overtime is one of them, according to the union. UPS forced workers to work overtime rather than hire more drivers and warehouse workers to handle and deliver freight.

The Teamsters launched their contract campaign on August 1. It includes a campaign to register UPS workers who are not yet unionized. Many of them were drivers relegated to second-class status by the current pact â€“ a status that O’Brien and the union are calling for an end to.

UPS also hires “personal vehicle deliverers,” drivers whom UPS hires on a temporary or seasonal basis to deliver packages and who use their own vehicles, not UPS’s, to do so. O’Brien calls it outsourcing, and the Teamsters want these drivers to be regular UPS workers, covered by contract and union membership.

And when UPS drivers are in UPS trucks, an increasing number of drivers are being monitored by company-installed dash cameras. O’Brien said Business Intern the cameras “are an invasion of privacy”.

There were other negative provisions in the current pact, which could make it difficult to conclude a new contract, he added in this interview. “Walking backwards is difficult”, of this pact. But the only thing we have is that we have leverage. We have the ability to strike.

A new big issue in this negotiation will be the heat, or rather the exposure to it, in UPS warehouses and trucks in the summer. On July 27, the union sent a strong letter to Marty Urquhart, UPS Vice President for Safety and Health and Vice President of Central Region Labor Relations, about the matter.

Enjoli DeGrasse, the union’s deputy safety and health director, reminded Urquhart that the ‘general duty clause’ of the Occupational Safety and Health Act requires companies to have a ‘general duty’ to protect the health and safety of their workers at all times.

His letter cited OSHA’s seven citations against UPS from 2011, as well as nine OSHA “hazard alert letters” since then, for failing to protect drivers and warehouse workers from the excessive summer heat. The letter lists details it seeks about UPS’s protection plans, ranging from the company’s responses when drivers report symptoms of heat stroke to the availability of personal protective equipment and first aid kits. at UPS warehouses, and more.

The union has also already enlisted the president of the Association of Flight Attendants-CWA, Sarah Nelson, and the vice president of the machinists, Richard Johnsen, in solidarity with the contract campaign.

And they also traveled to the Vatican, with a stopover in Argentina to enlist the support of the International Transport Workers’ Federation, a global trade union coalition. They got it and ITF leaders Steve Cotton and Paddy Crumlin pledged to work with the union on international strategies, enlisting overseas unions that represent UPS workers.

Next, the ITF group, including O’Brien, Nelson and Johnsen, traveled to the Vatican’s Pontifical Academy of Sciences to meet Pope Francis I and discuss joining forces in the fight for global justice. , reported Johnsen. Pope Francis, an Argentinian, is a strong supporter of workers’ rights. The meeting took place on August 10.

Inside the design studio of vintage fashion expert Sophia Elizabeth

Ancient site emerges from dry lake during drought in Europe