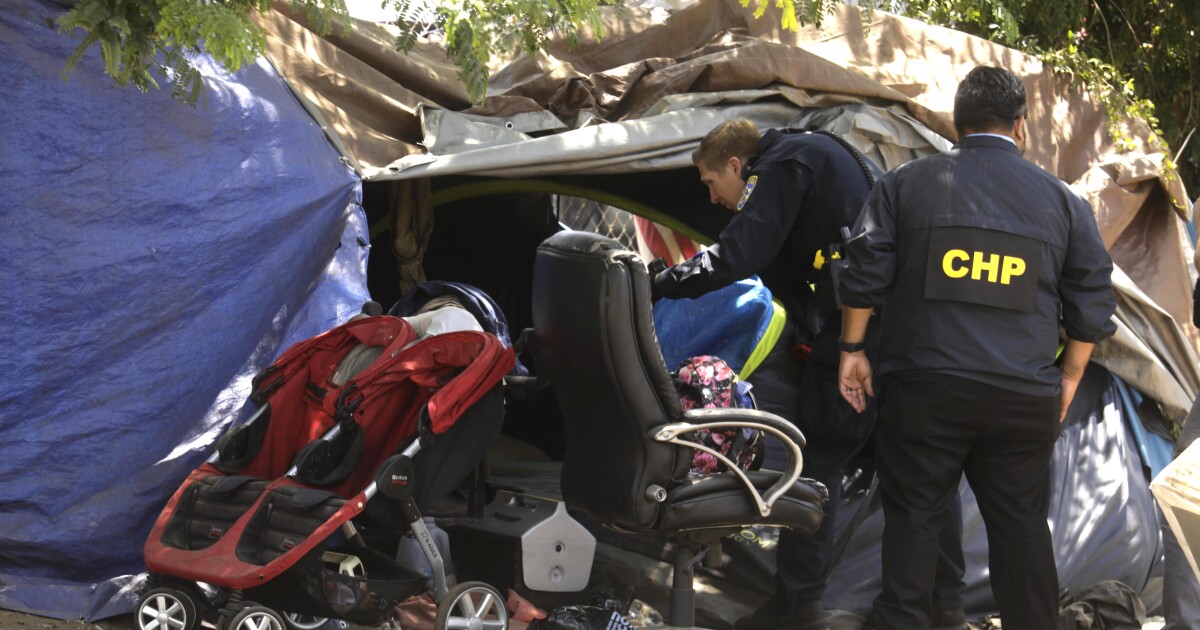 A 33-year-old man was arrested Tuesday in the shooting of a California Highway Patrol officer during a traffic stop in Studio City after an LAPD sleuth followed him to a tent at a camp in homeless from Lake Balboa, authorities said.

Pejhmaun Iraj Khosroabadi was taken into custody by LAPD approximately 12 hours after a CHP officer was shot multiple times during a traffic stop in the parking lot of Campbell’s Episcopal School Hall shortly before 8 p.m. Monday. Shortly after, the CHP charged Khosroabadi on suspicion of attempted murder of a police officer.

CHP officials say the 27-year-old officer, who has not been identified, was shot and suffered serious injuries after the shooter was slow to comply with a traffic stop in the block 4500 from Laurel Canyon Blvd. The agent has been in office for about a year.

A police source said the officer was shot in the face minutes after the traffic stop.

Khosroabadi, who was driving a white sedan, was injured and fled, authorities said. The officer was rushed to Cedars-Sinai Medical Center.

Nicholas Prange, a spokesman for the Los Angeles Fire Department, confirmed that a patient had been taken to hospital and was in critical condition.

Authorities tracked a white sedan driven by the suspect to an apartment building in Van Nuys, a law enforcement source told The Times. There, a SWAT team and other officers searched the building and used flash grenades to break into an apartment associated with Khosroabadi, police said.

Police then brought in Piper, a K-9 sleuth, who picked up the suspect’s scent near the apartment complex, Sgt. Desi Ehrlich said, adding that the colder weather overnight helped the police dog.

“Weather, heat and wind are three things that really work against a Bloodhound’s ability to track or follow. … We were pushing it to the 12 o’clock mark,” Ehrlich said.

LAPD Chief Michel Moore said Khosroabadi was found in a tent in the Lake Balboa area with a hand wound, apparently from a gunshot wound.

Deric Lewis, who lives in a tent on Gloria Avenue, said Khosroabadi entered his tent on Monday evening and spent the night there. “He had a gun and blood all over his clothes,” Lewis said.

Lewis said he and his friend Candice Wilkins were in the tent and felt like hostages of Khosroabadi, who Lewis said lived in a tent down the street.

“He asked me to go get his car,” Lewis said. “I asked him what street it was on, and he said Laurel Canyon.”

Lewis said the man said his “name was PJ, and he also called his sister.”

Lewis said Khosroabadi told him he wanted to kill himself or push the police to kill him. “I told him not to do that. I tried to talk him out of killing himself or hurting another cop,” Lewis said.

“When he jumped out of the tent, I thought he was going to move. With so many…weapons in his face, he thought against it, I guess,” Lewis said.

He described his brother as a “hardcore American who served his country” and was denied help from Veterans Affairs.

“He’s not a terrorist. He’s not a bad person. He’s the most loving person I’ve ever met and he’s the kind of guy who’ll give you the shirt off his back,” Robert Thompson-Khosroabadi said in a statement, “He was on his way to give our young autistic cousin a toy when the incident happened. PTSD can strike at any time.