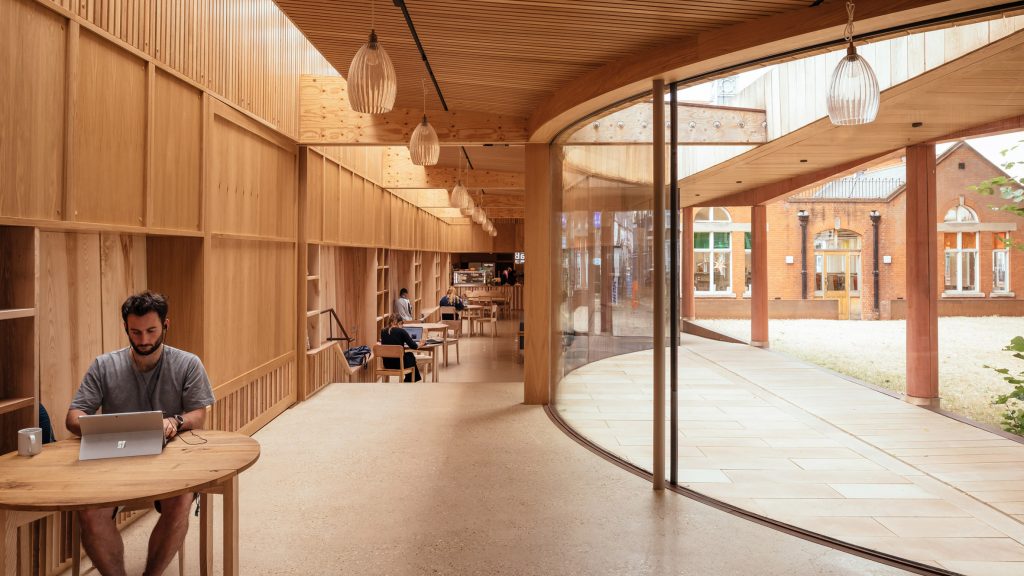 Built in 1905 in the Edwardian style, Lea Bridge Library in Waltham Forest backs onto a large green space called Friendship Gardens, which the new Community Wing overlooks through an all-glass facade.

Using the existing garden wall as a backbone, the London practice Workshop weaving inserted the narrow pavilion-like extension along its western edge.

According to the studio, this was an effort to minimize its impact on the original library building and embrace the garden as part of a new “civic heart” for the area.

Although accessed through a renovated entrance and cafe in the existing library, the community center’s position on the site also allows it to act independently with two entrances created in the eastern and southern edges of the garden.

It has a long wood-lined interior, designed to be suitable for a range of uses, from quiet reading rooms to activity spaces for community groups.

Supported by the existing garden wall, the building features cantilevered laminated veneer lumber (LVL) beams towards the garden, as well as large skylights and a wall that is fully glazed that “invites the outside in.” ‘interior’.

Responding to the root systems of mature trees in the garden, the pavilion rises and features a semi-circular cutout at its center. Here, a concealed pivoting wooden door helps subdivide the space.

Between the glazed facade and the thin concrete colonnade, Studio Weave inserted a wooden terrace and a small paved patio that provide access around the building and provide space to enjoy the garden.

Wood reclaimed from felled trees across London lines the interior floors, walls and ceilings, offering a variety of colors and textures. This includes the fluted wood joinery on the walls between the built-in seating areas.

“Since the completion of the new library extension, as locals we have witnessed the impact it has had on the community,” Ahn said.

“The extension is always bustling with occupants; children’s parties on weekends, students, mothers’ groups and workshop attendees every week.”

Founded in 2006 by Ahn, Studio Weave is a London studio that works on a wide range of public and private projects.

His earlier work includes adding a Wooden artist’s retreat in a house in Devon And one arched greenhouse for the London Design Festival 2020 which drew attention to rising temperatures in the UK.

The photograph is from Jim Stephenson.