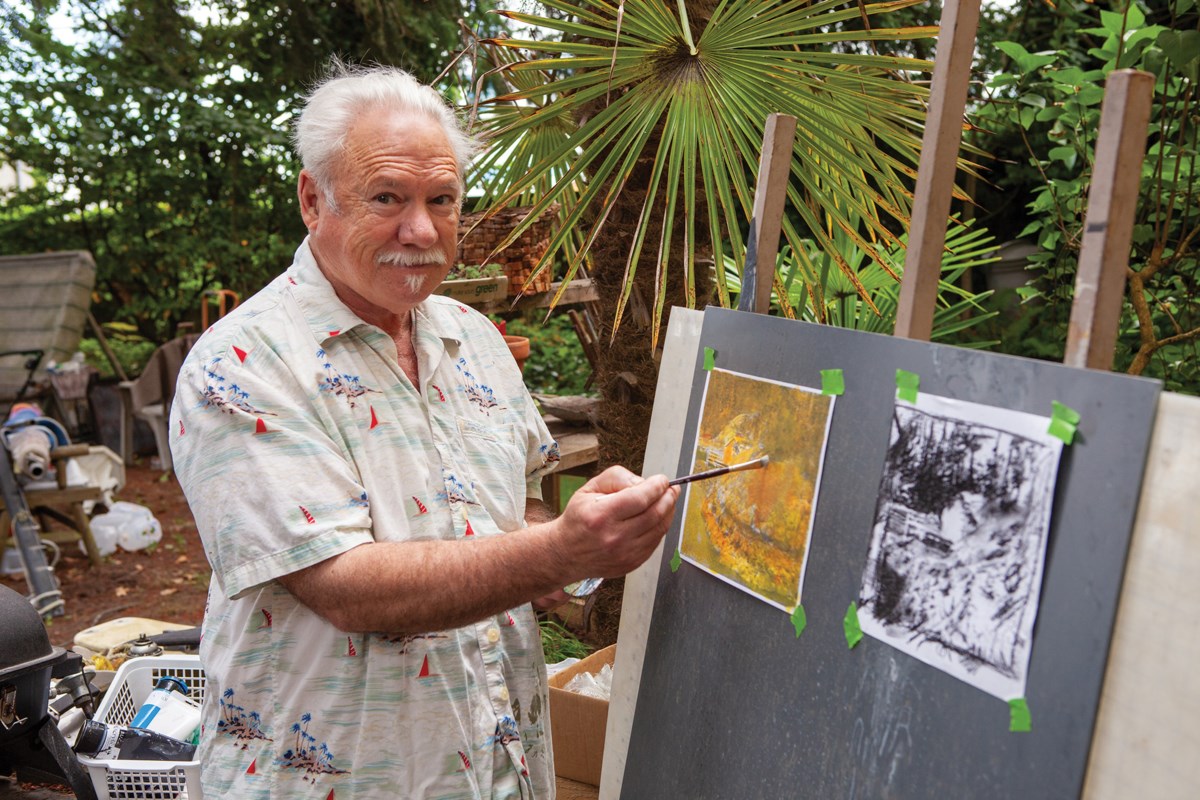 Works by Sechelt-based artist Kevin McEvoy are on display at Gibsons Public Market during the month of July, demonstrating McEvoy’s fusion of chromatic subtlety with impressionistic form that echoes the school of the Group of Seven.

McEvoy finds inspiration for his etchings, prints and photographs in the settings of the Sunshine Coast. His oil painting Chapman Creek #2 depicts whitebarked birch trees rising from a rainforest carpeted in autumnal gold. Lone Pine is a direct allusion to Tom Thomson’s early 20th century masterpiece The Jack Pine, with the titular tree transplanted into a distinctly West Coast seascape setting.

In Rock Wall, McEvoy forgoes the usual rich palette of oil paint to present a monochromatic bluff. He uses delicate colors only sparingly for the lichen stains that dot the cracked granite face.

Digital technology gradually became part of McEvoy’s process to define a distinctive look. “I’m a photographer and I’ve been working from photographs for a long time,” he said. “A friend of mine introduced me to Photoshop, among other things, and showed me a bunch of filters. So you take the photo and then run it through the computer and apply a watercolor filter to it. Then I Photoshop is an amazing thing for artists.

McEvoy earned a degree in Art Education from the University of British Columbia and also took printmaking classes at Emily Carr University of Art and Design. At UBC, he studied with English-born abstract artist Gordon Smith and Scottish painter Sam Black. After graduating from UBC, McEvoy warned him that few art teachers continue to create their own work once they take on classroom responsibilities.

Until his retirement last year, McEvoy taught art in School District 46, first at Chatelech Secondary and then at Sunshine Coast Alternative School. In 2007, he created the iconic art installation at the entrance to Chatelech, made up of individual hand-crafted copper panels.

In the midst of McEvoy’s work, a student climbed the scaffolding and defaced the work in progress by spray painting the words “Grad 2007”. Since the offense was committed in full view, the vice-principal easily nabbed the student and assigned him to a form of restorative justice.

“I had copper panels hammered with me in the metal shop,” McEvoy said. “I let him hammer out seven panels of his own design. He probably thought, ‘You’ll never put them on the wall.’ And then one day, he comes running to me at lunch and says, ‘You put my signs on the wall!’ I said, ‘Okay, now you see you’re an artist.’ He was beaming. After that, no one ever came near the wall as long as he was a high school student.

As an art teacher, McEvoy did not limit his art to the classroom. McEvoy continued to refine his style and experiment with new techniques, sometimes influenced by his own students. He used their leftover paint from ersatz palettes made from egg cartons to create works with a carefully spartan range of colors.

“I didn’t even make a decision about what colors I would choose,” he said. “Whatever the universe provided was what I was going to use.”

McEwan’s landscapes and wildlife studies remain on display in the Gibsons Public Market atrium until July 31. He maintains a website, kevinmcevoyart.ca, which features a gallery of recent work.