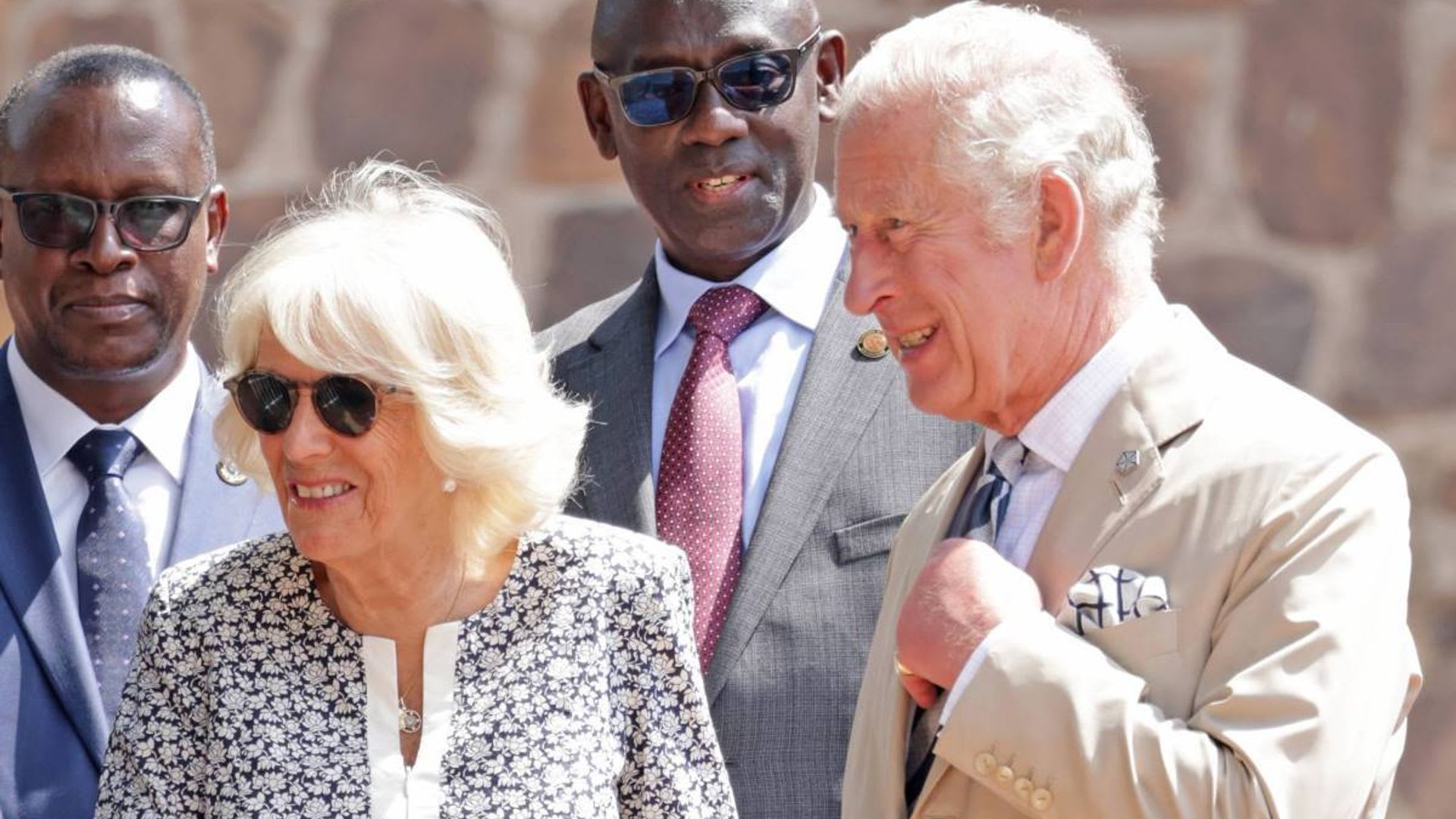 
Prince Charles visited an agroforestry site in Rwanda, where he spoke about his interest in organic farming and farming in the region

The Prince of Wales joked after being set up for a photo among some bamboo, saying, “I feel a little bamboozled.”

Posing for the picture at the request of The sun’royal photographer Arthur Edwards, the heir to the throne leaned against one of the trees saying, “I feel like I need to hold on to something.”

Charles was visiting an agroforestry site run by the Albertine Rift Conservation Society, which has transformed local farmland in Bugesera district to Rwanda by planting crops among the trees.

Dr. Sam Kanyamibwa, Executive Director of ARCOS and the organization’s Director of Community Engagement, Brigitte Kanyamugenge, gave him a tour of the three-acre plot.

He also met Jean Bosco Murenzi, president of the Koimizanya cooperative – a group of 100 local farmers including 45 women – who are working with ARCOS to restore land bordering the Lake Busegera wetland.

The partnership, which is backed by the Rwandan government, has increased income, yield and biodiversity in just six years since the project began in 2016.

The prince, an avid gardener and farmer himself, was fascinated by their work and stopped to admire the young trees grown in the centre’s nursery, including avocado, orange and lemon trees.

She was told that the co-op was very disorganized at first, but now was much better organized and had a vision. “And a lot more land!” Charles said. “I’m fascinated by all these species, do they all have different properties? You have to protect them with shade.”

It was then shown before and after photographs of the landscape before the project started and now, showing the stark difference.

In 2016, the land was very dry and the soil was of poor quality as farmers planted corn, beans and other crops in the wetland.

Charles and Camilla are on their first royal tour of Rwanda

Today, the wetland’s natural vegetation and wildlife have been completely restored as farmers instead use adjacent land that has better soil thanks to their new techniques and a solar-powered irrigation system.

“We have learned to better manage the environment,” Jean Bosco told him. “I’m so glad I got to see what you do,” the Prince replied.

Charles ran a handful of soil between his fingers to compare the degraded version from before to the nutrient-rich soil produced by the co-op by adding organic matter and avoiding artificial fertilizers. “That’s why I went organic almost 40 years ago,” he said. “It (the ground) has been degraded.”

He was joined for the visit by Juliette Kabera, Director General of the Rwandan Environment Management Authority and Rwandan Environment Minister Mujawamariya Jeanne d’Arc, who told the future king: “The restoration that you are advocating , your Royal Highness, you can see how it is implemented. That’s wonderful.

The couple also paid their respects at the Kigali genocide memorial

Charles also met some of the farmers working the land and heard from them how they have seen more fertile soils, more wildlife and vegetation and more rainfall as the water table has risen since the start of the partnership with ARCOS.

The Prince then spoke with Stéphane Hallaire, President of Reforest’Action to discuss the launch of the Living Lab of the Circular Bioeconomy Alliance in Rwanda.

They were joined by Barbara Nel of Astra Zeneca, who supports the Circular Bioeconomy Alliance, although she told Charles the company was “still working on the vaccine”. “It’s very important as I get older,” joked the prince, who has had Covid twice.

Dr Sam Kanyabimwa then said, “It was so inspiring to talk to the Prince. They (the farmers) were telling him that they had seen the change, especially in the environment. They have more food, air fresh and feel so encouraged.”

Rwanda is the second most densely populated country in sub-Saharan Africa and has steeply sloping agricultural land with a high risk of soil erosion.

The royal family arrived in Rwanda on Tuesday

About 30% of the country is forested, but there is little land to expand forest plantations with a growing population that depends on wood for cooking. But more than 45 percent of Rwanda’s 2.4 million hectares of land is potentially suitable for agroforestry, which would improve land for agriculture while strengthening the forest.

Rwanda was the first African country to declare a land restoration target in 2011 and has an agroforestry strategy in place, but needs investment in research and training to implement techniques at scale .

Founded in 1995, ARCOS Network works to improve biodiversity conservation and sustainable natural resource management in Uganda, Rwanda, Burundi and the Democratic Republic of Congo. Its motto is Collaborative Action for Nature and People.

Make sure you never miss a ROYAL story! Sign up for our newsletter to get all our celebrity and royalty news straight to your inbox.