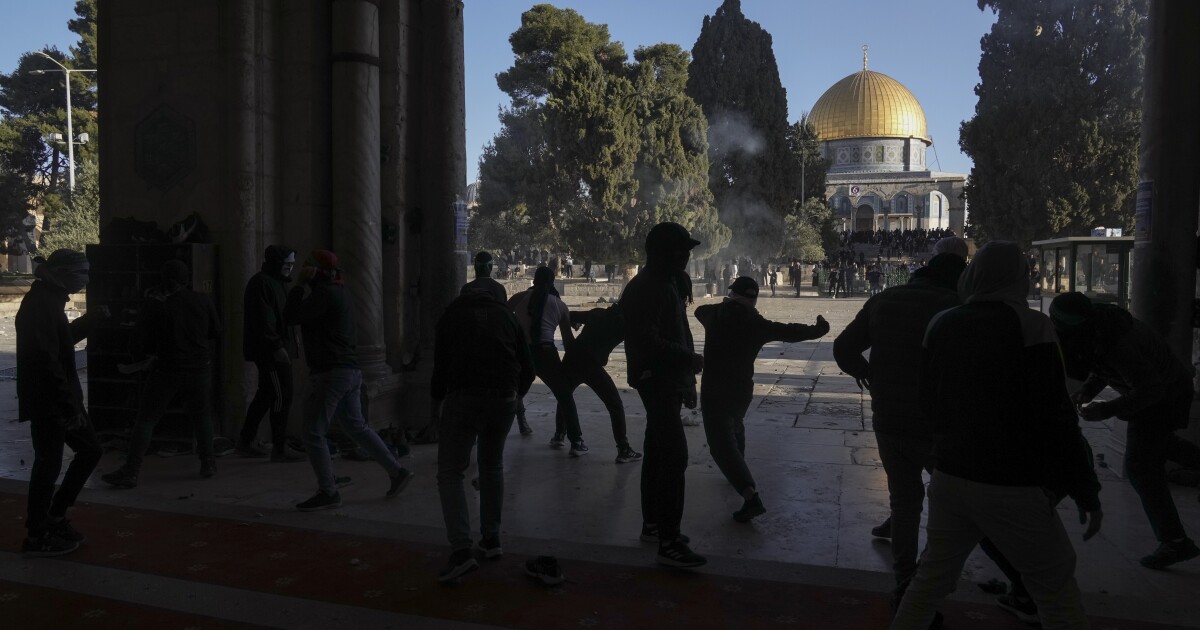 The site, which is sacred to Jews and Muslims, has often been the epicenter of Israeli-Palestinian unrest, and tensions have already escalated amid a recent wave of violence. Clashes at the site last year helped spark an 11-day war between Israeli forces and Hamas militants in the Gaza Strip.

The clashes come at a particularly sensitive time. This year, Ramadan coincides with Passover, a major Jewish week-long holiday beginning Friday at sundown, and Christian Holy Week, which culminates on Easter Sunday. The holiday is expected to draw tens of thousands of worshipers to Jerusalem’s Old City, home to major sites sacred to all three religions.

Hours after the clashes began, police said they had ended the violence and arrested “hundreds” of suspects. The mosque was reopened and some 60,000 people attended the main Friday noon prayers, according to the Waqf, the Islamic endowment that administers the site.

After the prayer, thousands of Palestinians marched around the esplanade, chanting “with our souls, with our blood, we sacrifice ourselves for you, Al Aqsa”, in addition to slogans in support of Hamas, the Islamic militant group that rules Gaza.

Less than a kilometer away, thousands of Christians marched in a procession retracing the traditional journey of Jesus to the cross in honor of Good Friday. The Church of the Holy Sepulcher was open to visitors, who are returning in large numbers to the Holy Land for the first time since the start of the pandemic. The violence was confined to the mosque compound.

Israeli authorities said that before the violence broke out, they conducted negotiations with Muslim leaders to ensure calm. But police say Palestinians stored rocks and other items inside the compound and threw rocks at the Mughrabi Gate, which leads to the Western Wall – an important Jewish holy site – sparking violence .

Palestinian witnesses who spoke on condition of anonymity for security reasons said a small group of Palestinians threw stones at police, who then forced their way into the compound, sparking a wider conflagration. The Palestinians view any large deployment of police in Al Aqsa as a provocation.

Palestinians threw rocks and fireworks, and police fired tear gas and stun grenades at the sprawling compound surrounding the mosque. Dozens of Palestinians barricaded themselves inside the mosque as they fought Israeli security forces.

Israeli police then entered the mosque and arrested people inside. Israeli security forces rarely enter the building, an act also seen by Palestinians as an escalation.

The Palestine Red Crescent emergency service said it treated 152 people, many of whom were injured by rubber bullets or stun grenades.

The video showed police beating a Waqf photographer with batons before throwing him to the ground and kicking him. According to the Waqf, the photographer, Rami Khatib, broke his hand. There was no immediate comment from police.

Israel Police said three officers were injured by “massive stone throwing,” and two were evacuated from the scene for treatment.

Neighboring Jordan, which has custody of the holy site, and the Palestinian Authority issued a joint statement accusing Israel of “a dangerous and reprehensible escalation that threatens to explode the situation”. Egypt also condemned the “Israeli raid”.

Israeli Public Security Minister Omer Barlev, who oversees the police force, said Israel had “no interest” in the violence at the holy site, but police were forced to confront ” violent elements” who attacked them with stones and metal bars. He said Israel is committed to freedom of worship for Jews and Muslims.

Tensions have skyrocketed in recent weeks after a series of Palestinian bombings that killed 14 people inside Israel. Israel carried out a wave of arrests and military operations throughout the occupied West Bank, sparking clashes with the Palestinians.

At least 25 Palestinians have been killed in the recent spate of violence, according to an Associated Press tally, many of whom had carried out the attacks or were involved in the clashes, but also an unarmed woman and a lawyer who appear to have been killed by mistake.

Earlier this week, Hamas and other militant groups in Gaza called on Palestinians to camp at Al Aqsa Mosque over the weekend. Palestinians have long feared that Israel is considering taking over the site or dividing it.

Kaniakapūpū is a banned cultural site, but the virtual tour offers a legal way to explore the site