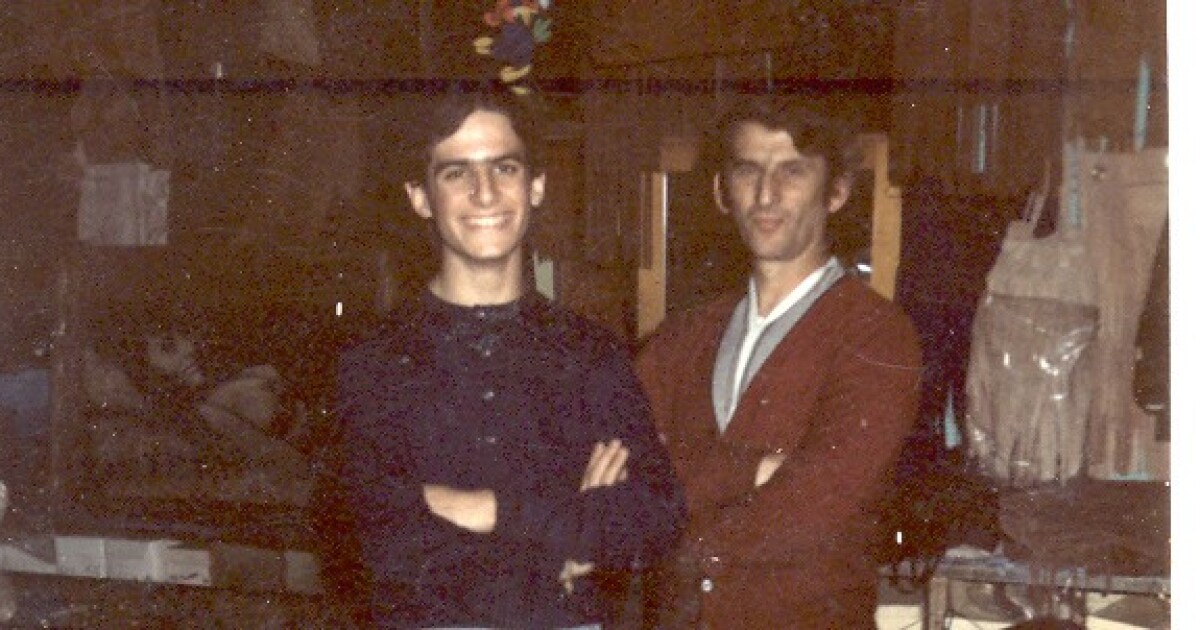 Artenstein is a filmmaker and teacher. He lives on Ocean Side.

The black velvet paintings got me through film school, along with the cowboy jackets and hand-crafted leather bags – all top sellers from my dad’s curio shop on the Avenue Revolution. I loved art and was always the kid whose drawings were pinned to the classroom wall in elementary school. It made me very proud and helped me realize what I wanted to be when I grew up.

I helped at my dad’s store selling to American tourists (and learning English in the process). The 1960s and 1970s were the golden age of black velvet painting: bucolic Mexican landscapes, bullfighting scenes, Aztec warriors carrying Aztec maidens to sacrifice, and rock ‘n’ roll legends such as Jimi Hendrix, Jim Morrison, Janis Joplin – and the biggest seller of them all, Elvis Presley, with a tear rolling down his cheek.

As the oldest child, I always felt like I was expected to take over the store, but my father surprised me one day by offering me art lessons with Tarasco, the first black velvet painter from Tijuana. I showed up at his studio expecting to start working on the Playboy centerfolds, as Tarasco was known for his photo-realistic renditions of Playmates, like the classic Gwen Wong.

I was not to go near those Playboys. Tarasco – whose real name was the historically significant Fidel Cortez – sat me down on a stool, and with pencil in hand he made me draw from a white plaster bust of Paris, dramatically lit on the one hand. I first had to learn line and shadow and how to render three-dimensional shapes before picking up the brush.

It was the method of the Academia de San Carlos, where Diego Rivera, David Alfaro Siqueiros, José Clemente Orozco and my beloved maestro studied. He remembered his years as an art student in Mexico City by showing me his collection of old leather-bound volumes, illustrated with engravings by the old masters, from Albrecht Dürer to José Guadalupe Posada, acquired in the flea markets of the city district. . old city center.

When I started making movies, Tarasco magically appeared on the corner of Calle Cuarta and Avenida Revolución, where my superochero brother, Gustavo Vazquez, and I were about to shoot a night scene with spotlights on homemade stands in Gustavo’s father’s metal workshop. . Tarasco squinted, made a few adjustments, and gave us an impromptu lesson in using keying, fill, and backlighting to create mood and three-dimensionality on celluloid.

We were in high school at the time, and there were two artists from Tijuana who were going to gain international recognition at the time: painter and installation artist Marta Palau, and Benjamin Serrano, post-surrealist painter and provocateur. Juan Angel Castillo, the most important landscape artist in Baja California, and Miguel Najera, the renowned muralist, were still working on black velvet at the time.

After graduating from the California Institute of the Arts, my wife Jude and I moved to San Diego to create independent documentaries and feature films inspired by the cultural dynamics of the border region. We also got involved in the Border Arts Workshop/Taller de Arte Fronterizo with friends like David Ávalos, Víctor Ochoa, Emily Hicks, Michael Schnorr, Robert Sánchez and Guillermo Gómez Peña. Our stated goal was to initiate collaborations with artists and writers across the border, including Felipe Almada, Hugo Sánchez, María Eraña and Marco Vinicio, and to take border art…well, beyond its borders.

The workshop embraced borderline kitsch – from plaster of Paris ETs and Bart Simpsons to, yes, you guessed it, black velvet paintings. The quintessential crying Elvis became part of the set for our shoot of Gomez Peña’s historic performance “Border Brujo.” Afterwards, he became so obsessed with the medium of black velvet that he began commissioning original black velvet works from artists in Tijuana (the art of the maquiladora, we called it) and selling them. exhibit widely as “The Black Velvet Hall of Fame”.

Since the days of Border Arts Workshop/Taller de Arte Fronterizo, art has exploded in the Tijuana-San Diego area, with many of its visual artists gaining international recognition and seeing their work exhibited and acquired by museums and institutions. of the whole world. Significantly, the Whitney Museum of American Art in New York recently announced the participation of two Tijuanense artists, Alida Cervantes and Andrew Roberts, for its 2022 Biennale.

Over the years, this border region has provided me with a wonderful canvas (or roll of black velvet) for artistic expression. My most recent documentary, “The Journeys of Harry Crosby,” about the legendary photographer and historian of the Baja California Peninsula, will premiere at the Centro Cultural Tijuana on July 20 and at the San Diego History Center on July 28 before to air on PBS this fall.