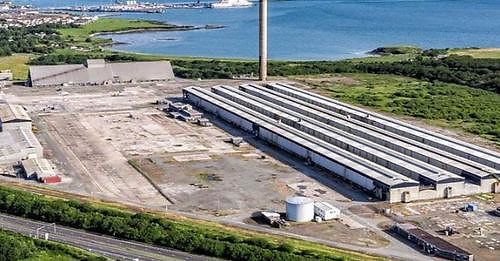 The operator Stena Line, also owner of the port of Holyhead, bought the former site of Anglesey Aluminium.

The merger ended at the site in 2009 – Orthios later took it over and developed a materials recycling facility.

But earlier this year the company collapsed and up to 100 employees lost their jobs. Begbies Traynor has been appointed as a director by the lead investor and the land has been put up for sale.

Now Swedish ferry company Stena – which has owned and operated Holyhead Port for 27 years – has announced it has purchased the 213-acre site. They said it was purchased to facilitate the expansion of port operations in the area.

The company said the new site has the potential to provide additional land and services to existing customers and attract new uses and long-term investment to Holyhead.

Ian Hampton, Managing Director of Stena Line UK Ltd, said: “This purchase is a significant investment for us and forms an important part of our long-term strategy for the future of Holyhead Port. Our plans for the site have the potential to be a significant boost to the regional economy and local jobs. Holyhead is the largest port we own and remains the second busiest RoRo port in the UK, as well as the main route to Ireland.

NorthWalesLive says more about the acquisition of the former industrial site.