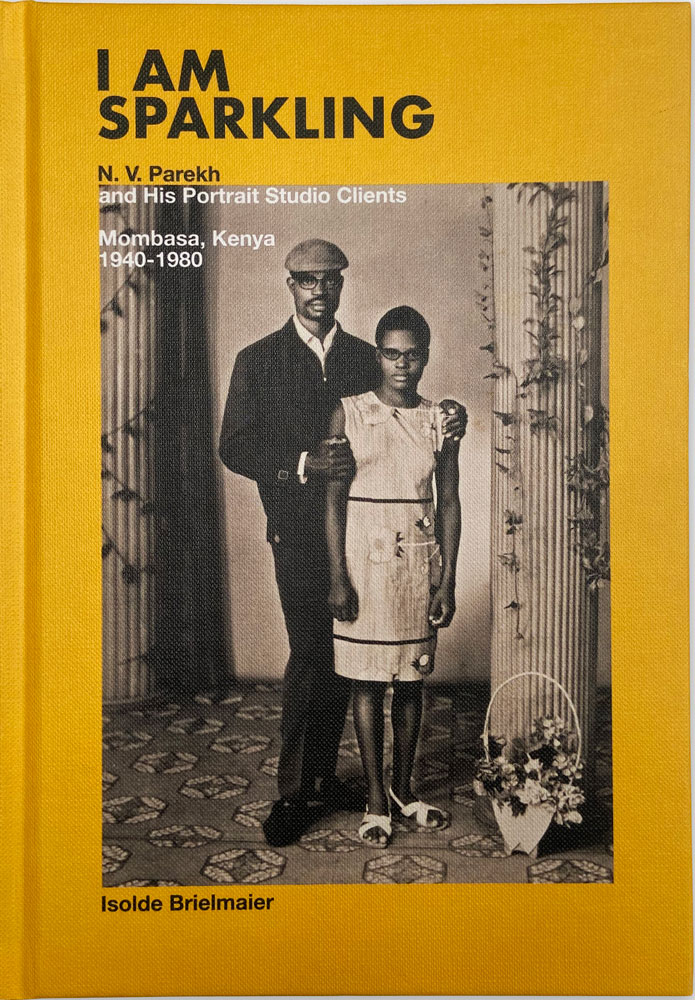 Iseult Brielmaier
I Am Sparkling: NV Parekh and His Portrait Studio Clients
(Damiani, 2022)

“Look, I shine in this photo!” exclaimed Ms Uweso, describing her portrayal of NV Parekh’s Mombasa studio to Isolde Brielmaier several years later. This is one of many first-hand accounts of Parekh models included in Brielmaier’s recently published book, I Am Sparkling: NV Parekh and His Portrait Studio Clients: Mombasa, Kenya, 1940-1980. It was the turn of the millennium and Brielmaier was reflecting on the wave of postcolonial studies and theories â€“ she was eager to get started. Small selections of studio portrait photographs from East Africa circulated in the North. This herd of images, on the one hand, was suitable for the creation of inter-global awareness; however, one crucial problem remained: people were still talking and theorizing about the subjects’ identities and experiences. As a result, Brielmaier, then a graduate student at Columbia University and now deputy director of the New Museum, spent fourteen months in Mombasa, Kenya, uncovering thousands of lost Parekh records, most of which were poorly maintained. , with the mission of rediscovering the museum of Mombasa. rich visual history, through the words of the models that constituted the very content of the images. His research at Columbia provided the impetus for i am bubblywhich presents an unpublished archive of studio portraits supplemented by first-hand interviews with Parekh’s distinct clientele.

Ms Uweso was one of many clients who visited the Mombasa studio owned by the Indo-Kenyan photographer. Parekh first opened his black and white portrait studio in 1942. During this period and well into the 1980s, individuals visited Parekh’s studio from all over East Africa, eager to have their pictures taken. . Clients commissioned all kinds of portraits, often commemorating significant events such as weddings and graduations, among other festivities. It was a chance to emulate their sense of personality. In this, the studio allowed a pivotal space for identity formation. After Parekh’s retirement in the early 1980s, his seminal portraiture practice became virtually unknown.

Brielmaier’s book offers a counter-narrative to engagement with African photographic archives as well as photographic histories in general. Challenging the history of canonization and prioritization of photographers, she instead shifts the focus to Parekh’s sitters, particularly women, as a crucial part of the image itself. She fosters a new space to explore East African identity, showcasing agency and visibility through the themes of fashion, history and portrait photography. When discussing Parekh’s portraits, Brielmaier told me, “Too often African voices are silenced or overlooked,” so she included several testimonials from clients of Parekh’s studio to amplify their stories and their experiences in the photo studio. And in doing so, Brielmaier sheds light on why individuals, particularly in 20th-century East Africa, sought out portraits and, by extension, how they used their images when completed.

Brielmaier’s vivid visual descriptions not only transport readers through time, but encourage readers to critically engage with the role of studio photography in diaspora communities. In her book, Brielmaier says that Parekh “was very aware of the cross-cultural nature of her photographic practice”. In a 1956 wedding portrait, a Swahili client is dressed in a kanzu (dress) and Kilemba (headgear), while holding a traditional Omano-Arab sword, indicating his multi-ethnic identity. The focus on Parekh’s diverse customer base shines a light on Mombasa’s history. In 1896, a flood of immigrants â€“ many indentured servants â€“ from colonial British India, arrived in the port of Mombasa to build the Mombasa-Uganda Railway. Parekh’s imagery encapsulates these rich histories and expresses the intersection of visual culture and multiple diasporas.

Parekh’s collaborative practice plays with several cross-cultural references. His black-and-white portraits were often staged, with varying poses, alternate props, experimental lights, and sets. Beyond this, Parekh’s compositions often borrow visual elements from formal European painting, while simultaneously including cinematic references to Bollywood. In Portrait (couple in sunglasses), from 1957, a couple poses, the man slightly higher, in profile, both wearing sunglasses. Their shared mysterious gaze is further enhanced by Parekh’s use of old Bollywood theater, including dramatic lighting, poses and composition. These cross-cultural dialogues reflect the social and cultural exchanges along the Indian Ocean coast of East Africa at that time.

Fashion is another major theme seen throughout Parekh’s image making. The years following Kenya’s independence in 1963 marked an influx of desires for new modes of urban subjectivities, with studio clients experimenting with fashion and hairstyles, among other visual elements. Portrait of a couple, from 1970, depicts a young man and a young woman, face to face, leaning on a classic column, their hands lightly touching. He wears a dashiki, a common fashion item in Africa and the United States, especially in the 60s and 70s, while she wears an elegant plaid dress. Parekh’s designs often drew on references to 1960s African-American culture, such as the afro and dashiki. His studio provided a space for Mombasans to shape themselves and express their place in the culture.

i am bubbly encourages readers to rethink histories of power and privilege, and more so, its relationship to the archive. These are Brielmaier’s critical questions, such as “What did they do with their footage when it was finished?” which invite the reader to contemplate the importance of maintaining archives as a form of diasporic connection and even remembrance. Brielmaier’s book reveals Parekh’s studio as a space for clients to control how their images would look and, more importantly, how their images would be used. Brielmaier’s approach to reading Parekh’s work closely parallels art historian Tina M. Campt’s ideology of listening to images as critiques for the Black Atlantic archive. Parekh’s visual archive is a testimony or, as Campt puts it, a â€œpractice of visibilityâ€.1 i am bubbly is part of Brielmaier’s efforts to fill the missing gap in photography research in East Africa.