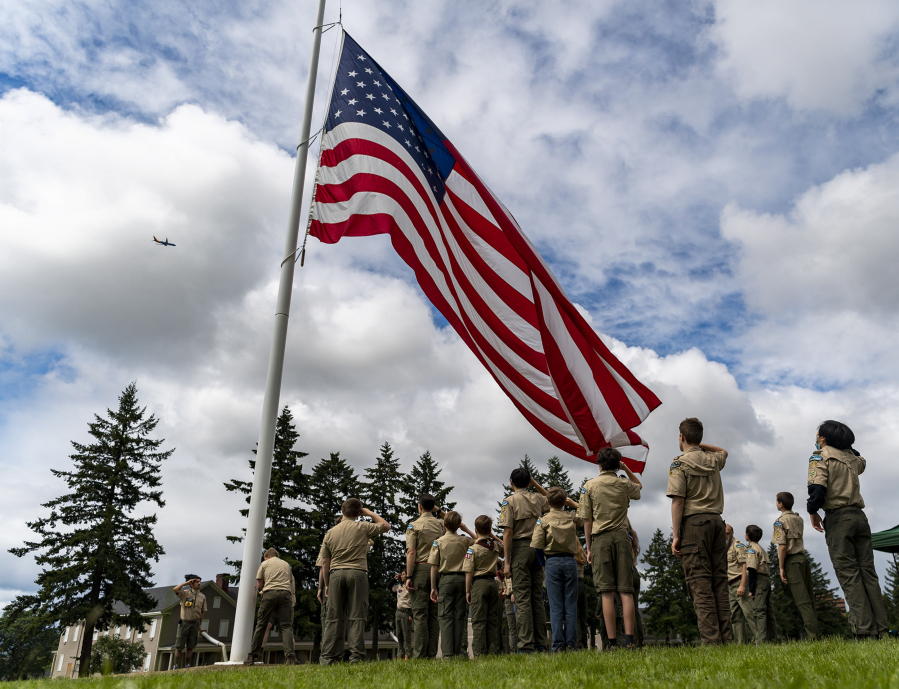 For the first time since the start of the COVID-19 pandemic, the full event took place at the Fort Vancouver Parade Ground. It was held virtually in 2020 and a scaled down version was held at Fort Vancouver Barracks in 2021.

Vancouver Fire Chaplain Peter Schrater began by urging participants to remember the people who served in the conflicts more than the conflict itself.

The first guest speaker for the day was Fort Vancouver Historic Site Superintendent Tracy Fortmann, who noted that her family’s military history led her to a career in public service.

“I was taught that service was the obligation of every American,” she said. “We must choose today and every day to come together as Americans to honor the sacrifices of the past.”

Vancouver Mayor Anne McEnery-Ogle echoed that sentiment, asking attendees to reflect on what Memorial Day means to them.

Rep. Jaime Herrera Beutler, R-Battle Ground, also made remarks. Herrera Beutler said speaking at the event was an honor and something she treasures. She talked about local soldiers who died in battle, like the army sergeant. Eric Emond of Brush Prairie, who died in 2018 after an improvised explosive device hit his vehicle in Afghanistan. This was Emond’s seventh deployment. He had been in the army for 21 years.

“He was a decorated hero and truly embodies what it meant to be a soldier in the United States Army,” Herrera Beutler said. “His story of service and bravery will live on.”

Special remarks were given by Gold Star Spouse Melissa Scholl-Bellah, who lost her husband Lance Cpl. Michael Scholl in November 2006 – a month after the birth of their daughter, Addison.

“Over the years, how I feel about Memorial Day has changed,” Scholl-Bellah said. “Of course, the sadness never goes away… but the pride, honor and true selflessness of men and women takes over.

“I know that deep down, these American heroes would not want us to be sad, but to remember them, honor them and tell their stories,” she added.

The keynote speaker was Colonel Todd Hofford, who commands the 142nd Wing at Portland Air National Guard Base in Oregon. Hofford began by giving a brief history of Memorial Day, which began after the Civil War. He then noted that it was the first Memorial Day with full nationwide celebrations since the COVID-19 pandemic began.

“For the first time since 2019, Americans will come together again for parades and ceremonies,” he said. “We will shed tears and share fond memories of those who came before us. Today, we honor their dedication, their courage and their sacrifice.

“As history often reminds us, freedom is not won freely, nor is it easily retained. It must be permanently safeguarded by each generation,” he added.

Hofford concluded his speech by echoing Scholl-Bellah in saying that the dead would want us to celebrate Memorial Day.

“Those who fought for us, our lives, our freedom and our pursuit of happiness, would be honored to have us celebrate all that their sacrifice left us.”