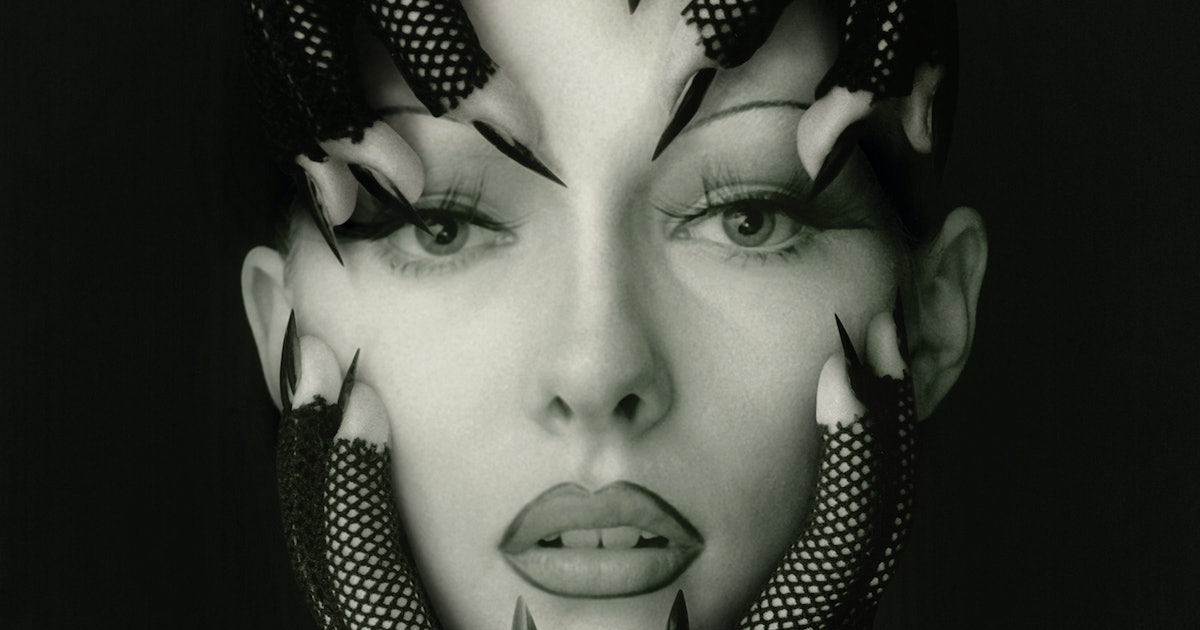 London make-up artist Daniel Sallstrom describes this story as “fan fiction” inspired by the work of his three creative heroes: French photographer-artists Pierre Molinier, Serge Lutens and Irina Ionesco. “The way they created images in the 1950s, 1960s, 1970s and 1980s was absolutely revolutionary,” says Sallstrom. “Molinier created incredible collages with hands, legs and other body parts. Serge has always had a sense of absolute beauty; I remember the first time I saw one of her pictures, I thought to myself, who are these amazing women hiding in dark rooms like glamorous ghost creatures? As for Irina, you look at a picture of her, and it’s quite a story, literally an entire movie in one frame.

For this shoot, Sallstrom and photographer Jordan Hemingway incorporated many stylistic nods to Molinier, Ionesco and Lutens – faces masked by lace or covered in white pigment; bodies that look like fragmented statues; dramatic headdresses, dark ensembles and sky-high hair sculptures, but managed to turn them into something innovative.

Sallstrom spent his formative years in the late 90s in Gothenburg, a city on the west coast of Sweden. “The thing about Sweden is that it’s a pretty dark place,” he says. “You barely get any sun in the winter, and way too much in the summer, when it never sets. The gloom has led me to have a love affair with the slightly darker things in life.

Sallstrom began experimenting with makeup and women’s clothing when he was 13, and the endless performative and transformative options in cosmetics continue to fascinate him. “I used my face as a canvas and became interested in how you can create characters, tell stories and manipulate situations with makeup,” he says. “You can make a male face into a female face, or vice versa. You can turn into a cat, turn into a sexy mistress, or even become an abstract painting.

You can also move to London at 19, be discovered by MAC, become one of fashion’s most in-demand makeup artists and work with Rihanna, Grace Jones, Kanye West, Rick Owens, Alessandro Michele, Naomi Campbell, Dominique Jackson and Bella Hadid, all before the age of 36. Sallstrom’s signature style? “I don’t think I really have one,” he says. Trends are not its driving force either. “Self-expression is what inspires me the most. In these times especially, it is important to focus on individuality and to capture the beauty and the positive wherever you can, even in the shadows.

Celeste wears the stylist’s own gloves.

Manicure by Sylvie Macmillan at MA+Talent. Models: Celeste at Models 1; Harriet Longhurst at Next; Kayako Higuchi to the management of the company. Casting by Michelle Lee at Michelle Lee Casting. Scenography by Afra Zamara at Second Name.