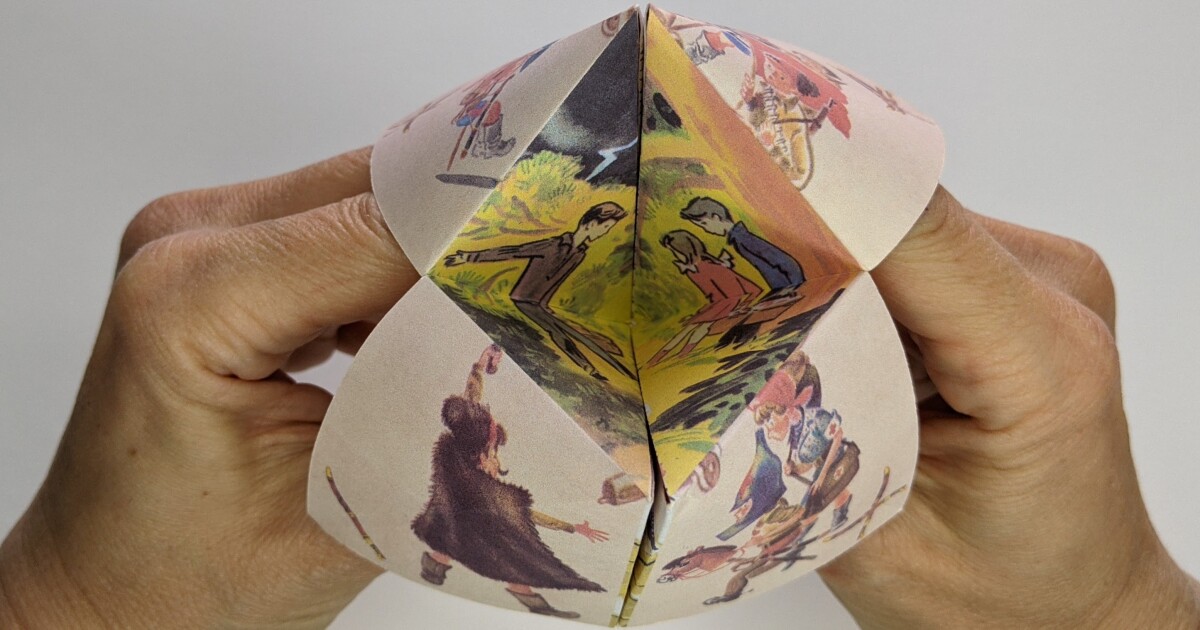 When Jenny Yurshansky’s parents fled Soviet-era Moldova in 1978, they could only take a handful of items with them — which would essentially fit into two small the suitcases. No valuables were allowed, only those essentials for survival; they could bring less than $300 in cash and no education documents.

Michael and Rima Yourshansky stuffed with clothes and blankets in their bags. Rima packed an embroidered baby hat and alphabet baby book for her soon-to-be-born daughter, Jenny. Yurshansksy was born in Rome months later in January 1979, and her parents – asylum seekers at the time, awaiting clearance to enter the United States – eventually settled in Northridge. The items they had transported from Eastern Europe became part of their new home in California.

Now these objects have informed an exhibition centered on family migration and the inherited trauma of exile, a hot topic as more than 2.5 million Ukrainians have fled the country in recent weeks since the invasion of Russia. Yurshansky joins a legacy of artists who have probed themes of displacement, trauma and loss related to the global refugee crisis, including photographer Tom Kiefer, who has rescued and photographed the belongings of migrants and asylum seekers. abandoned asylums when they crossed the US-Mexico border, and Chinese artist and human rights activist Ai Weiwei, whose many art and media projects focus on the plight of refugees, freedom of expression and life in exile.

Yurshansky’s solo exhibition, “A Legacy of Loss: There Were No Roses There,” on view at American Jewish University through May 12, is comprised of five sculptural installations, a one-piece multimedia and an audio tour. The titular “There Were No Roses There (Diaspora)” – a welded steel climbing rose vine that has been charred in a kiln and features glass roses with brass thorns – traces three generations of his family’s migration to Argentina, Germany, Israel or the United States over the past 100 years. It is also a register of family members killed during World War II.

Yurshansky, who now lives in the Lincoln Heights neighborhood of Los Angeles, said she was inspired to create the exhibit after return trips to Moldova with her mother in 2016 and 2017.

“I had obtained an artist grant from Asylum Arts to bring my mother back to Moldova for the first time since her flight,” explains Yurshansky. “I wanted to explore this theme of what it means to be a refugee, using my own family as a case study.”

The through lines of the exhibition are universal, says Yurshansky. “Abandoning your home and leaving everything behind and coming to a totally unknown place brings generational trauma,” she explains in this edited conversation. “I think there’s a lot of denial in the United States because there’s this myth of Americanness, that our pasts have been erased and our slates wiped clean. That we belong in this space while others do not. Combined with the fact that our families don’t want to talk about it, it’s too painful. The exhibition is meant to provide a place to have open discussions about this harsh reality.

Your broadcast is particularly timely. Do you think about exposure differently now?

The Border Will Not Hold series, framed embroideries, took on a new dimension in light of Russia’s invasion of Ukraine. The embroideries explain how ideas of nationalism, bigotry and us versus them propaganda are weaponized by states, pitting people against each other. It’s a pattern that we know very well here in the United States and, of course, that happens around the world. Russia’s resumption of its place at the center of this scheme is just another inevitable turning point in history.

These pieces – each one Moldavian folk embroidery pattern pasted with Soviet era images taken from Cyrillic Alphabet Primers – explore how systemic repression, oppression, and revisionist propaganda can be masked in charming displays of folk traditions and materials. The books are filled with Soviet propaganda and, along with the alphabet, they are embedded with jingoist ideas, notions of who belongs, support for the militarized state, and how to be a “good Soviet.” Folk embroidery designs, while beautiful, have a much darker side. The shadows cast by the delicate embroidery work on the surface of the chiffon serve as a reminder to be wary of benign and overt ways in which the threat of nationalism is depicted.

How did you deal with the trauma inherited from your parents’ refugee experience?

The period when my mother became pregnant with me was extremely stressful. Because my mother and father sought to leave the Soviet Union as refugees, they lost their jobs and the waiting period could easily take a year. Her doctor advised her to gain only 15 pounds as there were no epidurals used in the USSR. She literally carried me inside her beyond the borders of the Soviet Union, enduring an unnecessary and botched C-section in an Italian hospital because there was no one to defend her. Adding to this stress, none of my grandparents wanted to join my parents in trying to seek asylum in the United States. They all immigrated to Israel instead, which was extremely painful for my mother who was incredibly close to her parents. I was born stateless in Rome while they waited.

The intense stress that my mother underwent left me with physical and psychological traits that are an imprint of my mother’s trauma. I have scoliosis – which does not run in my family – which required spinal fusion surgery. I am much shorter and shorter than the rest of my family and I have ADHD. Research has shown that there is often a link between ADHD and childhood trauma. The works in this exhibition are intended to convey to the visitor the difficulty of accessing buried memories due to trauma and how we carry these traumas in our bodies and pass them on to subsequent generations.

Your mother helped you sew several textile works on the show – how does sewing connect you, your mother and your grandmother?

Sewing, part of my practice, is done to honor my mother grandmother, a seamstress whose dreams were shattered by war; but it was also because she knew how to sew that she survived the war. We both learned to sew from her. Sewing these painstakingly detailed pieces with my mother is a strategy I found that helped us find a common space to consider what it means to be a refugee. My mother will never directly answer my questions about the past. I’ve found that in the hours we spend sewing and sitting together through silences, sharing the frustrations and rewards of intricate embroideries and large-scale pieces, it allows memories to bubble up and resurface. on the surface.

Tell us about “Unfolded Narratives,” a large-scale quilted tapestry from the exhibit created, in part, by students from Jewish day schools in Los Angeles.

During workshops held at AJU, I have led students from schools such as Milken Community School, De Toledo High School, and Shalhevet High School on a journey to discover their voices by exploring their own family stories of immigration , change and resilience. These stories travel the world from Iran to New York and have been expressed through collages, drawn images and narratives which have then been folded into playful paper fortune tellers. With my mother, I have transformed these small handcrafted sculptures into “unfolded stories”, which invite us to see how all our stories are linked and pieced together.

How does the work in the exhibition speak to the experience of a refugee who hastily gathered family artifacts before fleeing home?

“There were no roses there (echo)” is a wall rub of a traditional woven rug from Moldova. The surrounding wall is colored to mimic tobacco residue. It reflects the complex intersections of family traditions, domestic spaces, and the diverse ways in which issues of home and belonging radiate outward, nationally. The work, residue of a carpet, is a negative space — as if a wall carpet was removed, leaving behind the echo of its fibers. One could imagine that it is the residue of those who left as well as the shadow of the memories they carry within them.

There is an interactive audio guide in the show in which participants can walk around the AJU campus and encounter “blacklisted plant species”. What is the concept here and how does it relate to migration?

“Blacklisted: A Planted Allegory (Audio Guide)” explores the sociopolitical constructions of boundaries and belonging by challenging the scientific classification of plants as “native”, “non-native” or “invasive” species. Listeners are invited to encounter these plants on a choose-your-own-adventure-style audio tour or as a radio drama. This is an online field guide to familiarize listeners with non-native plants commonly found in California. Each plant is interpreted by an actor who anthropomorphizes it through a narrative, channeling its unique history and experience in arriving and settling here.

These are the stories of generations of migrants. What these plants offer us reflects a landscape that is as much cultural as it is botanical, ranging from humble weeds to deliberate landscaping. The experience aims to familiarize the public with these plants to better understand how the landscape is not just botanical but historical and cultural – the result of human settlement. The listener can experience plants as a reflection of people, of history, see how they are part of this narrative, and engage with the often controversial but nonetheless important issues of colonization, migration, borders, citizenship, belonging and otherness.