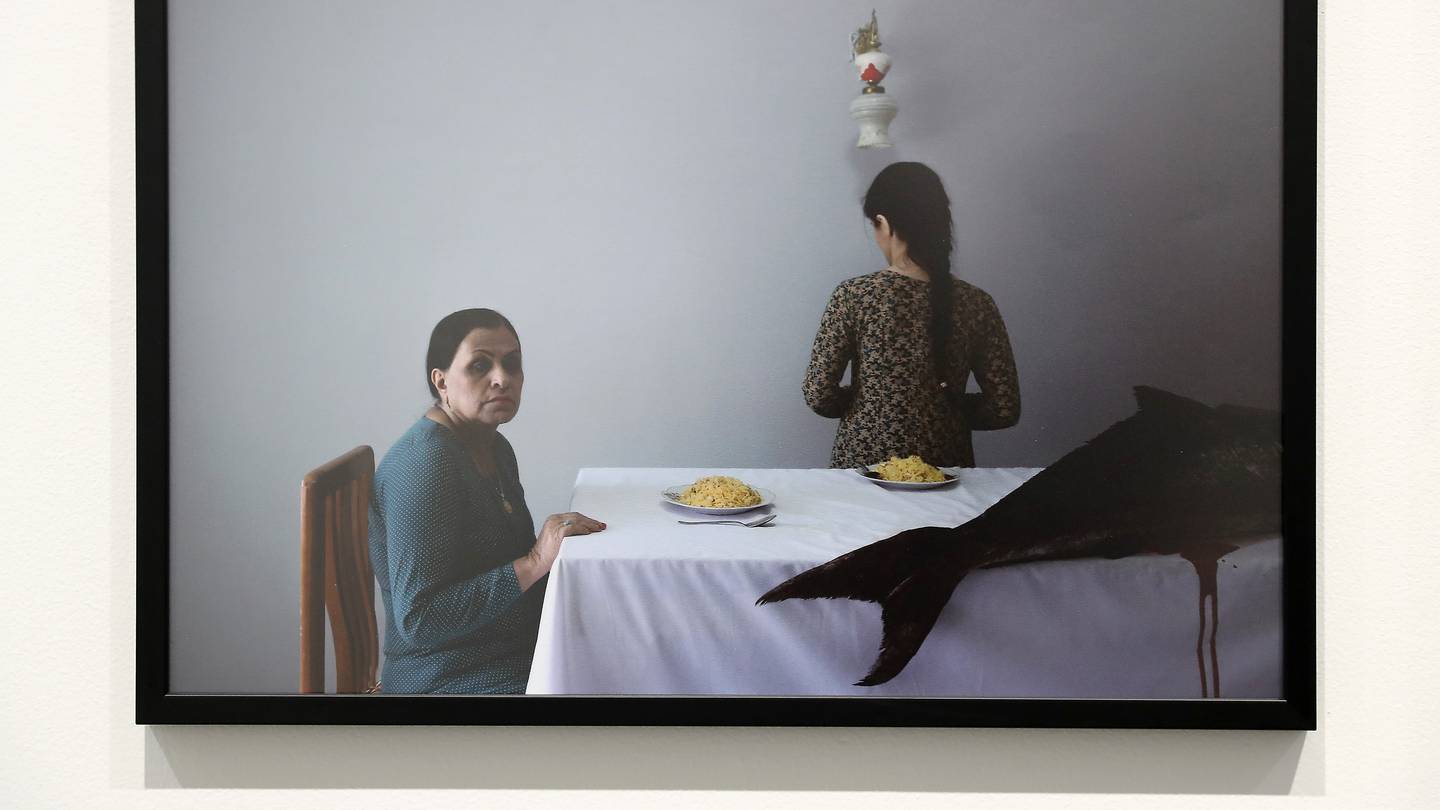 The eponymous subject of Morteza Niknahad’s photographic series Big fish is the embodiment of a recurring and life-changing nightmare of the Iranian photographer’s mother in the mid-1990s, when he was a child.

In the disturbing dream, a dreadful, fast-growing creature was chasing her, trying to kill her. The experience wouldn’t have been so powerful if it hadn’t been repeated almost every night. Niknahad’s mother woke up in fear and panic, but was silent about what she saw. Around the same time, doctors diagnosed him with an unidentified illness which they said was of spiritual origin.

It wasn’t until a decade later that Niknahad’s mother felt she could tell him the details of her bad dream. By then, Niknahad had already grown accustomed to seeing his shadow.

In one photograph, the large, glittering fish – out of water but still alive – is slumped next to a distressed-looking bride, her attention somewhere in the distance.

Another photograph shows the fish on a table, its blood seeping onto the freshly ironed white tablecloth. There is food on the table. Niknahad’s mother fixes the viewer with a gaze similar to that of the bride.

In yet another image, the family pose for a classic, if somewhat downcast, portrait with the fish lying on its side at their feet.

Niknahad Big fish The series was named as one of four finalists in this year’s Vantage Point Sharjah photography competition and is on view until December 11 in an exhibition organized by the Sharjah Art Foundation. Niknahad said the series attempted to visually represent how much her mother’s dream weighed on her and her family. What life was like with a “creature now subdued and damaged”.

“About 24 years ago, when I was about 13, my mother had a dream. It changed our lives,” Niknahad said at the exhibition’s opening ceremony.

“A monster kept following her and tried to kill her. She woke up every night to get away from it. She said if she was caught she would die and lose us forever. We’ve been living with it ever since. It changed our perspective on everything.

At first, Niknahad said he was reluctant to share his mother’s dream through Big fish. The family did not know how people in their community would react. Her mother, Niknahad said, had been through enough.

“She lost three sisters as a child as well as her brother afterwards,” he said. “Throughout her life, she lost people around her one after another.

“My parents also wanted a divorce when I was young, but my mother decided to keep the marriage for the sake of her children. I was the only one who saw the pain she was going through. It was always a question for me to know if I could be a part of this and help him.

What convinced Niknahad to tell her mother’s story were her own experiences with depression. During his therapy, the photographer had seen how much talking could help someone get better.

“I wanted to see if it would work with my mom too,” he said. “If it could help her defeat this monster that has been following her for all these years.”

It took a few years, but Niknahad’s mother finally decided to share her story through Big fish, and the dream began to cast a less horrible shadow over his life.

“It’s true that our history may be a bit dark but I’m sure there are a lot of people who can relate,” he said.

Big fish was selected as a finalist among works by 66 artists. The photographer who won the top prize was Md Fazla Rabbi Fatiq, while the other three finalists were Hady Barry, Kirti Kumari and Neec Nonso.

The open call invited works that showcase visual storytelling and the art form‘s ability to capture social realities from many angles. The foundation said it received more than 450 applications.

Ziaul Huque’s ‘Sins of Human II’ is one of the works on display at Vantage Point Sharjah 10. All photos: Sharjah Art Foundation