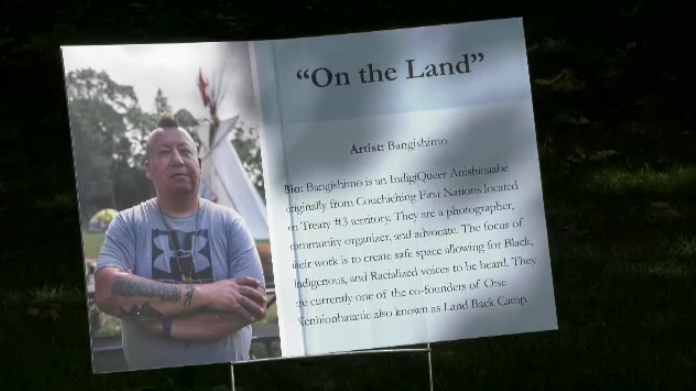 The City of Kitchener announced Bangishimo Johnston as the 2022 Artist in Residence earlier this month. Bangishimo is an IndigiQueer Anishianaabe from Couchiching First Nation located in Treaty #3 territory. In addition to being artists and photographers, they are community organizers and advocates for the inclusion of Black, Indigenous and racialized voices.

“A lot of our stories are still trauma-driven and I want to take us away from that narrative of always being in the past and into the present and the future,” Bangishimo said. “I want the community to know, which is the message of Land Back Camp, that we have always fought for a space to come together, to come together, for a space to make our voices heard.”

THE POWER BEHIND THE PORTRAITS

This year, the city partnered with Textile Magazine for its annual Artist-in-Residence program, which supports innovation and excellence in the arts. As part of the residency, Bangishimo plans to produce a series of photographic portraits that engage local Indigenous, racialized and Black communities.

“Being a queer Indigenous person has given me the opportunity to use my camera as a tool to amplify the voices of others. »

The project, named “The Medicines We Carry”, includes six to eight portraits that will be presented in a public exhibition. Bangishimo’s goal is to create space for indigenous voices to be heard.

“Representation is important, especially with the work I’ve done over the years. I saw very few Indigenous photographers growing up, very few visible Indigenous artists who contributed to the work I do today. Create a space for mentorship and support for these young Indigenous youth.

WHERE IT ALL STARTED

Victoria Park in Kitchener is an important landmark for Land Back Camp. The park is where members of the O:se Kenhionhata:tie Land Back Camp first gathered on National Indigenous Peoples Day in 2020. The gathering was focused on solidarity, celebration and promotion reconciliation action in the Waterloo region.

“We had this queer Indigenous space that we created,” Bangishimo said. “We created this family in the middle of a park. Something that was originally supposed to be three days in the park, we are now in 2022, two years later and we now have over 30 people who are part of Land Back Camp.”

The group still gathers occasionally at the park. One of Land Back Camp’s current goals is to change the name of Victoria Park to its original name, Willow River Park.

“We felt it was important to start referencing Victoria Park from its colonial name to Willow River Park, which is more appropriate,” Bangishimo said. “We’ve always said we don’t need to ask permission from people in power, we can just do it and people have supported the momentum.”

Bangishimo and Amy Smoke, co-founders of O:se Kenhionhata:tie Land Back Camp, called on the Region of Waterloo, the City of Waterloo and the City of Kitchener to take action on the 94 Calls to Action of the Truth and Reconciliation Commission. The next steps for Land Back Camp were the creation of four of its own calls to action.

• Access to the land for ceremonial and assembly purposes

The Queen Victoria statue in the park has been vandalized and sprayed with red paint numerous times, and Bangishimo would love to see and hear more talk about colonial figures from the past.

“Moving forward, if we’re going to talk about reconciliation at city and regional levels, then we have to start talking about these colonial figures that exist,” they said. “It’s really hard to sit here and get together once a month with our young people when there’s literally this colonial statue towering over us just across the creek.”

Bangishimo Johnston plans to collaborate with Textile Magazine and other members of the community to organize workshops and related activities in the future.