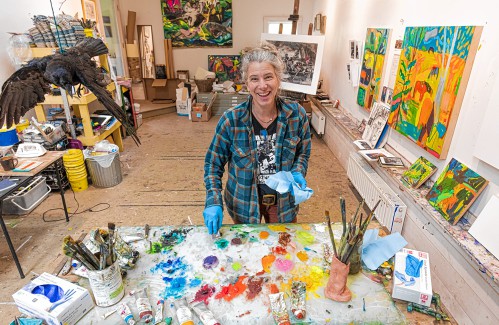 Northampton, Easthampton and Amherst could grab headlines when it comes to the area’s arts scene, given the number of artists in these towns, the presence of the Five Colleges and performance venues such as the Academy of Music .

But as the artists of the Hilltowns might say, “Don’t forget us”.

This weekend, some of those artists offer a sharp reminder, with 18 art makers in six cities opening the doors to their studio showcase the work of a total of 23 artists. An art fair in Cummington, wine tasting in Southampton and a 10th anniversary celebration of The Old Creamery Co-op in Cummington will also be on the programme, which will be marked by food and music.

The Hilltown Arts Alliance and the Hilltown Community Development Corp. have joined forces to sponsor the events from September 30 to October 2, both as a way to highlight the vitality of the arts and small businesses in their communities and to mark something “of a return to normality, as one organizer put it, after COVID-19 disrupted things for the past two years.

“There’s a lot of new energy this year,” said Kathy Ford, a textile artist and president of the Hilltown Arts Alliance. “We have wonderful artists participating (in open studios) and then all the other events going on…and we’re looking at new opportunities for the arts (in the Hilltowns) to come.”

As Hilltown CDC director Dave Christopolis notes, Cummington is set to receive designation as a cultural district of Massachusetts, which should pave the way for grants that can be used to create more studio space and other installations in town, in particular by renovating the old primary school which closed several years ago.

“It can be a bit difficult to define this region,” Christopolis said. “We are between the Berkshires, which are very well known, and the Northampton-Amherst area and the colleges. But we have over 300 local businesses, we have a pretty vibrant arts community, and we’re looking to leverage that and give artists more tools to market their work.

Christopolis said the Hilltown CDC is also helping restore other venerable buildings in the area for artists to use; meanwhile, he noted, two new restaurants, The Goldenrod Country Inn and Liston’s Bar & Grill, have opened in older Worthington spaces (Liston’s officially reopens October 1 under new ownership).

The Hilltown Arts Alliance, a nonprofit group that supports area artists, began the Open Studios Tour in June 2018, and Ford said attendance that year and in 2019 was good, given that it was a new event.

Then the pandemic shut it down in 2020; last year it was moved to early October and maintained with COVID protocols such as masks, “and the response has been quite strong,” she said. “I think people were so happy to go out and do something.”

This year’s tour, taking place October 1 and 2 from 11 a.m. to 5 p.m. on both days, will cover studios in six communities: Plainfield, North Chester, Worthington, Huntington, Chesterfield and Cummington. Artists include painters, sculptors, fabric and jewelry makers, printmakers and ceramists; 23 artists are included, some sharing their work in the studios of others.

A number of live demonstrations and other events are scheduled in the artists’ studios. Chesterfield painter Valerie Claff, for example, will paint a start-to-finish watercolor on October 1, starting at 1:30 p.m., and famed potter Mark Shapiro from Worthington will make a teapot in an hour, starting at 3:30 p.m. on October 1.

“Meeting people and sharing some of your work with them is really a treat,” said Ward, also from Worthington; she will be demonstrating some of her quilt-making techniques in her studio at 11:30 a.m. on October 2.

To prepare the ground for the studio visit, The Art Fair, a regular program in the Valley in which a small group of artists and designers discuss their work in an informal setting, will take place at the Cummington Community House at 6.30pm tonight (Friday 30 September). Prior to this, an art walk through the city’s cultural quarter is offered at 5:30 p.m. and a dance performance will be performed outside the Community House at 6 p.m.

Ward says open studio tours in the Hilltowns, to some extent, build on the legacy of the Cummington School of the Arts, a summer program that began in the 1920s and continued through at the end of the 20th century, with various performances and residencies for a range of artists. Some notable names, such as painters Helen Frankenthaler and Willem de Kooning and photographer Diane Arbus, have spent time there.

“There really is a rich tradition here, especially of artists from the cities finding a new home in the country,” said Ward, who previously worked as an architect in New York and then Amherst.

She notes that Hilltowns potters, including Mark Shapiro, have also been hosting a tour of their studios for years.

Events in the Hilltowns this weekend include tastings at the Sena Farm Brewery in Worthington, including the unveiling of a new beer, The Artist’s Palate, flavored with local raspberries; the celebration of the Old Creamery Co-op, October 1 from 5:00 p.m. to 7:30 p.m. at Pettingill Memorial Park in Cummington; and a wine tasting at Glendale Ridge Vineyard in Southampton on October 2 from 4:00 p.m. to 6:00 p.m.

More information on all of these events, including a map of participating artists’ studios and restaurants, is available at hilltownartsalliance.org.

Steve Pfarrer can be contacted at [email protected]

The Old Mill Inn, a historic Dallas landmark, is back open for the State Fair of Texas

Meet the artist behind the Alberta Portrait Project! - StrathmoreNow.com