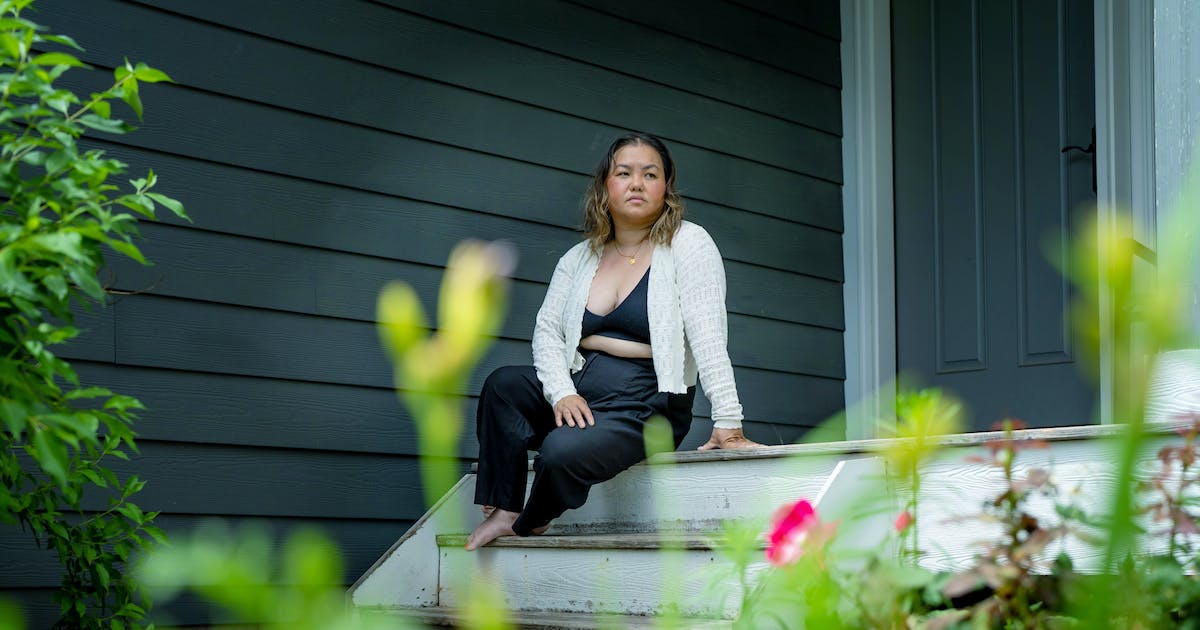 Artist Pao Houa Her was a toddler in the mid-80s when she first saw a white man charging through the jungle in a movie. She was in an outdoor theater in a refugee camp in Thailand.

“It was the movie ‘Rambo’ where he was asked to go to Vietnam to save people, and I remember thinking that it was not a movie but a real documentary about this guy,” said Her, 40 years old, during a lunch at Hmongtown. Marketplace in St. Paul, where four of his lightbox photos, including one of fake flowers in a dark restaurant, hang in the dining room.

She, the first Hmong American to receive an MFA from Yale University, grew up on St. Paul’s East Side after his family fled northern Laos for the United States. His work revolves around the American Hmong experience, mixing fiction and documentary, staging and naturalness. She is fascinated and constantly discovers new ripples within her diasporic community, but also critical of it.

On Thursday, she opens “Paj qaum ntuj/ Flowers of the Sky” at the Walker Art Center. This is his first solo exhibition at the institution and a fitting follow-up to his inclusion in this year’s prestigious 80e Whitney Biennial in New York, where six bodies of works are exhibited at different times until September 5. Her work is also shown internationally and she is represented by the Bockley Gallery.

She shot her new series of 16 color prints, seven black-and-white light boxes and a two-channel video in rural Mount Shasta, Northern California. Many Hmong American farmers migrate there seasonally to capitalize on the legal cultivation of marijuana, part of California’s “green rush” echoing the gold rush of the mid-1800s.

“Pao has this unique ability to evoke a certain longing and nostalgia for land and language that speaks to the American Hmong imagination, but also to the collective imagination of many other immigrant communities in the United States. United,” Walker curator Victoria Sung said.

The title of the exhibition, pronounced “paah kohm duu”, translates to “flowers of the sky”, a Hmong expression that refers to the cultivation of marijuana. His photos play on commercial advertising imagery and call to mind Ansel Adams’ romanticized images of the West, while simultaneously subverting those tropes.

Her work is generally inspired by facets of the Hmong American experience that she discovers along the way. Her 2015 “Attention” series, portraits of Hmong veterans who fought in the “secret war” in Laos but were not recognized by the US government, came about after she saw a group vets at a funeral.

The 2016 series “My Mother’s Flowers” stems from the fake flowers she noticed in her parents’ house and on Hmong dating site profiles where Hmong American men are looking for “pure” Lao women to marry. His 2017 series “My Grandfather Turned into a Tiger” stems from family folklore and a trip to Laos and Thailand.

“I remember eating ice cream and throwing away the cone because I didn’t know you could eat it,” Her said. “Or learning to eat with a fork at school. I had never seen a fork in my entire life. … I think of [those memories] a lot when I do photography because photography is such an American thing.”

The CIA recruited Hmong people, indigenous to southwest China, Vietnam, Laos, Thailand and Myanmar, to fight North Vietnamese communists in the “Secret War”. When the United States withdrew from Vietnam in 1973, the Hmong fled, although many still live in the jungles of Laos, forgotten by America. Thousands of people came to the United States, many of them settling in California, Minnesota and Wisconsin. His family was among them.

Her father, Nenghou Her, is a retired factory worker who now spends his days tending chickens and gardening. Her mother, Mao Lee, works as a childminder.

She, the eldest of seven children, taught at Macalester College and will become an assistant professor of photography and moving images at the University of Minnesota this fall.

She was expelled from two high schools for truancy, but eventually graduated with a GED and earned a BFA from Minneapolis College of Art and Design.

Professor David Goldes met her when she was a sophomore. He and the other students were immediately struck by Her’s photos of his family members standing between hanging plastic sheets at his in-laws’ home.

“These photos marked the beginning of his long exploration of this displaced Hmong indigenous group,” Goldes said. “She started with her family.”

At Yale, Her, Richard Choi, and Tommy Kha were the only Asian Americans in the photography department. They formed a tightly knit group and maintain a common thread to this day.

Kha described her as a big sister.

“Pao’s photos were very familiar…full of people who looked like me and it was pretty drastic,” Kha said. “Seeing this was so normal for us, but also so impactful and not very understood by our classmates, who didn’t know what it meant to be an immigrant or to have conversations about fleeing countries because of war, border conflicts, military… or what it was like to be first or second generation.”

She describes herself as “not the best student, and sometimes not the best person” in high school, but she has always loved photography.

When she saw Duluth-born Chinese-American photographer Wing Young Huie’s “Frogtown” series in 2005, documenting the St. Paul neighborhood that is home to many Southeast Asian immigrants, she finally saw her community represented.

On a hot summer afternoon in June, she sat on the carpet in her home office in Blaine flipping through photo books while her nephew Vince, 6, sketched on an iPad and her niece Kaylee , 7, dozed on the couch as TV cartoons blared.

Her most prized photobook contains a 2008 series by photographer Deana Lawson, who shoots intimate photos of black communities, similar to those Her creates with Hmong communities. It was a gift from Her’s late husband, Ya Yang, who died of a brain hemorrhage in March 2021.

“Deana does these kinds of family portraits that look like they could be in any family album and challenge what stereotypical images of African Americans might look like,” she said.

Yang, whom she married at 20 and had known since middle school, has always been supportive of her photography dreams.

When Yang died, the children “saved her”, she said, especially on the days she couldn’t get up.

“Vince always tells me he doesn’t like it when I cry. He’ll ask me, ‘Why are you crying?'” she said, as tears welled up in her eyes. “He likes to be with me all the time.”

His new job is set in Northern California. The photos lack people.

“In the photos, you see the traces of human activity, and how that kind of blends in with the landscape,” Sung said. “The images are these austere landscape photographs, but when you look closer you will see a pipe or a net – small traces [of humanity].”

Pao Houa Her: “Paj qaum ntuj / Flowers of the sky”