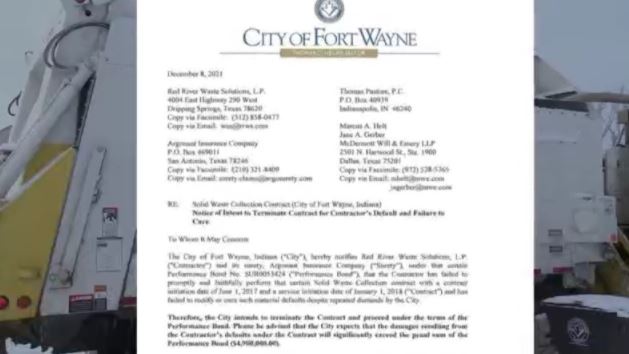 FORT WAYNE, Ind. (WANE) – With Red River Waste Solutions – and the contracts it has with cities for garbage collection – stalled in bankruptcy court, the City of Fort Wayne is making it clear it wants to terminate its contract. .

In a letter dated December 8, obtained by 15 Finds Out, the city describes the seven areas in which Red River is in breach of contract:

The letter states that due to Red River’s inability to correct “material defects despite repeated requests from the City”, the latter “intends to terminate the contract and proceed under the terms of the ‘execution. Please note that the City expects damage resulting from [Red River’s] defaults under the contract will significantly exceed the penalty sum of the performance bond ($4,900,000).

The letter outlines Red River’s missed collections since the start of the contract on January 1, 2018. According to the contract, no more than one miss per 1,000 households is permitted. That’s 83 misses allowed each month. The city’s letter points out that Red River missed that 26 times in some months, and while improvements were made, they were inconsistent. April 2021 saw more than eight times the number of misses allowed. The letter also noted that the numbers are more favorable to Red River than its actual performance because they’re based on residents calling to report misses and not everyone calling every time their trash is missed.

15 Finds Out also asked the city for clarification on exactly how misses are counted. Spokesman John Perlich explained that Fort Wayne has always issued fines based on the number of missed calls, not the total number of homes.

“For example, if a person calls on the street and five houses in total have been missed, it is a $100 penalty if they exceed the benchmark for the week. If we were to fine $100 per missed house and not per call, the contractor would basically have to pay the City to pick up the trash because he would be fined so high. Our cost per house per week for the only aspect of garbage collection that we pay for in Red River is approximately $1.20 per house. To fine them $100 for that house when they only get paid $1.20 is extreme. Especially when they come back and pick up the houses the next day,” Perlich explained in an email.

Red River filed for bankruptcy in October in federal court in Texas, where it is based.

“Once a company files for Chapter 11 bankruptcy, an automatic stay is triggered and it’s a trickle wide. So that means all future collection proceedings are on hold and that way the city can’t really terminate its contract at this time because it’s constrained by the rules and processes of the bankruptcy court,” explained corporate lawyer Apexa Patel.

If Red River wants to keep its contract with Fort Wayne, it will have to pay all outstanding fines.

“He will have to pay all prior penalties, bankruptcy costs and everything that has been assessed. Additionally, they must provide assurances for future performance,” Patel said. “If they reject the contract, then it’s deemed breached and that means if the city has any actions against Red River, they could just sue in the regular Allen County courts and not in the bankruptcy courts, because a once it is rejected, it is deemed to be rejected before the bankruptcy.”

Red River’s choice to keep or reject the contract would still have to be approved by a bankruptcy judge.

Red River and its bond must post a new bond of $4.9 million for garbage collection and $2.4 million for recycling by January 1, 2022. Red River has previously indicated that it will not be able to pay this bond.

“The performance bond is where a third party guarantees services and performance payment for Red River. This third party is called a surety,” Patel said. “If they don’t pay by January 1, I suspect the court would have a hard time agreeing to let Red River take over the contract because they need to be able to pay their past debts and provide future insurance, and the bond execution is part of it. »

Bail is asking a judge to force Red River to decide whether to uphold or reject Fort Wayne’s contract. A hearing for this motion was scheduled for Thursday morning, but was postponed. This is the second time the hearing has been delayed. It was originally scheduled for Monday. A new hearing date has not been released.

In reference to the letter “Notice of Intent to Terminate Contract for Contractor Default and Failure to Remedy” sent on December 8, 2021, the City of Fort Wayne sent WANE 15 the following statement:

The City of Fort Wayne has not terminated its contract with Red River. The City remains focused on providing residents with reliable and efficient waste collection services and is working diligently to ensure this happens regardless of the outcome of Red River’s bankruptcy filing. Residents can continue to expect to receive services. Nothing has changed. The City simply took steps that were previously discussed to preserve its rights under the performance bonds posted by Red River. Bonds are required under Red River’s waste removal and recycling contracts with the City. The City did not ask Red River to discontinue or reduce its services and it did not.

15 Finds Out also discovered that Fort Wayne saved millions of dollars by choosing Red River over Republic Services for the waste contract. When the decision was made in 2017, Republic was the garbage collection provider, but Red River’s bid for the contract starting in 2018 was the lowest. State law requires that the lowest and most responsive bidder be awarded the contract. At the time, Red River had just extended a contract with Nashville, TN, where the company served over 90,000 homes. The Fort Wayne contract is for 83,300 homes.

“The contract was reviewed by the City Administration/Public Works Division and unanimously approved by City Council,” Perlich said in an email. “Republic’s bid to serve residents in 2018 was more than $2.1 million higher than Red River’s annual bid for garbage and recycling collection combined. We’ve saved over $9.2 million in four years by choosing Red River over Republic.