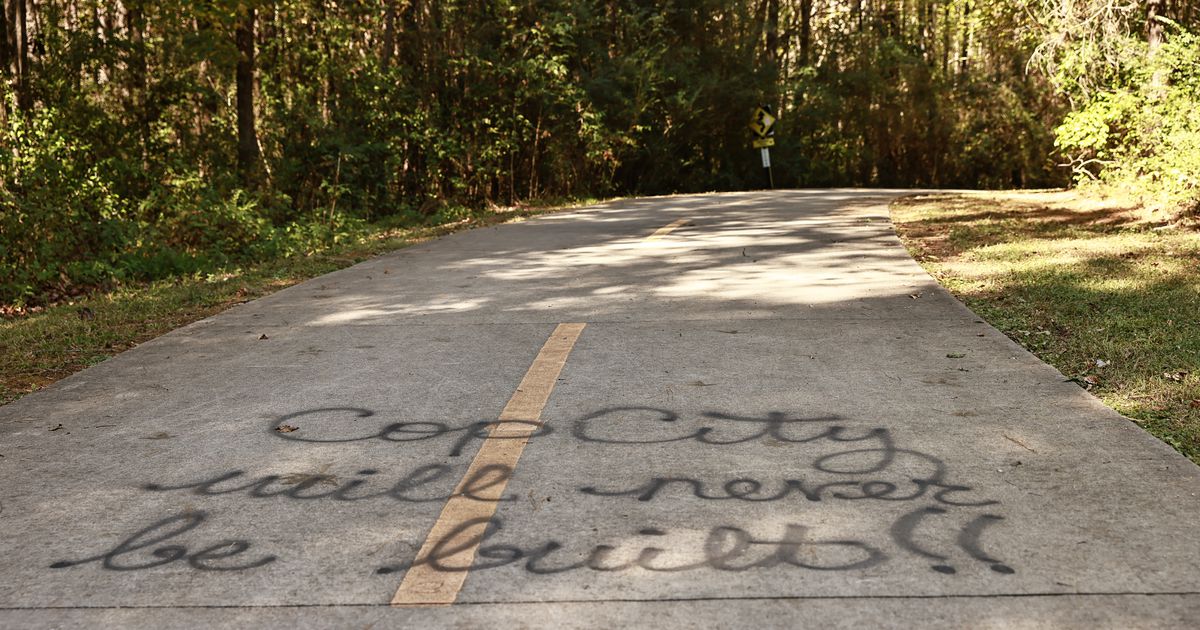 Both near and far, the shot sowed seeds of intrigue, violence, and much more emotion.

In the year since the proposal was passed by city council, despite hours of generally negative public comment, “forest defenders” have made the woods their home. They have sworn to protect it from destruction by whatever measures they deem necessary – tactics that have taken the form of vandalism, sabotage and the throwing of Molotov cocktails.

But just calling the huge expanse of trees and wildlife a “forest” paints the picture of pristine, undisturbed land. The truth is that the forest is part nature reserve and part dumping ground, exposed for decades to more than its fair share of industrial pollution.

So Largess had to see it himself.

He came away impressed enough with the deer, dragonflies, tulip poplars, and loblolly pines that he plans to return on Thanksgiving and embark on further documentation of the offerings of the forest. There is still a lot to learn.

For Twig and, perhaps, everyone.

This property was Native American land, a plantation, a prison farm. It’s a shooting range and, for decades, an illicit dumping ground.

Thousands of tires, abandoned there by businesses and local residents, were recently removed from the site. The streams that flow through the property are tributaries of the South River, which has often been mentioned among the most polluted waterways in the country.

The forest is a complicated, sometimes contradictory place.

“I promise you when they start digging through the current site plan, they’ll find things,” DeKalb County Commissioner Ted Terry said. “It’s hard to believe there’s nothing more to the story.”

“It would have aggravating environmental impacts on the local community,” Atlantan Mark Hall said of the proposed training facility. “And I think it’s a continuation of this unjust tradition of powerful people deciding everyone else’s fate.”

Hall and other activists have warned that cutting down trees and adding concrete to the area could, among other things, fuel erosion and stormwater problems and make Atlanta even more of an island of urban heat.

The forest in question is, today, flanked on its eastern and northern facades by bourgeois neighborhoods with a black majority. Further industrial uses and the Metro Regional Youth Detention Center are to the south.

Before all that, it was Muscogee Creek land (activists renamed the property Weelaunee, using that people’s name for the forest). It was later a plantation run by George Key, who owned at least 19 slaves and is still the namesake of a nearby road.

The exact details get a little murky from there.

But in 1920, the Atlanta City Council – perhaps inspired by a larger federal operation in the same area – voted to move some local prisoners to the city’s existing dairy, forcing them to create products that fed them. and were sold to the public. The prison farm operated until at least 1989 and has since been largely abandoned.

There are no official trails on the property, which was made a public park as recently as 2017, but curious locals have explored the property for years, either with unofficial guided tours or by them. themselves. The dilapidated, graffiti-covered buildings of the former prison farmhouse have also attracted interest from amateur photographers and the film industry.

The same goes for the abandoned stone remains of the Carnegie Library in Atlanta, which still lie abandoned in the forest.

In late 2021, Terracon, an engineering and science consulting firm hired by the Atlanta Police Foundation, acquired and analyzed 30 soil samples and three groundwater samples from the development portion of the site. Documents show the test sites were mostly along the utility company easement on the east end of the property and around dilapidated buildings to the north.

They found no potential contamination that exceeded the standards set by the Georgia Environmental Protection Division and did not recommend further environmental testing.

At the same time, the company wrote in its report that “the scope of services was not intended to identify all chemicals possibly associated with the site.”

More than anything, activists oppose the training center in general, which they see as Atlanta doubling down on police militarization and tactics that disproportionately affect people of color.

But the tests have also been targeted by some activists and advocates, who say there’s no way a property has likely seen decades of industrial-grade pesticides and potentially contains human remains (not to mention rumors of long standing of dead animals from Zoo Atlanta buried there.) suitable for development.

“APD and the City of Atlanta have deliberately chosen to place this facility on polluted land, in (a) jurisdiction where local laws allow a government to come in and build whatever they want,” the lt tweeted. Atlanta Community Press Collective earlier this month.

The property is in DeKalb County but is owned by the city, which means normal zoning procedures are not required. While the county administration must approve the necessary permits for construction, the DeKalb commissioners have no say in approving or rejecting the proposed development.

A woman named Lily Ponitz was ousted from the project’s community stakeholder advisory board earlier this year after she gave media interviews – and published her own opinion piece – questioning the rigor of the assessment.

Terry, the DeKalb commissioner who appointed Ponitz to the committee, also lobbied for the county to request more thorough environmental assessments on the property.

He recently withdrew that proposal, citing a lack of consensus on the issue. But Terry says he hopes to find support for a similar initiative targeting the part of the training center property that will remain undeveloped.

“I think it’s important to remember that there are other parts of this forest that won’t be affected by” development, said Michael O’Reilly, director of climate policy and strategy at Nature. Conservancy of Georgia.

“For us it’s about thinking about how do we move forward, how can we actually start to make that a reality.”

In addition to building facilities for public use, police foundation leaders have suggested that pathways and other amenities be added to parts of the undeveloped green space.

The city and police foundation, meanwhile, recently removed about 75 tons of illegally dumped tires from the entire property.

Marshall Freeman, APF’s chief operating officer, told a recent stakeholder committee meeting that it was “very expensive”, but it was part of their effort to “be good neighbours”.

They hope to do another type of cleanup soon.

Dozens of activists have been arrested in recent months and Atlanta police have confirmed a “multi-jurisdictional investigation” into alleged crimes at the training center site and beyond. DPA Deputy Chief Carven Tyus said at the recent stakeholder meeting that the department believes “the courts are going to help us in the near future to weed out the criminal element that’s there.”

That would please Jacqueline Echols. At least in some way.

The director of the environmental group South River Watershed Alliance said last month that the “meaningless clashes” of the most extreme activists divert attention from the mission.

The new gallery at Wexford Arts Center will be named after professor, author, artist and historian Dr Billy Colfer