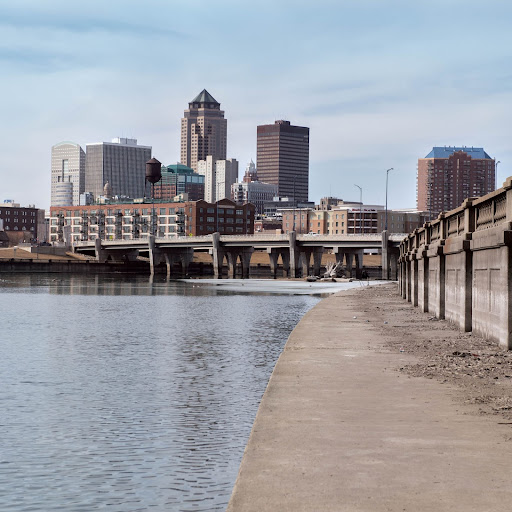 A view near where the Des Moines and Raccoon Rivers converge at the Scott Avenue Bridge in downtown Des Moines. Photo by Duane Tinkey

The Des Moines area metropolitan planning organization has received an on-budget bid for the Scott Avenue Dam portion of the ICON Water Trails project. The executives will start moving forward with the next steps towards preparing a possible contract which will be voted on at a special meeting, possibly as early as next week.

The Iowa DOT opened the bid submitted by United Contractors and Reilly Construction on Tuesday. The $40.9 million bid came in under the engineer’s estimate of $43 million, and DFO officials will work with DOT and the Federal Highway Administration on drafting a potential contract.

Bob Andeweg, Chairman of the Board of MPO and Mayor of Urbandale, said MPO officials and their partners at ICON Water Trails, City of Des Moines, Polk County, Iowa DOT and at the federal level are excited to begin moving forward with the largest project in the plan’s first phase that connects more than 80 sites along 150 miles of rivers and streams in central Iowa.

“If it had been easy to do, it would have been done years ago,” Andeweg said in a statement provided to Business Record. “But with thoughtful planning, perseverance and the generosity of donors and granting agencies, we can create the network of water trails our region has long envisioned.

The $125 million initiative is being funded through a combination of campaign capital and public funds, including a $25 million BUILD grant.

Receiving an under-budget bid is the latest step in a plan that began with the approval of the Greater Des Moines Water Trails and Greenways Master Plan in 2016 and an engineering review in 2018.

The Federal Highway Administration awarded a $25 million BUILD grant for ICON Water Trails, but after one round of bidding drew no bids and a second drew only one which was also over budget, the scope of the grant agreement had to be revised.

Under a revised plan, the grant will cover improvements to Scott Avenue, which aims to create a safer and friendlier area for activities ranging from kayaking to fishing. The grant will also cover a Harriet Street access site. Further work included in the initial grant agreement will be carried out under the new phased approach announced earlier this year.

The work covered by the building grant will be tendered in three parts. The first was the in-water features of Scott Avenue, including the mitigation of the low-head dam and the introduction of whitewater features. If a contract is awarded, work could begin next year.

Separate bids will take place over the next two years for land improvements and access improvements near Harriett Street, a statement said.