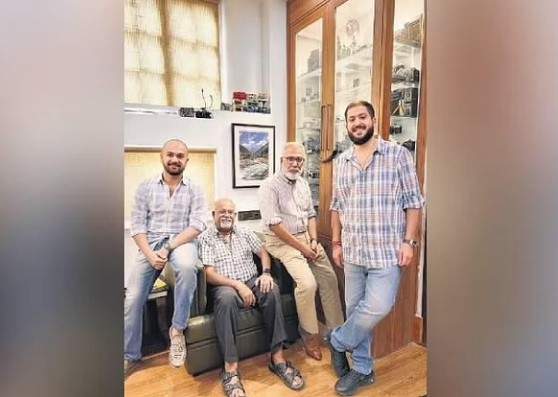 When you enter Mahatta & Co’s studio, located in Block M, Connaught Place (CP), the first thing you see is probably a large black and white photograph. This image – it was clicked in the early 1940s – shows a queue of British citizens queuing outside the Mahatta & Co. Srinagar store, each carrying a camera. The story behind this photograph is equally interesting. It was clicked during World War II, a time when the Mahatta family had to enforce wartime film rationing – an individual could only buy one roll of film, often loaded into his studio camera – in order to avoid hoarding and black marketing. of these products. “This photo is very special to me. It shows Britons lined up in front of an Indian settlement at a time when they were also destroying our country,” says Arjun Mahatta, a fourth-generation photographer at Mahatta Photographers, an establishment whose heritage dates back 107 years.

The Mahattas, and in particular their studio, have witnessed several historical accounts. Having withstood the tides of time, one of India’s oldest studios still stands strong.

Continuing a Legacy
In the early decades of the 20th century, Amar Nath Mehta, a young boy from the Gurdaspur district of Punjab (undivided), fled his hometown and moved to Dalhousie, Himachal Pradesh – his maternal grandparents resided here. It was a quarrel with relatives that cost his parents their lives. After moving to the colonial hill station, Mehta had the chance to experiment with a camera with the help of military professionals residing nearby. Photography was slowly taking hold in the sub-continent and Mehta had found his accompaniment.

In a few years, the self-taught photographer moved to Srinagar. Here, on a barge in the Jhelum River, the first settlement of the Mahatta – an anglicized version of Mehta – began. After decades of working from Kashmir and later in cities such as Rawalpindi, Sialkot and Murree (all in Pakistan), this family played a central role in documenting the history of the country, especially the valley. They were also the royal photographers of Raja Hari Singh, the last ruling maharaja of the princely state of Jammu and Kashmir. One can only imagine how well their studio has documented the length and breadth of Kashmir. This story was chronicled in Picturing a Century: Mahatta Studio and the History of Indian Photography, 1915-2015, an archival book published by the family for the studio’s centenary (2015).

“It was a good time for the Mahattas,” comments Pavan Mahatta, Madan Mahatta’a’s son, as he shows us the book. “Any time is a good time,” laughs Arjun. A portrait of Amar Nath Mehta is framed near the desk. On the other side, a small assortment of Pavan’s collection of 900 cameras is displayed in a glass display case.

Years of archiving and documentation
By 1948, Mahattas had set up his Connaught Place studio, in the same location where it stands today. After Amar Nath Mehta, it was Madan Mahatta, a pioneer in architectural photography, who took his business forward. Madan has extensively documented the urbanization of New Delhi. He also introduced negative-to-positive color printing – a craft he had learned in Surrey, England – making Mahatta & Co the first studio to do so in India. His office is filled with negatives (of photographs clicked by Madan) most of which are documentation of the several decades that have passed.

Along with industrial photographs, wedding photography was central to the studio work of the Mahattas in Delhi. An unforgettable portrait of famous actor-director Raj Kapoor, playing the dholak [Indian hand drum], is still well preserved in their archives. “It was said that kisi ladki ki shaadi na hui hoti toh se photo khichwao of Mahatta, ho jayegi [if marriage is not on the cards for a girl, get a picture clicked by the Mahatmas and it will happen]says Pavan. “A lot of people come to us and say ‘Humari shaadi ki photos aapke studio me khichi gayi thi [our wedding photographs have been clicked at your studio]’. In this way, we photographed generations of the same family,” adds Arjun.

The third generation – Pavan with his brother Pankaj Mahatta – and the fourth generation – Arjun and Sanaj – still maintain the same devotion to the art of photography. “I was very clear from the start that I didn’t want it to end with Gen 3, I wanted it to go further,” Arjun shares.

Change of hours
The impact of technology has been harsh on the photography industry. Several studios have closed, unable to maintain their activity. In 2015, the Mahattas also closed their outlet. “Customers would spend hours looking at cameras and when it came time to pay, they would say it’s available cheaper on Amazon,” Arjun shares, explaining how physical stores can’t compete with e-commerce platforms.

However, evolving with the times has been the basic principle of the Mahattas. “You have to change with the times. I think you can’t wait for people to come and see you, you’ll have to go,” says Arjun. From weddings to products, fashion and more, the Mahattas do it all.

The family, especially Pavan, accumulate memories. You’ll find stacks of albums in their office since every family trip turns into a photo album. “The print survives!” concludes Pavan, showing us the photo book created after their recent trip to Kashmir.