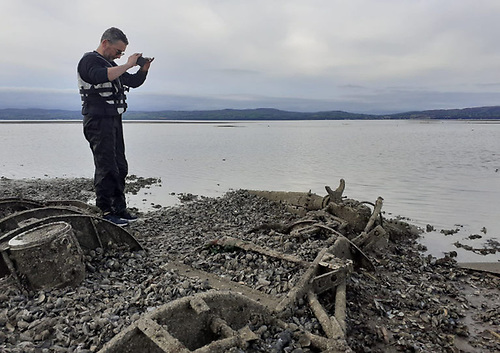 The crash site of a rare Royal Navy helicopter lost in 1958 has been discovered as part of a scientific survey of the Northern Ireland coast.

Remains of the plane were first spotted in aerial photos of Lough Foyle as part of the Northern Ireland 3D Coastal Survey, commissioned by the Department for Agriculture, Environment and Business (DAERA) of NI.

But it was a new physical inspection of the site that revealed the wreckage of the Dragonfly, an early example of a military helicopter, lying to starboard on the gravel bar.

Although badly corroded, the helicopter’s frame and its three rotor blades were mostly intact, with remnants of the “Royal Navy” stencil still discernible on the tail boom.

Further research involving officials from the National Museum of the Royal Navy in Plymouth, the Fleet Air Arm Museum in Yeovilton and the Ulster Aviation Society identified the aircraft as a Westland Dragonfly naval air-sea search and rescue helicopter from 1955, based at Royal Naval Air Station Eglinton, now Derry City Airport. The helicopter had fallen on November 25, 1958, during a recovery exercise.

The 1958 crash site of a rare @Royal Navy The helicopter was identified as part of the Northern Ireland 3D Coastal Survey of the whole NI coastline, commissioned by DAERA’s Marine and Fisheries Division. More info: https://t.co/4NpRjlnkAK pic.twitter.com/zPFR42qDMw

The dragonfly’s discovery was an unexpected finding during the topographic LiDAR and orthophotography survey, which was completed in early 2022.

This survey provided high-resolution aerial photographs, near-infrared images, and 3D laser scans of the land surface to provide detailed information about the appearance of NI’s shoreline, as well as identify man-made structures and features. of the landscape threatened by coastal erosion. and sea level rise.

Marine archaeologists use this data to identify and assess archaeological and historical sites around the Northern Ireland coastline. These can include historic shipwrecks, medieval fish traps, monastic settlements, castles and fortifications, wharfs, slipways and industrial age seaweed farming sites.

While many of the sites examined are registered in the Historic Environment Register of Northern Ireland (HERoNI), research has so far identified over 150 new heritage sites, including 100 below high tide level.

The exact position of the helicopter wreckage is not disclosed as the crash site is located over hazardous soft sediments and a significant amount of potentially live World War II and post-war ordnance surrounds the website.

Further information about the find will be available on a new website, The Northern Ireland Coastal Observatory, which DAERA says will be launched in the near future.