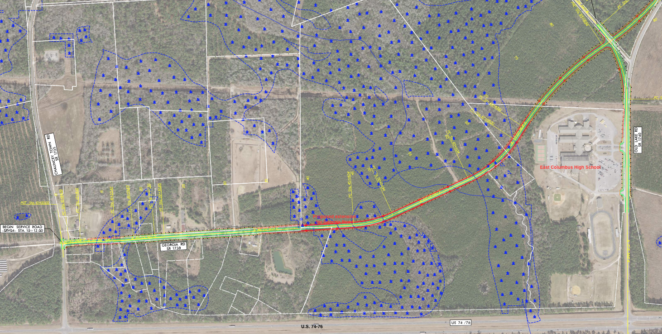 A highway project that has drawn criticism since its inception will go ahead next month.

Final improvements to intersections on US 74 at Lake Waccamaw will begin next month. Department for Transport spokesman Andrew Barksdale said the intersection with Chaunceytown Road will be converted to an interchange, while Old Lake Road will have an overpass with no direct access to the freeway.

Roundabouts will also be installed where the ramps join Chaunceytown Road, as well as at Chaunceytown’s intersections with NC 214.

Georgia Road – currently a dead-end dirt road that roughly parallels the four-lane – will be paved, widened and extended to the old Lake Road to provide access to East Columbus Junior-Senior High School.

The whole project is 1.3 miles long. Local leaders wanted to maintain at least some access to Old Lake and US 74 for emergency vehicles and local traffic, but federal highway standards — which must be followed to obtain federal funding — prohibit interchanges within two miles. Proponents of the two-way swap plan, however, pointed out that exceptions to the guideline are common across the state.

The original plan also called for an additional roundabout at NC 214 and Old Lake Road. However, this part of the plan was scrapped due to heavy truck traffic in the area.

BMCO of Lumberton won the $44 million project, one of the most ambitious changes along US 74 in years. NCDOT’s long-term plans are to upgrade all four lanes to interstate standards.

The contractor has until summer 2025 to complete all improvements, Barksdale said.

Currently, US 74 has at-grade intersections at Chaunceytown and Old Lake Road. Last year, the NCDOT converted these two junctions into reduced conflict intersections, which redirect drivers to the right on the motorway, to improve safety until the permanent changes under the new contract can be put in place.