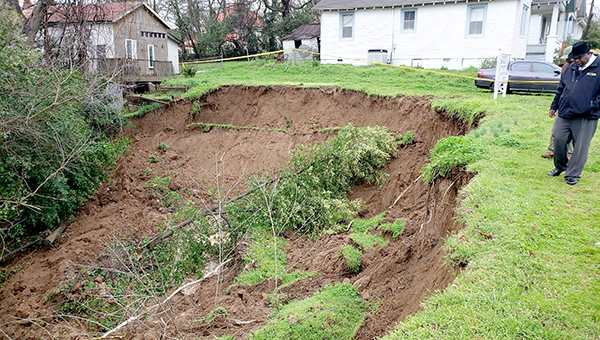 A Vicksburg contractor has been awarded the contract to repair erosion damage on Farmer Street and Clover Lane.

Acting on the advice of project engineer Neel-Schaffer, the College of Mayor and Aldermen awarded the job to Central Asphalt, which offered $500,645 to complete the project. The company was the only bidder.

The project will be funded in part by a Natural Resources Conservation Grant of $487,354, based on a total NCRS project estimate of $617,406. The grant helps cover 75% of eligible engineering and construction costs.

Farmer Street and Clover Lane were affected by severe erosion problems caused by heavy rains in January and April 2020.

Erosion on Clover Lane involved a landslide in a drainage area, while on Farmer Street much of a piece of land between 1108 and 1114 Farmer St. broke off and cascaded down a dead end section of China Street covering a car on China with trees.

Clover Lane and Farmer Street were two of nine projects involving erosion issues that were submitted to the Federal Emergency Management Agency by the city for an emergency grant.

Other areas included Riverfront Park, James E. Sturgis Sr. Street, Crestline Lane (street), Greenhill, a culvert on Crestline Lane, and a culvert near the intersection of Iowa Boulevard and US 61 South near McDonald’s and the City Park project to replace a damaged walking path and replace fencing.

When FEMA did not approve Clover Lane and Farmer Street for emergency funds, city officials requested the NRCS funds. In February, the board approved a short-term loan of $4 million to begin repairs to some of the landslide areas while awaiting federal money. The loan will be repaid with federal funds.

John Surratt graduated from Louisiana State University with a General Studies degree. He worked as an editor, reporter and photographer for newspapers in Louisiana, Mississippi and Alabama. He has been on staff at the Vicksburg Post since 2011 and covers city government. He and his wife attend St. Paul’s Catholic Church and he is a member of the Port City Kiwanis Club.

"Who was Georgia O'Keeffe?" look at the Kahlo, the friendship of the artist

The World's Greatest Shadow Artist, Kelly Slater, Paints a Masterful Portrait as Filipe Toledo Wins the Inaugural Title: "He didn't need to go out and hurt himself in Teahupo'o on a big day. He is the world No. 1. It doesn't matter what comes to Trestles!"