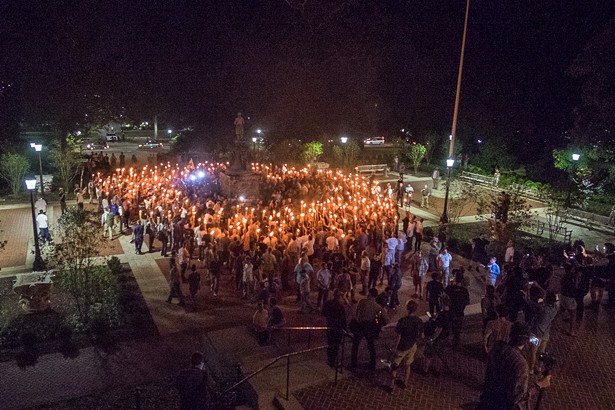 August 11 and 12 will mark the fifth anniversary of the tragic Unite the Right rally that rocked the college town of Charlottesville and the entire country. You can bet you’ll see plenty of articles marking the anniversary in what’s left of the local media next month.

Already this week, a photo exhibit returns to the Virginia Holocaust Museum titled “There’s Only Us” by Farmville photographer Alec R. Hosterman, who was in Charlottesville that deadly weekend to document the protests. The exhibition will be presented at the museum from July 18 to December 30, 2022.

According to a statement, “‘Only Us’ represents the violent clashes Hosterman has seen as communities fight hate and bigotry as well as the collective voices that have had the courage to stand up against all odds.”

“The Virginia Holocaust Museum was honored to host this exhibit in 2018 for the first anniversary and it is a privilege to host this powerful retrospective again in 2022,” said Samuel Asher, Executive Director of VHM. “It aims to remind us that the fight for diversity and inclusion in our communities continues, but we are never alone. Together we can remember those voices that fell silent too soon and resolve to make this world a better place to live.

Hosterman is a teacher and photographer who lives in Farmville. He is an associate professor of communication studies at Longwood University where “he teaches courses on public relations, social media technologies, deception and lying”.