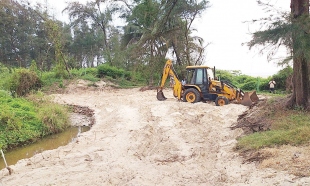 In their complaint, residents allege cutting and flattening of the sand dune, filling and encroachment on a tidal stream; require the offense to be recorded under CRZ Notification 2011

MARGAO: In view of the allegations made by the inhabitants of the villages of Cansaulim-Arossim-Cuelim (CAC) and the Action Committee of the Villagers of Cansaulim (CVAC) in a complaint lodged with all the authorities concerned concerning the alleged cutting of a sand dune at Arossim and damage to a stream, a large number of officials from various ministries carried out a joint inspection of the site.

The Deputy Collector of Mormugao and the Sub Division Magistrate (SDM), the Land Surveyor of the Directorate of Settlement and Land Records (DSLR), the Talathi and officers from the PWD Department offices, Forest, and Town & Country Planning (TCP) were present.

Villagers and members of the ward panch of the CAC panchayat were also present. Photographs and measurements of the site were taken and officials said they would prepare their report and submit it to their superiors and action would be taken if the allegations were verified. The Talathi also informed the locals that the mamlatdar will also forward his report to the Goa Coastal Zone Management Authority (GCZMA).

Other than the seizure of the JCB machine by Verna police on the day the alleged incident took place, however, no further action has been taken to date.

In their complaint, locals alleged that the cutting and flattening of the sand dune and the filling and encroachment into a tidal stream would be in violation of CRZ Notification 2011, the TCP Act of 1974 and other laws.

They further pointed out that cutting the sand dune by more than 10% is also a violation of cutting the hills.

They recalled that the Goa Foundation and the concerned citizens of Arrosim had shown where all the sand dunes were even in the Coastal Zone Management Plan (CZMP).

They expressed their anguish over the damage to the main stream and the community’s traditional nullah known as ‘Katream Handdi’.

They pointed out that the creek is an important resource, which fills with water from both sides. Also, traditional fishing activity takes place there and in the past they had blocked attempts to divert the path of the creek.

Locals have also struggled with damage to sand dunes in the past.

“We demand that an offense be recorded under the CRZ Notification 2011 by the GCZMA and the South Goa District Collector immediately,” the CVAC said in its complaint letters.

“Record the criminal offenses and FIR against those involved in the offense under the Environment Protection Act 1986 and order those involved to restore the sand dune/stream to its original condition “, they added.

How Glasgow artist Lachlan Goudie found his mojo in Mauritius