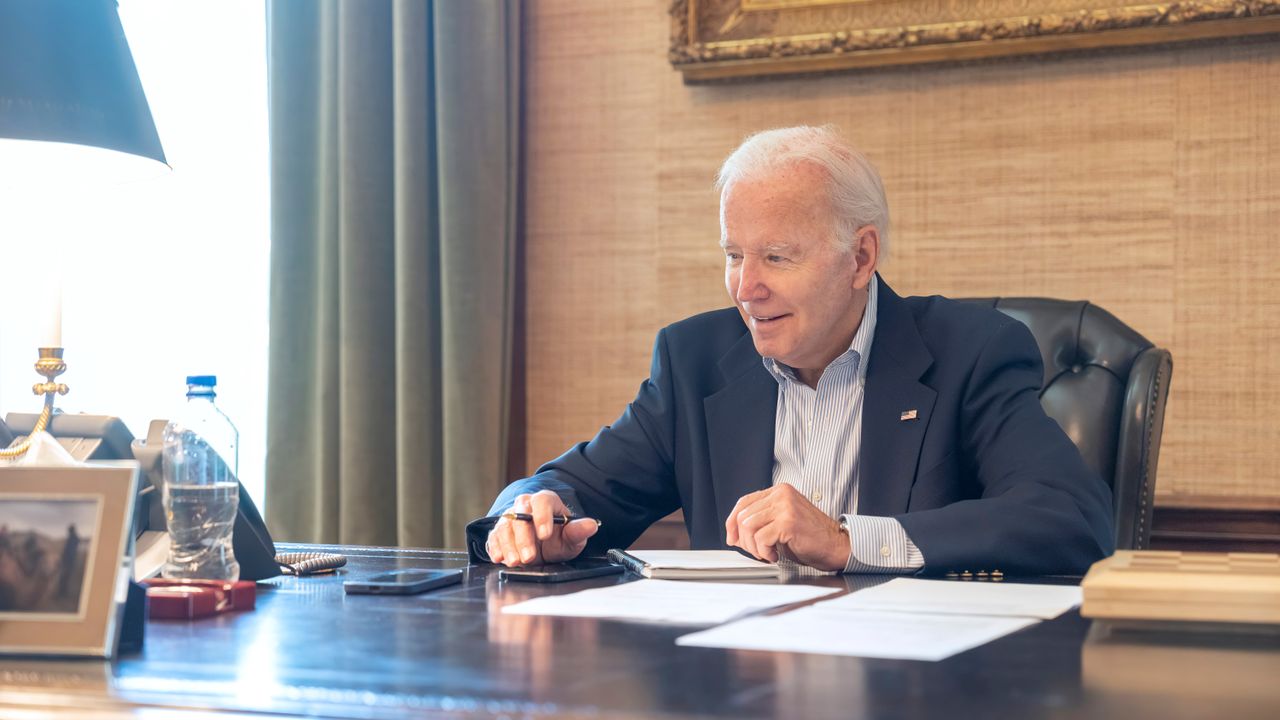 On Thursday morning, news broke that US President Joe Biden had tested positive for COVID-19. Biden’s infection takes place amid a massive global surge of the Omicron BA.5 sub-variant, which nearly every world government has sought to cover up through test takedowns, data manipulation and media propaganda of business.

The fact that Biden, who is surrounded by a level of security unknown to all but a handful of Americans, contracted COVID-19 reveals the recklessness of his administration’s “living with COVID” policy. In recent weeks, Biden has become the poster child for this propaganda campaign, taking numerous maskless photo ops around the world.

Historically, an announcement that the president is ill, including with a virus responsible for widespread deaths, would be taken very seriously, if only to create a political crisis. Instead, Biden’s fight with COVID-19 has been presented almost as cause for celebration.

Typical of this trend is an editorial in the Washington Post by Leana Wen, one of the leading Omicron Variant downplayers who supported all unscientific policies of the Biden administration. Wen writes, “President Biden’s covid-19 diagnosis is an opportunity for his administration to demonstrate his leadership success on the pandemic and what life with coronavirus is like.” She adds, “Biden should use his illness as an opportunity to educate the public that covid-19 is a manageable disease for almost anyone, as long as they use the tools at their disposal.”

Instead of reflecting on their disastrous mishandling of the pandemic — which has now killed more than 600,000 Americans in the first 18 months of his administration — the Biden White House is promoting that same line and emphasizing that he will continue to work while is sick with COVID-19, with the implication that all Americans should do the same when infected.

In a Photo shoot posted Thursday afternoon, which clearly exposed the photographer to the airborne virus, instead of recovering, Biden is shown without a mask and working at his desk, with the caption “Keep busy!” In a follow-up video, Biden says, “I’m fine, doing a lot of work. I will continue to do so.

In a press release, White House Press Secretary Karine Jean-Pierre stressed that Biden “will isolate himself at the White House and continue to fully perform all his duties during this time… and will participate in his scheduled meetings at the White House this morning via phone and Zoom from residence.” She added: “He will continue to work in isolation until he tests negative. Once he tests negative, he will return to work in person.”

At a press conference on Thursday afternoon, co-hosted with White House COVID response coordinator Dr. Ashish Jha, media quack, Jean-Pierre said: “With the photo, he took off his mask so that the American people could see him, and see directly, see the work he’s doing and sitting at his desk, continuing to do his work. Later in the press conference, she said bluntly, “We knew it was going to happen. As Dr Jha said when he joined me in the briefing room not too long ago, he said, “At some point, everyone is going to catch the covid.”

Behind the almost celebratory pronouncements from the White House and the media lies a deeply troubling reality.

The Job The commentary concludes that being repeatedly infected with COVID-19 will be “the new normal going forward”, even for the president. “Indeed, this is certainly not the only time Biden will contract the coronavirus. He, like all of us, could contract the virus once a year or more.”

An article by Apoorva Mandavilli in the New York Times states: “President Biden’s coronavirus infection is a stark illustration that Covid vaccines, powerful as they are, fall far short of the bulletproof shields scientists once hoped for.” She adds that “even booster doses offer little defense against infection, especially with newer versions of the virus. The protection they offer decreases sharply and quickly, according to several studies. In the president’s case, the booster shot he received nearly four months ago likely lost most of its ability to ward off infection.

Mandavilli notes, “Earlier in the pandemic, experts thought vaccines would be enough to prevent not just serious illnesses, but the vast majority of infections… But the Omicron variant has dashed those hopes. As more and more of the population acquired some immunity, whether through infection or vaccines, the virus evolved to evade these defences…Each subsequent avatar of the virus became still best for bypassing immunity.

What is described here is a public and personal health disaster.

Numerous studies show that infection with COVID-19 can damage nearly every organ in the body, and reinfections increase the risk of this damage. If the media and politicians were honest, they would tell the American public, “You can be infected and seriously ill for days or weeks at a time, once or more a year, and with each re-infection your chances of death or develop long-term complications will worsen.

The implication of this “new normal” is that more resistant variants of the immune system will continue to evolve, causing repeated waves of massive infection, weakening and death, potentially for years or decades to come.

A biological time bomb has been triggered, and at any moment a new variant could evolve that is more transmissible, more immune and deadly than any previous variant. With each new variant, the death toll will continue to rise, life expectancy will decrease even further, and quality of life will decrease for millions more people suffering from Long COVID.

Despite the happy rhetoric in the media, the United States is currently mired in a prolonged and increasingly severe wave of Omicron subvariants, the most infectious and immune system resistant BA.5 subvariant now dominant. While Biden is the most public figure currently infected, virtually everyone in the country knows of several family members, friends or colleagues currently or recently infected with COVID-19.

After a two-month lull in infections, since late March cases have been steadily rising across the country, with the official seven-day average of daily new cases rising nearly fivefold to 128,933 on July 20, according to News Nodes. Hospitalizations related to COVID-19 have more than tripled since their April 17 low, reaching 42,612 on July 20. Over the past month, the seven-day average of new daily deaths jumped 57%, reaching 413 on July 20. week, as many Americans are now dying of COVID-19 as were killed in the 9/11 terrorist attacks.

Since the winter push of the Omicron BA.1 subvariant, testing has been greatly reduced in the United States, resulting in a total decoupling of official numbers from the actual level of disease in society. The true extent of viral transmission can be seen in nationwide sewage sampling, which shows the current surge has surpassed the peak of the Delta variant a year ago.

From the very beginning, the entire American political establishment clung to the concept that the virus will be stopped partly by vaccination and partly by mass infection, or what was called “the herd immunity” under Donald Trump.

The highly infectious and immune-resistant subvariant of Omicron BA.1, which triggered the most devastating wave of infections last winter, was treated with thinly veiled enthusiasm. In January, Dr. Anthony Fauci said it could be “the live virus vaccination that everyone is hoping for.” Dr. Jha said he “hoped it was really the transitional variant that would put us on a different footing.”

The vaccine-only strategy, based on these unscientific conceptions of viral evolution, which many principled scientists have warned against, has been shattered by the experience of the past eight months. The emergence of the Omicron variant and each of its subvariants proves the most fundamental argument of the Zero-COVID global elimination strategy, that in the absence of proven and essential public health policies, the pandemic won’t stop.

Along with the worsening COVID-19 crisis, monkeypox has been allowed to spread across the country almost entirely unchecked. Infections in the United States jumped to 2,425, the second highest figure in the world.

The abandonment of all efforts to stop the COVID-19 pandemic, instead demanding that society “live with the virus”, set the stage for the disastrous response to monkeypox and all future infectious diseases. Likewise, nothing is being done to stop the growing existential threat of climate change.

American individualism, increasingly promoted over the past four decades, has taken on a socially pathological and criminal character. Public health and all social needs are now entirely subordinated to the profit interests of the corporate-financial oligarchy.

To varying degrees, the same policies have been implemented around the world with the same recklessness and stupidity of the Biden administration. Every capitalist government outside of China has surrendered to SARS-CoV-2, unleashing the virus to infect billions, morph into more dangerous variants, and wreak havoc on global society for years to come. come.

The Socialist Equality Party (USA) and its affiliated parties of the International Committee of the Fourth International (ICFI) are the only political tendency in the world that has opposed these murderous policies and called for a strategy of globally coordinated elimination to stop the spread of COVID-19 around the world.

It is essential that workers, professionals and principled scientists draw the necessary political conclusions from the catastrophic first two and a half years of the pandemic. Only through the socialist reorganization of the global economy will it be possible to end the pandemic, halt and reverse climate change, and prevent the outbreak of future pandemics.

Join the fight to end the COVID-19 pandemic

Someone from the Socialist Equality Party or the WSWS in your area will contact you shortly.