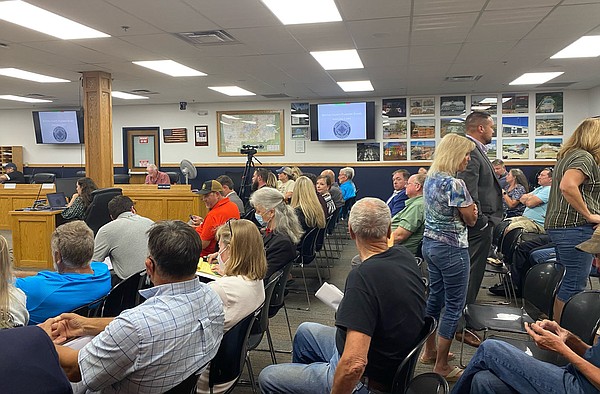 BENTONVILLE — The Benton County Planning Board delayed a vote Wednesday night on a plan for a glamping site.

Planners voted 5-0 after a public hearing to delay the vote for two weeks to gain more clarity on the project. The board also wants an update on several conditions that must be met for project approval. Two conditions were for the septic tank and having a hydrologist determine if groundwater is flowing into Beaver Lake.

The vote will take place at the September 21 meeting.

Contentment in Beaver Lake is provided at 12200 Shockley Place Road. The site is east of Hickory Creek.

The item was previously filed by the Planning Board to gather more information.

Rogers attorney Brent Johnson, who is representing the plaintiff, told planners the project encompasses 200 acres, including 33 acres for glamping. He said the project will include hiking areas.

Johnson said the project is compatible with surrounding properties and he is asking planners to approve the project.

Planning Board member Bob Bracy asked about the water features in the area.

Johnson said a water well has been approved and the engineer will work on the septic plan if planners approve the project.

Johnson told planning board member Bethany Rosenbaum that he hadn’t seen a petition with 500 signatures against the project.

Johnson said this was the first phase of the project, but his client would have to submit any plans for expansion to the planning board.

Dozens of people attended Wednesday’s meeting. Individuals had three minutes and a person representing a group had 10 minutes to address the board.

James McCarthy, environmental quality manager for Beaver Water District, told planners the district opposed the project because of water quality concerns. McCarthy said the concern was the proximity of an intensive project near the district admissions system.

Denton was concerned about the project’s impact on water and sewage collection. She also asked why the project would be put in a rural residential area.

Hank Barnes said he has lived in his house on Railcut Road for over 32 years. Barnes was also concerned about the project’s impact on water quality. He asked the board to look at all the facts about the project and think about the people who might be negatively affected by the project.

Steve Wilson, a former firefighter with the Piney Point Fire Department, said the department did not have the manpower for the project.

Anne Yancey said she lives across from the proposed project. She said the project is incompatible with the current use of the area and with the water supply.

A few other people spoke up and opposed the project.

Carlos Mayo, who lives in the area, said he wasn’t opposed to the project and thinks it’s one of the things people see in ads to lure people to the state.

Scott Leachman said his property was near the site. He said he was initially against the project based on rumors he had heard.

Leachman said he changed his mind and asked planners to compare the project to Camp War Eagle. He said the glamping site will bring more income to the area.

Zach Stoltenberg, architect of the project, said the aim was to provide a luxury glamping experience. He said it will be a premier resort to attract people to the site and enjoy Beaver Lake.

He showed photographs of the tents with one-bedroom, one-bathroom units.

“These are not pitch-in-your-yard type tents,” he said.

He said it wasn’t backyard camping. “That’s where the G of glamping comes from,” Stoltenberg said.

Stoltenberg showed photographs of boxcars and other structures at the proposed site.

Noel Ottaviano said he lived opposite the site. He said planners have listened to people’s concerns, but the worries are who is making sure all the conditions are met.

“If everything is not followed, it could impact our drinking water,” he said.

Ottaviano said he thinks it could be a good project for northwest Arkansas if done right.