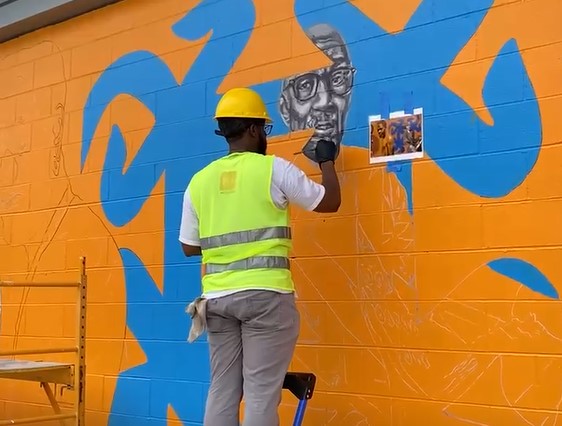 Shaw’s career as a painter, muralist and art educator spans over three decades. He has a number of murals across Baltimore, as well as murals located in Rochester, New York; Atlanta, Georgia; and Cali, Colombia.

Currently, Shaw is an arts educator at Green Street Academy, a charter middle and high school located in West Baltimore.

“Recognizing the nuanced history of the Lexington Market, it is an honor and a privilege to join an esteemed group of artists to create images that reflect and validate the lived experiences of the Market riding,” Shaw said in a statement. communicated.

According to his website, Shaw’s work focuses on “authentic depictions of the black body.” Many of his works across Baltimore, including his mural of Toni Morrison in Graffiti Alley, feature black characters.

Shaw is just one of many artists whose work will be on display in the new Lexington Market.

In 2021, it was announced that three teams of artists from Baltimore had been chosen to create unique art installations for the renovated market.

Installations include mother-son duo Oletha DeVane and Chris Kojzar’s sculpture “Robert and Rosetta”; “Food Play”, a sculpture by Reed Bmore, Nick Ireys and Eric Smith; and “Our Ties to the Market,” a work by photographer and collage artist SHAN Wallace in collaboration with historian Jessica Harris.

Each piece is a tribute to Lexington Market’s relationship with the people of Baltimore, acknowledging the market’s deep history.

According to a press release, DeVane and Kojzar’s “Robert and Rosetta” is a commemoration of the “two recorded cases of slaves being sold to the market or hunted for their connection to it.”

“Food Play” is an interactive exploration of the “complex relationships” people have with food.

“Our Ties to the Market,” which was created with the help of cultural food historian Jessica Harris, is a tribute to black food culture in Baltimore and American public markets. Wallace’s work is a continuation of “The Avenue”, his recent installation at the Baltimore Museum of Art.

These works of art are just one step towards revitalizing Lexington Market.

In 2019, the Baltimore Seawall development company launched the “Transform Lexington” project, which aimed to expand the Lexington market into two structures.

Innovating on the existing Market car park and Arcade structure on Lexington Street, Seawall made way for the South Market, a “pedestrianized urban plaza”. The South Market will operate in tandem with the East Market, which has remained open throughout the renovation process.

The new South Market building, which will include more than 45 new vendor stalls, is expected to open in fall 2022.

Liv Barry is Baltimore Fishbowl’s 2022 Summer Reporting Intern. Barry is a rising junior at Washington College, majoring in Communication and Media Studies and a double minor in Journalism, Editing and Publishing, and Arts Management.