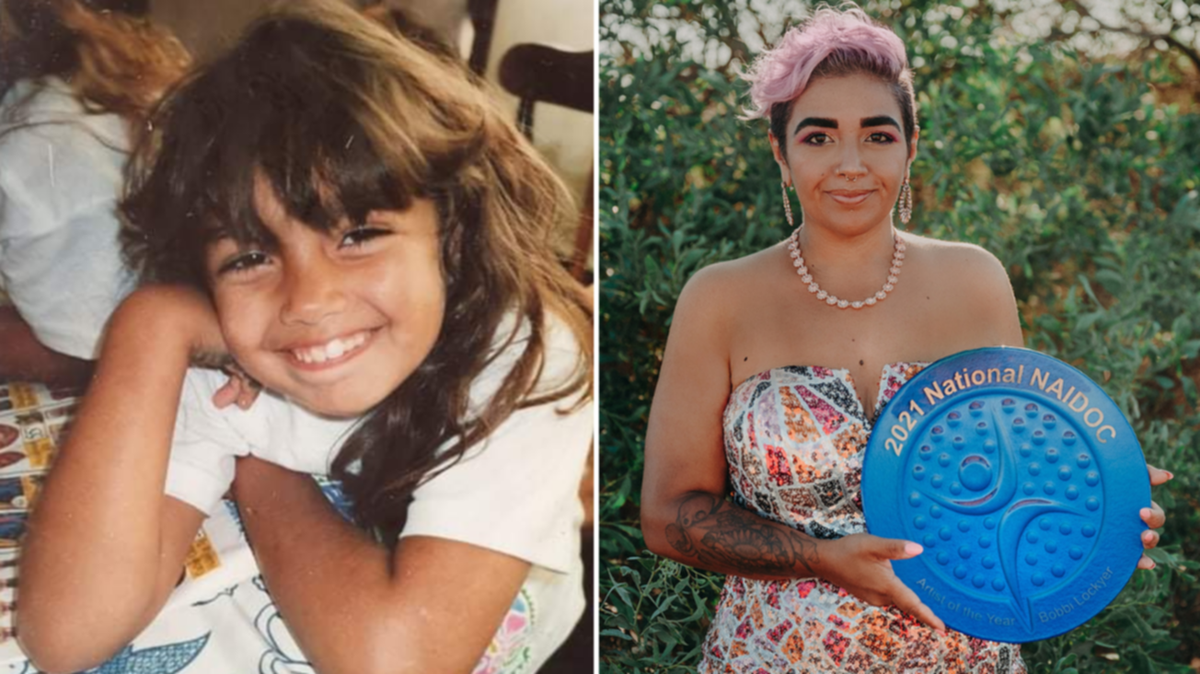 But behind the mum-of-four’s success story is a story marked by abuse, self-harm, trauma and domestic violence.

WATCH THE VIDEO ABOVE: How Bobbi found strength in adversity

The 36-year-old has faced more battles than most, but Bobbi says her experiences have ignited her passion to “stick” to those who have hurt her.

Bobbi tells 7life Gone are the days of being bullied for looking like a “dead rat”. She used her experiences to fuel her inner fire and she doesn’t look back.

“I was constantly bullied for being aboriginal,” Bobbi says of her childhood.

“Kids would say ‘do you even brush your hair’ or ‘you’re so ugly’ and even ‘your eyebrows are so big’.

“Now people get their eyebrows tattooed just to look like mine,” laughs Bobbi.

While the Kariyara Country (Port Hedland) local can now joke about her childhood, she reveals it took her decades to come to terms with the racism ingrained in Australian culture.

“There’s such a stereotype of Native people, whenever there were stories in the news, kids at school would always say ‘you’re all the same’ or ‘you’re going to end up like this’.

“It was really hard to be one of the few aboriginal kids,” says Bobbi.

“I was constantly bullied for being Indigenous” – artist Bobbi Lockyer

Expressing his dreams of becoming an artist, he was quickly told to find another career path or a “real job”.

Bobbi devastatingly reveals that she reached her breaking point during her teenage years and started self-harming.

The bullying left a young Bobbi feeling empty and unwilling to be alive.

Without “self-esteem”, she confesses that she hated herself and would avoid representing her culture in any way.

So even though Bobbi clung to her dream of being an artist, whenever she drew people, they were always “white and blond.”

“I’ve never seen someone like me…someone brown on magazine covers. So when I was drawing, I was only drawing what I thought people wanted,” she reveals .

Bobbi continued to fight for her art and she eventually became a photographer and did some graphic design work.

She went on to have four children, but she also suffered from a situation of domestic violence.

“Slowly his control grew over the years,” she says of her relationship.

“There were times when it was physical…and times when he degraded me and called names on me.

“He gaslit me a lot, he made me think it was me going crazy like I was imagining things,” she reveals.

“I kept coming back to him, and when the police came in and they got him off the property for 24 hours, he just came back,” she says.

Along with her beautiful sons, Bobbi has found refuge in her art.

In February 2008, Bobbi’s partner pleaded guilty to unlawfully assaulting her in aggravated circumstances in which he was fined $400.

And finally came a turning point.

After an incident, a police officer took Bobbi and her newborn baby aside.

“She (the police officer) just told me that if I really wanted to leave, she could help me,” Bobbi recalled.

With the help of her mother and sister, Bobbi took her four sons and left.

It’s been five years and she’s never looked back.

Her life slowly begins to change after her mother encourages her to get back into painting.

“The painting was so healing. I was depressed, but the more I painted and created, the happier it made me…it made me feel like myself again,” she admits.

“It was the start of our new life,” she beams.

And that was only the beginning.

Now identifying as a member of the LGBTIQA+ community, Bobbi is 35 and thriving.

She’s partnered with Nikon, has photographed magazine covers, had her work featured in Beijing, paraded her designs at Paris and New York Fashion Week, and was NAIDOC Artist of the Year (2021).

In partnership with The Body Shop, the artist designed gift tags with proceeds going directly to Amnesty International’s fight to raise the age of criminal responsibility – a cause close to Bobbi’s heart.

“There are such stereotypes that Indigenous kids are into crime and it breaks my heart,” the mother said.

Bobbi has also teamed up with Australian blogger Constance Hall on her Free Her campaign for the collective human rights of women and girls in prison.

“It’s really special to know that I can make a difference with my creations”, she adds.

The proud survivor doesn’t just make art that moves the world. It creates real change on our doorstep.

You can find Bobbi’s artwork here and support her custom designs here.

If you need help with a crisis, call Lifeline on 13 11 14. For more information about depression, contact Beyondblue on 1300224636 or talk to your GP, local healthcare professional or someone of confidence.

Walney artist paints musicians after being hit by car