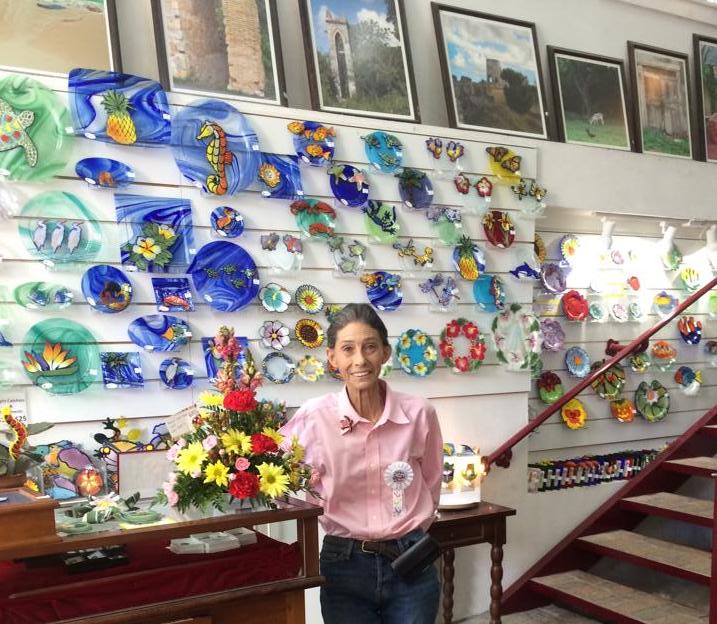 Holy Cross artist Jan Mitchell completes a project to support the people of Ukraine against an unprovoked siege by Russia to take control of their country.

Using the country’s national flower, the bright yellow sunflower, and her canopy skills, Mitchell created a one-and-a-half-inch circular pin on a bright blue background for men and women to show their support for the beleaguered country.

“You come home from work and say, ‘What can I do?’ she said after the war started.

Mitchell is the only one who can make the pins and has made over 900 pins so far. She made a batch of 80 sunflowers which are taken to the Polish border by a Crucian to show that the Virgin Islands are aware and care about the conflict. She said she couldn’t keep up with demand and decided to make the last batch of 72.

“I love doing this and I’m thrilled with all the support from the community,” she said.

After 9/11, Mitchell made hundreds of red, white and blue pins in support of New York.

Every penny of the more than $5,100 raised so far from sales will be sent to support Ukrainians. She has researched several charities working in the country and hopes to find one that uses all the funds it receives for the people of Ukraine.

Sunflowers are a long-loved aspect of Ukrainian culture. The flower was introduced to Ukraine in the middle of the 18th century by the Spaniards. Now flowers are abundant throughout the country – in villages, gardens and fields. Sunflowers are woven into clothes and headdresses used for celebrations.

Over the centuries, Ukrainians have nibbled on sunflower seeds and crushed them into oil. The oil became popular in Europe as an alternative to butter and lard and is now a key part of the economy. Ukraine and Russia account for 70-80% of world sunflower oil exports.

According to the Smithsonian Magazine, sunflowers have cultural significance for Ukrainians beyond the economic engine that they are. In 1986, the explosion of the Chernobyl nuclear power plant in Ukraine released radioactive material into the environment, killing 31 people. After the disaster, scientists planted sunflowers to extract toxins from the soil and remove radioactive elements from soils and ponds. (After the Fukushima disaster in 2011, a similar planting of sunflowers took place in Japan.)

Again in 1996, sunflowers signaled the peaceful intentions of the nation. Ministers from the United States, Russia and Ukraine commemorated Ukraine’s nuclear disarmament by planting sunflowers at the Pervomaysk missile base. The Smithsonian quoted US Secretary of Defense William J. Perry as saying the common goal was “to ensure that our children and grandchildren live in peace.”

Mitchell opened his studio in 1993 and has produced hundreds, if not thousands, of plates of all sizes and shapes. Several years ago the name was changed to Mitchell Larsen Studio. Husband/professional photographer Steffen Larsen displays his distinctive photos above rows and rows of glass plates and trays.

Over the years he has been commissioned by local charities to design and manufacture plaques for trophies after golf tournaments, races and other fundraisers.

Photographer captures worthy portraits of wildlife in the studio