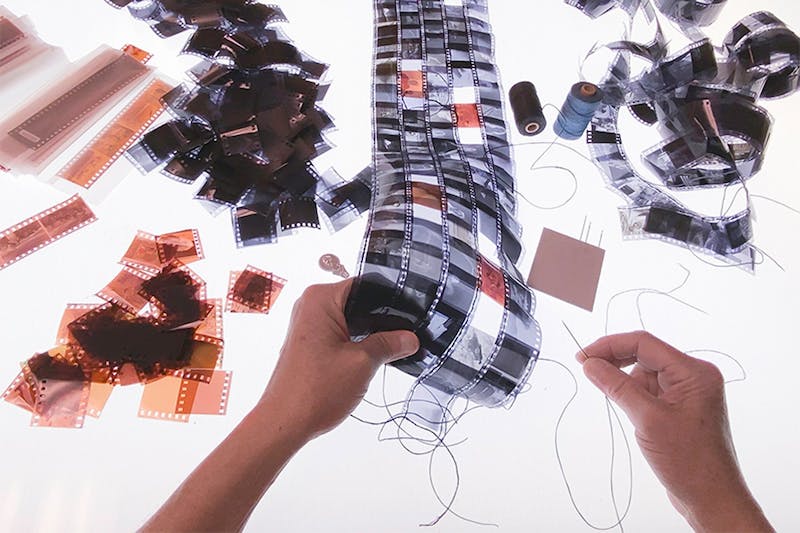 The “I REMEMBER“ project, a community arts project using donated film negatives, will be featured on Friday at the Durham Third Friday of January Reception from 6-8 p.m. in the Durham Arts Council building.

Elizabeth Stone, photographer and visual artist from Montana, is the creator of the “project I REMEMBER”.

She got the idea for the project from a previous personal artwork called “Ecdysis”, a 2019 installation she created by stitching over 3,000 of her personal 35mm film negatives into a large sculptural piece.

Stone called this piece a “statement of self”.

But now with the “I REMEMBER” project, instead of using his personal negatives, Stone worked with members of the community to stitch together a given film. Donation points for the project have been set up around the Triangle.

“I asked for film donations, either negatives, which was my preference, or small slides, and assembled them into one large piece to reflect your community’s identity,” Stone said.

She thought about the community and what unites it throughout the process of creating “I REMEMBER”.

“I also thought about where we are right now in this country and how divisive things can be,” she said. “And so I wanted to find a way to tie individual members of your community and their stories together into one big piece.”

Stone held small sewing bees where people gathered to sew the film negatives into small squares, which were then joined to create the artwork.

“It was one of the most rewarding parts of the project,” Stone said. “You just need to have people come to the table, get to know each other, and participate in making a work of art.”

Stone worked on this project in October, when she was artist-in-residence at Cassilhaus, an artist residency and exhibition program located between Durham and Chapel Hill. This program began in 2009 and artists stay for three to seven weeks to complete a project of their own design and choice.

“We started working with (Stone) long before she came here so she could have a meaningful and profitable time while she was here,” said Cassilhaus co-founder Frank Konhaus, who directs the artist-in-residence and exhibition programs. “We put her in touch with many people in the area who could work with her on her project.”

Susan Tierney, head of artist services at the Durham Arts Council, said the council had worked with Stone from the start of her project, helping coordinate donations and sewing bees.

“I love the idea behind what she was doing because we’re all living in this incredibly conflicted time period, and she kind of reflects on what we all have in common,” Tierney said. “What’s the thing that We’re all human beings, and we’re all in this together, and it’s telling stories.

Although the “I REMEMBER” project will be posted this week, it is still in progress. Stone said she would like the piece to remain in the Triangle, and she encourages people to continue donating films to expand the project.

Eventually, she hopes to find the piece a permanent location in the community.

“In the meantime, I want it to travel within the community so people can see it, reflect on it, and depending on how the pandemic unfolds, maybe have a few more bees to sew so people who want to contribute to the piece now could come together and sew negatives together and make the piece even bigger,” Stone said.

Requests for movie donations and future sewing bees can be made through Stone’s website.

To get the day’s news and headlines delivered to your inbox every morning, sign up for our email newsletters.