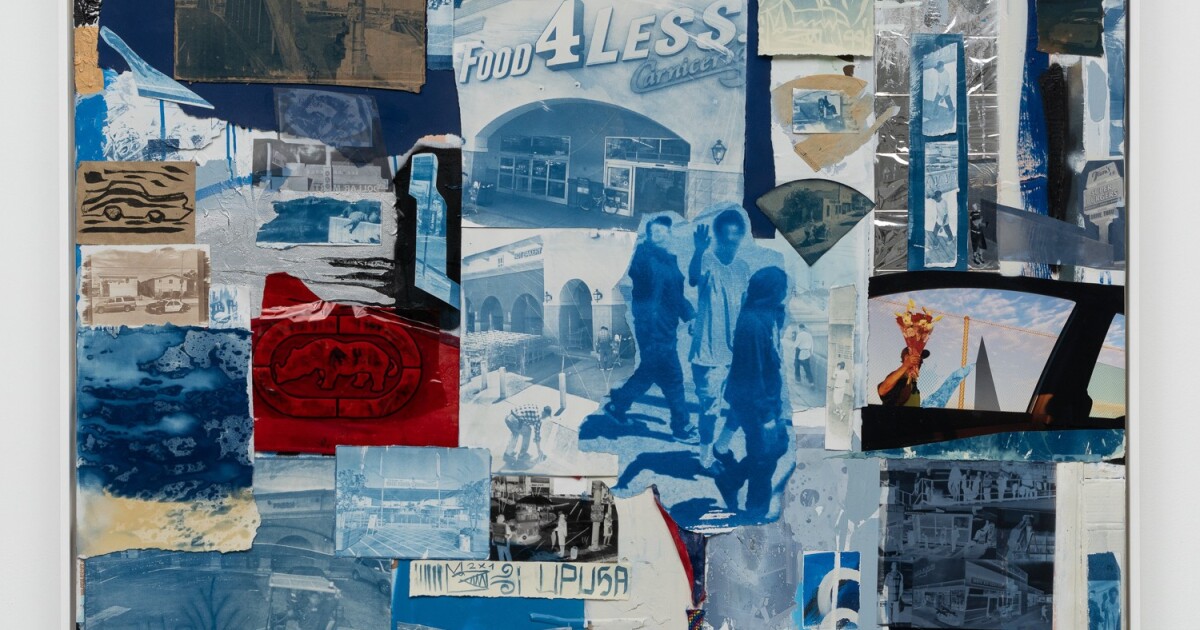 Artist and educator Felix Quintana acts as much of a curator as a photographer, carefully curating images of the Southeast Los Angeles neighborhoods he grew up in by scanning photo footage captured by Google Maps Street View. In her current exhibition, “Cruising Below Sunset” at the Residency Art Gallery, Quintana chooses a past, incidentally captured moment to shine a light on people who were originally rendered insignificant. These repurposed images, printed in cyanotype blue, make up the ongoing series, “Los Angeles Blueprints” (2019-present), which is featured in the exhibition alongside “Para Los Little Homies” (2019-present), a series of mixed media collages and a three-dimensional sculptural collage suspended by zip ties from the gallery ceiling.

Although the faces of the characters that appear in the series of photographs are blurred by Google’s navigation tool, Quintana restores attention to their humanity and the meaning of their movements with its descriptive and narrative titles, such as “Posted on the beach cruiser by the old Compton Fashion Centre” (2022). It playfully adorns the snapshot of what might otherwise be an ordinary scene of someone in full motion – walking, driving, cycling, working – by marking faint white streaks across the prints, like traces of writing on a blackboard. “Google Street View comes in and takes images very apathetically,” Quintana explained in an interview with KCET. “I wanted to change that.”

“What would it mean for someone from a place like LA, born and raised here, to find images and ways to uplift people in some way?

He was initially inspired to make these “ready-made images” after being introduced in college to the work of Doug Rickard, a white artist from San Jose who used the technological tool in 2009 to visit and digitally capture images of cities where “unemployment is high and educational opportunities are scarce.” Rickard documented mostly blacks and browns in cities like Detroit, New Orleans, and Fresno, never leaving his home. “I thought it was really interesting, conceptually, but I also felt like the work was a bit problematic,” Quintana explained. “I thought to myself, what the fuck would it mean for someone from a place like LA, born and raised here, to find images and ways to uplift people? Because documented people with this kind of objective documentation, are probably working-class people walking to work, taking the bus, walking down the street.”

While browsing Google Street View in 2014, he came across his father, who had died two years earlier. He was arrested in his truck at the end of the block where Quintana grew up. “If you zoom in you can see him with his curly hair and sunglasses on, so I kind of sat in that picture for a while.” This image became “El jefe making a left from Soul Street onto Long Beach Boulevard (under ag)” (2022) and part of “Los Angeles Blueprints”. It also became a strong reminder and motivation for Quintana to do his job. The people he finds in the Google Street View images may not be relevant to the tech company, but for Quintana they are not anonymous – “I may not know them, but I feel a certain connection.”

Born in 1991 in Lynwood, California, to parents who moved to southeast Los Angeles after fleeing the civil war in El Salvador, Quintana knew he wanted to be an artist ever since his kindergarten teacher gave him the word. Inspired by cartoons, graffiti, music (like hip hop, rock, jazz and cumbia), streetwear brands, poetry and his older cousins, he grew up exploring many forms of creative expression before embarking on photography. In high school, he started taking photos while riding the bus around LA, kept a blog, and even had a side gig as an event photographer, documenting backyard parties. Disappointed that their photography class focused on Photoshop and digital cameras, he and his friends cleaned up the dark, locked room at their school so that their teacher would train them in film use and development.

Quintana uses one of the oldest photographic printing processes to develop its images – cyanotype printing, in which the resulting blue color gives the method its name. (All of the artwork in “Cruising Below Sunset” is predominantly tinted blue.) He was first introduced to cyanotype while studying photography as an undergraduate at Cal Poly Humboldt, but never started using the method only in workshops with his students while working as an artist teacher in Los Angeles after graduating. At this time, in his personal practice, he worked primarily digitally, layering light photographs in Adobe Photoshop and creating gestural and painterly artwork. He began incorporating cyanotypes into his own work while pursuing his Masters of Fine Arts degree at San Jose State University. He craved something more practical and the analog process forced him to slow down. Cyanotypes have given Quintana the ability to adapt the pace of his practice to the intentionality and care he bestows on his subject – his hometown and the working-class people who move there, work there and live there.

Some of the photographs from the “Los Angeles Blueprints” series are reprinted and layered in the collages among family photos, found clothing, spray paint, cardboard, coffee filters, and bills of exchange. Characters who might have gone home or to work are now cut out of their original backgrounds and placed around cyanotype prints and recognizable signage digital negatives like the 99 Cent Only store, Tam’s and Felix the Cat, corners streets and bridges; Hats off to LA, CDs and street photography from Quintana, creating entirely new landscapes that still feel familiar. Just as it imagines the depth behind blurred faces captured on Google Street View, Quintana highlights grocery store parking lots and local business signs as if they were small landmarks in their own right, transforming commutes for daily errands. in tributes.

The torn edges of the paper and drippings of paint reveal the artist’s quick and intuitive movements, while other aspects of the work reveal deliberate and painstaking attention, such as the painstaking process of collage and hand-printing. hand cyanotype images – their imperfections, imperfect exposure and monochrome reproduction blending past and present, almost suspending the viewer in time. In “Cruising Below Sunset”, Quintana replicates the leisurely rhythm referenced in the show’s title through its process and subject matter, setting a tempo for the viewer to follow. It features people captured in full motion and slowed to a pause, incidentally captured by cameras on a moving car. Quintana sees cruising as “a challenge to movement” – a resolve to stay put. Reversing footage originally taken in the form of surveillance, it manages to constitute a kind of archive of collective memory – documenting and honoring the tone and language of a changing black and brown working-class Los Angeles.