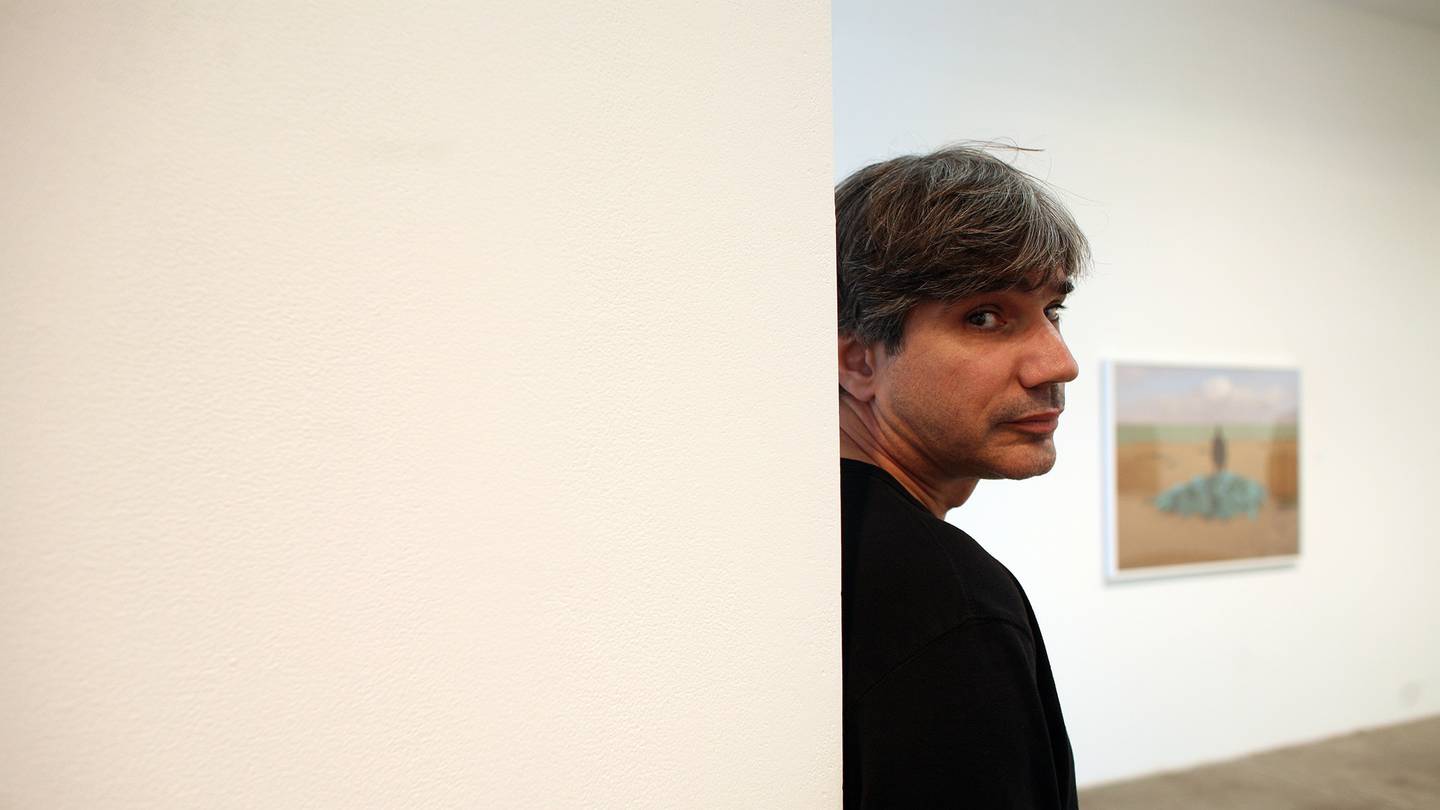 The death of Tarek Al-Ghoussein has caused shock and grief across the UAE and Arab art world this week, after the Abu Dhabi-based artist was found unconscious in New York on Saturday morning.

Al-Ghoussein worked rigorously and regularly as a photographer, often on large-scale encyclopedic projects. He has also been an educator and mentor to a generation of young artists at the American University of Sharjah and since 2013 at New York University in Abu Dhabi.

Despite his stature in the UAE art world, he maintained a humility and openness that made him not only an important figure, but also a beloved person.

He was born in 1962 in Kuwait parents of Palestinian origin. His father was a diplomat and he grew up in various places around the world, including the United States, Morocco and Japan. Al-Ghoussein earned his Bachelor of Fine Arts in Photography from New York University in 1985 and then an MFA in Photography from the University of New Mexico in 1989. He worked as a photojournalist after graduating, before moving on to fine art photography.

The artistic work that developed from the 1990s and the beginning of the 2000s was often concerned with the media image of the young Arab man, then under close surveillance. His series self-portrait (2003-05) attacked the stereotype of Arabs as terrorists, showing himself posing in keffiyeh in front of airfields and buildings. The threat he sought to thwart was more than theoretical. While shooting an image, for which he looks across the Dead Sea towards Palestine, he was apprehended by Jordanian police and held for 22 hours.

He also explored his Palestinian identity. In B-series (2005-06) he documented a series of walls and barriers, a series that began with reference to the wall in Palestine. And in Crisis unit (2004), presented at the Sharjah Biennale in 2005, he documented the media representation of the American invasion of Kuwait, linked to cinematographic or other pop cultural representations of the conflict.

But in the 2010s, Al-Ghoussein left this field of inquiry, believing that his work was too narrowly reduced to identity politics. In retrospect, Al-Ghoussein’s early works already exhibit the characteristics of what became his sustained project, even if it seemed to have been ignored at the time: the investigation of place and its role within it.

Throughout his career, his austere, large format images have depicted scenes of desolation, entropy and change, as if it were a field of interconnections in which he navigates in an uncertain role. Travel, too, was vital: Al-Ghoussein was always on the move, documenting new settings and himself within them.

Once again, these landscapes do not conform to the images of destruction in the Middle East: the sites he photographs are also often construction sites. The In (the embellishment) The series, filmed in 2011, shows Abu Dhabi’s Saadiyat Island on the brink of transformation, as the foundations were laid for what would become the site’s suburban landscape today. The natural world plays an active role, with sand gathering in neat mounds, newly planted trees forming streaks across the landscape, and watchful blue skies shining above.

In 2015, Al-Ghoussein began photographing Al Sawaber, a modernist complex in Kuwait. It had been built in 1981 to provide public housing for Kuwaiti families, but had become dilapidated and by the late 2010s was slated for demolition. Al-Ghoussein’s photographs alternate between the architectural elements of the complex, with its rounded entrances and clean, shaded corridors. They also capture the unruly and individual details of each family’s home, their lives readable in the objects they left behind: footballs, vases, books, bags and prayer rugs.

Al Sawaber was home to many different nationalities, a complexity that Al-Ghoussein’s global and itinerant approach underscores. He became, he says, almost obsessed with location, seeking to photograph as many abandoned apartments as he could.

His latest work, the unfinished project Ulysses, is also striving for completion. He set out to document all of Abu Dhabi’s 214 islands. The goal engaged him in an almost performative task. (In a 2008 interview with The National, he called his work “performance photography”. Behind the series of beautiful, austere photographs is a field of social bargaining: discussions with the authorities, planned boat trips to various islands, and attempts to leverage any waste or influence – which he constantly denied he had – to complete his project.

Al-Ghoussein had been working on Ulysses since 2015, persevering through the Covid-19 pandemic, and had captured around 160 islands by the end of its life (the exact number remains unclear). The images reveal the scale of Abu Dhabi’s vast archipelago and achieve this seemingly impossible task of communicating the perceptual feel of place: the gusty wind, visible in sand dunes or tears in abandoned posters; the dust covering the dilapidated playgrounds; the heat visible by the total absence of vegetation.

‘Abu Dhabi Archipelago, (Marawah)’ by Tarek Al-Ghoussein. All images courtesy of the artist and The Third Line, Dubai

The artist appears in many of them, like Odysseus surveying the islands on his way home. When he first presented the project, to Warehouse421, the title seemed to clearly refer to Sisyphus’ task of visiting all the islands, some of which were government restricted and others which were simply private and impossible to visit. to visit. But the title also suggests something more poignant: the idea of ​​the house Ulysses is looking for.

Al-Ghoussein’s death came as a surprise: he had just turned 60 and was in good health. He had recently been appointed to lead the new MFA program at NYUAD, cementing his work as a teacher.

“His importance was not only in the ecosystem of the world of culture, but he was also very important as an educator,” explains Sunny Rahbar, his gallerist at Third Line, who began representing him in 2008. “He was a hard worker. he didn’t shoot, he taught.

Many of his students are now established artists themselves, such as Lamya Gargash, who represented the UAE at the Venice Biennale in 2009.

He has also been an informal supporter, both within and beyond the parameters of the UAE art world. Kuwaiti-Palestinian photojournalist Laura Boushnak notes his influence on her work; Sueraya Shaheen, Editor of Photography Magazine Tribe, recalls him as a passionate defender. He was a faithful friend of the painter Mohammed Al Mazrouei, and spoke with pride of the various projects of curator Munira Al Sayegh.

Rahbar says he was constantly sending her portfolios of young artists to see, in case she was interested in putting them in shows. He was always on the end of a Zoom link or Botim call, turning every little request into a collaboration.

Al-Ghoussein has had a long list of accolades, such as the many biennials and exhibitions he has appeared in, or the prestigious museum collections that own his work. These include the Guggenheim, Smithsonian, Victoria & Albert, British Museum, Abu Dhabi Music and Arts Foundation, Barjeel Art Foundation and Sharjah Art Foundation.

But probably the strongest testimony to his character is the expressions of mourning in the artistic community. He held his students to high standards – for many, higher standards than other teachers had challenged them with – and he maintained the same for himself.