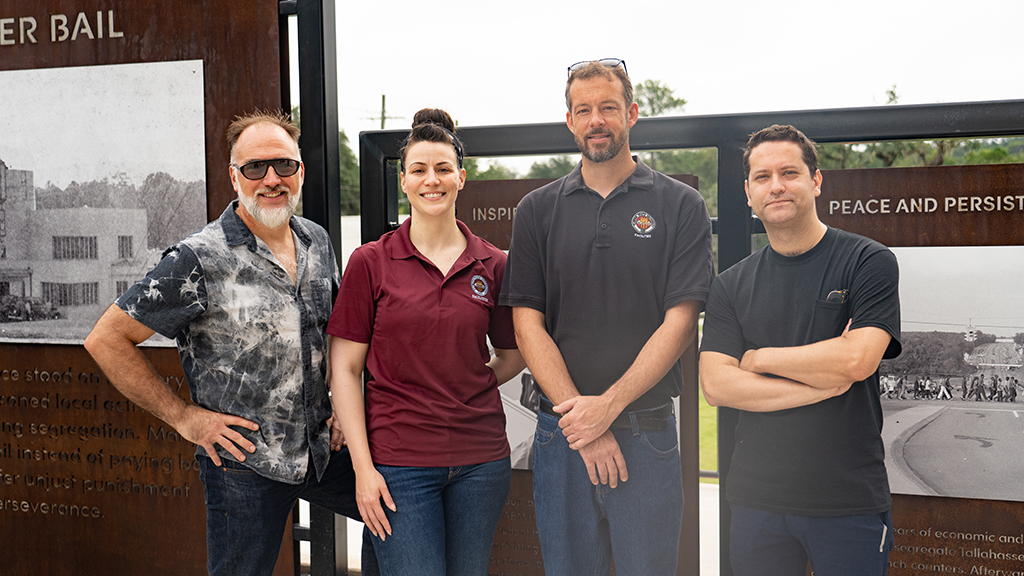 Located near East Gaines and South Gadsden streets, the Tallahassee Civil Rights Memorial and Four Corners of History exhibit is the result of a commemoration process spanning several years of historical research and community input.

“Working on the monument has been an honor and an opportunity to learn more about the city’s architectural heritage, the history of the community, and the people who have supported and fought for equal rights,” said Phil Gleason, production supervisor at Master Craftsman Studio, or MCS.

In conjunction with the Cascades Historic User Group, North American Properties, and Taproot, MCS led the design, fabrication, and installation of the exhibits from November 2020 through February 2022. From user group design to installation, the piece took nearly five years to complete.

The double-sided monument includes black and white photographs and text that mark the events leading up to and following the incarceration. A central panel that reads “Jail Over Bail” represents the site on which the monument was erected. The reverse features a reproduction of a letter written by Dr. Martin Luther King Jr. to Tallahassee activists and the names of Tallahassee’s civil rights “foot soldiers.”

The Four Corners of History exhibition refers to the significant architectural heritage of Modern Art at the intersection of East Gaines and South Gadsden. Made of aluminum, the five-foot-tall monument represents several existing historic structures, including the Old Town Aqueduct, Caroline Brevard Grammar School, the former Leon County Health Unit and the former jail site. of Leon County.

The exhibit uses historic photographs and text to draw attention to architectural detail and the growing importance of public institutions at the turn of the 19th century.

"Who was Georgia O'Keeffe?" look at the Kahlo, the friendship of the artist