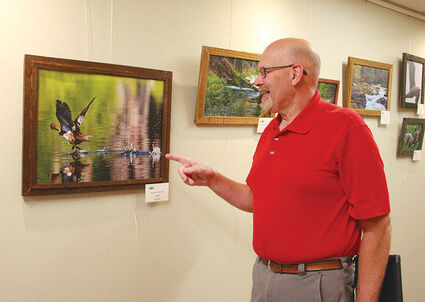 It’s never too late to pursue your dreams.

Photographer Craig Fentiman has been filming outdoor adventures since he was a teenager. But after retiring last year, he decided to pursue this lifelong passion more full-time.

And now 22 of his works over the past half-decade can be seen in a Sweet Home Coalition for Artistic and Scholastic Enrichment exhibit, which opened September 12 for six weeks at City Hall. . (An artists’ reception was held on Friday, September 16.)

Fentiman, a lifelong outdoor enthusiast, first became interested in photography while living in California about half a century ago, while hiking and fishing trips as a teenager. . He started taking photos in 1972 and even has old slides from his hike in Yosemite National Park.

He graduated from La Cañada High School in La Cañada Flintridge, California in 1974, then moved to Oregon to attend Oregon State University, where he graduated in 1981 with a Bachelor of Science in Forest Management with a major in Business.

He arrived at Sweet Home soon after, working as a Farmers Insurance agent from 1981 until his retirement in April 2021.

Despite decades of experience in photography, however, he only started “taking pictures” when he was about to sell his insurance agency and retire.

These days, he continues to find inspiration in open spaces, chronicling various nature scenes and his border collie, Keta. Other subjects have included ducks, herons and butterflies.

His favorite, however, is a close-up of a snail he caught in his yard.

“I love my snail, because of the details,” he explained. “It was so cool. And, basically, I saved it, because the dog was going to run over it. So I took a picture of it, and then I pushed it away.”

Of all his photos on display, he said two of a hummingbird were the most difficult to achieve, due to the lighting.

“It was early in the morning and the sun was coming directly at me,” he recalls. “The hummingbird came once, so I set the aperture and shutter speed I wanted. And then it came back.”

“They really love this place,” he said of the hummingbirds. “I would sit there in the morning. It probably took me about a week. I was able to sit there and watch constantly. It just took time.”

Fentiman said he tries to think outside the box and strives for minimal editing.

“I try to capture things that normally people wouldn’t see and make them unique,” he said. “I’m just trying to make it as real as possible. What you see are real colors. … You can’t edit a bad photo. You have to have a good photo to start editing.”

While most of his work comes from Oregon and California, he took a trip to New Zealand in 2013, where he photographed yellow-eyed penguins, among other subjects.

Fentiman has also been a fan of carpentry since he started the carpentry shop in high school, so he creates handmade frames for his pieces, using reclaimed wood, which makes the process of building frames easier. laborious. But he likes his atmosphere. “I could sand it down and paint it and make it smooth, but I like the character,” he said. “I like the way it looks and the effect it gives to my stuff.”

Craig Fentiman shows a photo he took of a wood duck.

His weapon of choice is a Canon EOS R mirrorless digital camera, an abrupt technological upgrade from his photographic roots.

Fentiman lives in Sweet Home with his wife, Penny, and their two dogs and three cats. The couple have an adult daughter, Angela Fentiman.

In addition to Town Hall, her work can be seen in her Etsy shop, http://www.etsy.com/shop/CFentimanphotography.