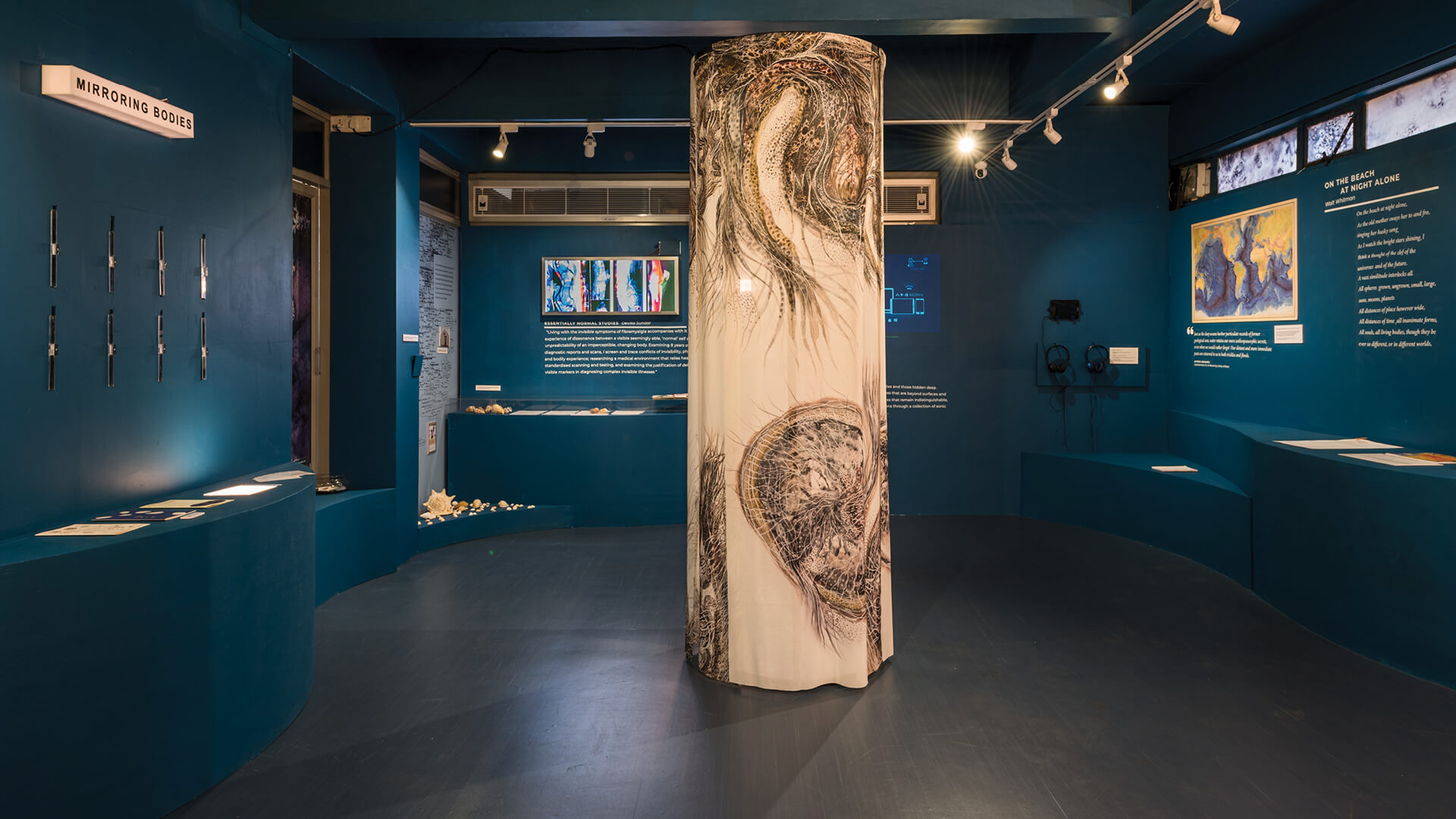 body at sea is an archival exhibition curated by contemporary artist Devika Sunder in collaboration with Studio Slip, which runs until December 2022 at the National Center for Biological Sciences (NCBS) Archives Gallery in Bengaluru, India. The exhibition is a year-long project that features works by Devika Sunder, author Astrida Neimanis, sound artist Yolande Harris, scientist and illustrator Ipsa Jain, marine photographer Umeed Mistry and photographer Rohan Chakravarty. The design of the exhibition as it was put together by Studio Slip, directed by Kamini Rao, was essential to the realization of the project as a sensory and immersive installation that depends on interaction and reception. public.

Studio Slip’s Kamini Rao tells STIR, “A lot of the themes explored are about tracing, mapping, and discovery, and we wanted the viewer to have those acts in the immersive exhibit as well, through interactive features.” The interaction is at the point of discovery, where viewers are encouraged to selectively interact with the media presented in the exhibition and produce their own meanings within the context of an interdisciplinary exploration that blurs the boundaries between science and the humanities.

As an extension of archival material available at NCBS, Sunder proposed a project that explored parallel bodies – water and man, through speculative forms. The Indian artist explains to STIR: “At that time, I was exploring certain themes in my practice, such as ideas around invisibility, physicality – how we situate belonging to our body, also trying to reimagine the body outside the sterile and static frames of medicine. imagery.”

Situating the pulse of the exhibition somewhere between sterile imagery and poetic form, the space takes on the appearance of an aquarium since the archives are located in a basement with only flashing lights, where one does not know if this are they watching or being watched. Sunder speaks of this: “In terms of bringing together the archives, we had three broader headings – tracing the unknown and the mystery of these two environments, reflecting the bodies, and the visual synergy and kinship – what is our relationship as humans with the ocean? ”

The pair told STIR about the starting point of their research, a neuroscientist named KS Krishnan whose research into the pharmacological potential of cone snail toxins as painkillers populates the NCBS archives. The team used letters, seashells and other archival material produced by the scientist, who spoke of a sense of interdisciplinarity, blurring the lines between discovery and scientific exploration. Taking place somewhere between the known and the unknown, from the ocean to the science lab, we wander along a trail of poetic similarities and narrative perspectives uncovered by the curators.

As Rao explains, “By working with archives and with medical and aquatic forms, I wanted to reinvent the space as an aquarium and a medical laboratory. I think we managed to make it this interesting space where you don’t know if you’re in the floating aquarium or if you’re looking inside. The mirror nature of the zoomed-in body, whether through the consideration of archival audiovisual material, drawings, or even the pumping sound of the MRI as recorded by Sunder in one of his works, Essentially normal studiesbecomes a point of contact where the strange quality is highlighted, in a search for the unknowable. The effect is produced to create a feeling of discomfort, secretly explored through the art display.

By deepening the oceanic body as proposed by the exhibition space which is intended to be interactive through various elements that take shape in the form of lighting, recordings, research material, etc., the microcosm that the body presents human, we value a sense of visual uncanny symmetry. Through the marine images of Umeed Mistry, we can examine the internal formology of our guts. The presentation of the exhibition creates a space somewhere between a laboratory and a museum, with showcases containing archival documents. By evoking classification systems, through the opening of what almost appears as a cabinet of curiosities, we also wonder about the violence of scientific exploration and the neutral dimension that presents itself as an ideal of the Enlightenment around the idea of ​​human discovery, notably put forward by the Europeans of the 19th century. Classification systems veil the invisible processes of dissection, discretization, extraction, penetration, etc., all of which aim to make the unknowable seem. By designating the masculinist ideal of “conquest” as an imperialist ideology, one cannot help but refer to the unease created by the atmosphere of the exhibition.

The finalists named for the first black artist award