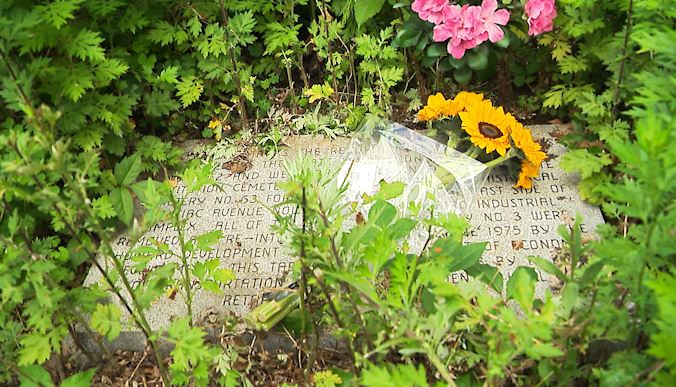 CRANSTON, RI (WPRI) – A mass grave in Cranston with nearly 600 bodies is being cleared and set up so relatives and others can come and pay their respects.

In the fall, Target 12 helped Maria da Graca end more than a decade of searching for her great-great-grandfather’s displaced grave, discovering that he was one of 577 bodies unearthed by the state and reburied in a mass grave in 1975 to make way for an industrial complex.

But because the mass burial site was overgrown in the fall, da Graca could not find the marker indicating where his relative, Antonio Coelho, and the others were buried.

After the Pawtuxet River Authority spent about a month clearing the trees and vegetation at the site in June, Target 12 met da Graca at State Institution No. 2 Cemetery to show him the final resting place of Coelho for the first time.

“Rest in peace, you and everyone else,” da Graca said through tears as she placed the sunflowers she brought on the marker commemorating the mass grave. “My grandmother said these were her favorites.”

The Providence Children’s Museum has featured Coelho in an exhibit since it opened in 1997.

Coelho was the first person from Cape Verde to purchase an ocean liner in 1891, helping immigrants come to work in Providence and ferrying mail, money, and clothing to their families back home.

Da Graca said Coelho went even further, at one point saving thousands of people from a drought in Cape Verde.

But research shows that due to prejudice against immigrants at the time, Coelho ultimately lost his business and spent his final years in a public institution for the poor, sick and mentally ill.

“It’s just sad that it happens to anyone – not just him, but anyone,” da Graca said.

Pegee Malcolm, chair of the Rhode Island Advisory Board on Historic Cemeteries, said she’s glad the Pawtuxet River Authority is working in the area, but says there’s more to be done.

“These people need and deserve the respect everyone receives,” she said. “I can’t wait to see when it’s mowed and cleaned and people can come and visit.”

Larry Berman, a House spokesman, said Shekarchi “is very supportive of the idea of ​​having kiosks” that would list the names of people buried there.

Berman told Target 12 the House can spend $1 million on legislative grants, and Berman said Shekarchi plans to use some of that funding for newsstands.

Target 12 interviewed a former state photographer in the fall, Chester Browning, who keeps records and photos of the state institution’s cemeteries, and he gave the names of 560 of those buried in the mass grave. , including Coelho.

Browning was there that day in 1975 and photographed the dug up bodies. He said the remains of 20 to 40 bodies were placed in trash bags and then collected in cement boxes before being transported and reburied at the cemetery at State Institution No. 2.

“I don’t believe this should have ever happened,” Malcolm said. “Laws have changed, and the way people think about the dead, especially people who died poor.”

But even if the kiosk is built and the mass burial site is landscaped with grass replacing the trees and weeds, da Graca said his job would not be done.

“I’m grateful, but my goal is always to get him out of that ditch,” da Graca said. “I have faith in God, and that’s all I can do. I pray and work on it every day.

Tolly Taylor ([email protected]) is a Target 12 investigative reporter for 12 News. Connect with him on Twitter and on Facebook

Frick's first-ever solo exhibition for an artist of color will combine the elegant portraits of Barkley L. Hendricks with his fabulous collection of Old Masters